Nigeria: Day One of Indefinite Strike:

Nigeria: Day One of Indefinite Strike:


Nigeria: Day One of Indefinite Strike: 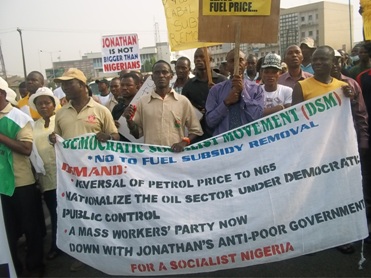 On Monday 9th January, tens of thousands of Nigerians marched through the streets of Lagos in demonstration against the removal of fuel subsidy by the Nigerian government. As a result of this policy, petroleum price has shot up from N65 to between N140 to N200. Cost of food, transport and basic services have soared by several percentage points as the market reacts.

Meanwhile salary remains fixated despite equally soaring inflation while the N18, 000 national minimum wage remains unpaid in a lot of states. It is only against this background that the huge burst of anger of the mass of working and poor people so early in the New Year can be understood.

This vicious anti-poor policy has sparked mass protests (some spontaneous) across the country since January 2nd. In Kano and Abuja attempts have been made to occupy public places in emulation of the Arab Spring and the mass protests against austerity across Europe and the US. Many of these courageous actions by enraged masses of working people, poor and youths have been met with brutal police repression like in Ilorin in Kwara State where the first casualty of the movement was recorded.

As early as 5am, tens of people could be seen gathered around bus-stops in Lagos and across the country. Bon fires and barricades announced to people in the community that the mass revolt had started.

It was the biggest and most widespread movement in Nigeria and in particular Lagos since the return to civil rule. In Lagos, tens of thousands marched from the Nigeria Labour Congress (NLC) Secretariat in Yaba. Those who could not make the central protest organized pockets of actions in their communities and neighborhoods.

Both working class and middle class elements were actively involved in the protest march. Associations of medical doctors and lawyers were ably represented. The medical doctors provided ambulance while musicians came to Gani Fawehinmi park (the terminus of the movement) to entertain protesters.

Everywhere, every major and even community roads were deserted. Shops, markets and offices were closed. The ubiquitous danfo buses were on holiday, so also were the Bus Rapid Transport (BRT) buses which attempted to break the Joint Action Front (JAF) protest on January 3rd. On most roads inside the communities, young people could be seen playing football. 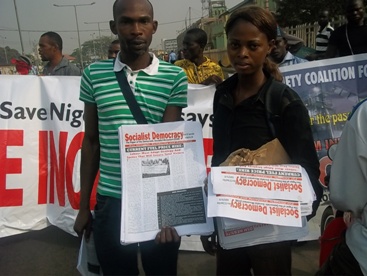 Unlike other mass protests in which trade unionists and activists exert effort to barricades to enforce the directives of the strike, in this case the masses came out on their own to junctions and barricade points. At Agbotikuyo bus stop for instance where DSM comrades played prominent roles, efforts by the police to break the barricade was frustrated when the mass of people came out. About 1, 000 marched from the bus stop, close to DSM national secretariat, to other areas in Agege. By the time the march got to Iyana-Ipaja along the Lagos-Abeokuta expressway the protesters grew to 3,000.

Also in Ijaye area of Lagos as soon as the members and leaders of the Joint Action Front arrived at the bus-stop, the protest began. Lanre Arogundade, a member of the Democratic Socialist Movement, addressed the crowd at the bus-stop. He explained the economic implications of the anti-poor policy and called on on-lookers to join the demonstration. This was followed by the chanting of anti-government songs, distribution of fliers and display of placards carrying different messages.

The placards carried by protesters bored messages like “Nigerian masses say no to fuel subsidy removal”, “Deal with the cabal not the masses”, “N65 fuel price not negotiable”, “Jonathan must go”, “For a mass workers party” etc. Those who could not join the demonstration expressed their support for the nationwide strike and mass action and called on President Goodluck Jonathan to immediately reverse the fuel subsidy removal in the interest of the already impoverished Nigerians. Onlookers also joined in chanting anti-government songs. In fact, a particular song became the anthem of the protest, “Jonathan ole PDP ole”, a Yoruba song meaning Jonathan is a thief, PDP is a thief. One middle-aged woman expressed her disappointment with the Jonathan presidency and demanded for her vote. In her words “Jonathan has disappointed me, I voted for him in the last presidential election and I want my vote back”.

The leaflet produced by the Democratic Socialist Movement (DSM) condemns the present economic system and called for its replacement with an alternative socialist system based upon to the nationalization of the commanding heights of the economy to allow the democratic control and planning of the use of the country’s resources in the interests of the majority.

As we moved through the streets of Lagos, some streets were turned to football fields, roads, markets and workplaces were deserted. Some of those who conveyed at newspaper sales joint sto read the dailies eventually joined the protest train. The officers of the Nigerian Police Force comported themselves and did not interfere with the protest; in fact, some openly expressed their support for the nationwide strike and demonstrations.

However one young man, identified as Aderinola Ademola, was shot dead by a trigger-happy policeman while three others were injured and are presently recuperating in a private hospital. According to eye witness accounts, they were reportedly shot by CSP Segun Fabunmi while playing football peacefully on the road. While the State Police Commissioner claims the CSP has been arrested and detained, this cannot really be verified.

There is the need to open a campaign on this brutality against protesters. This becomes more important given the vicious police brutality in other places like Kano where at least one protester was also reportedly shot dead today. There are reports of other dead around the country. In Enugu state Governor Chime issued a decree banning all public protests. 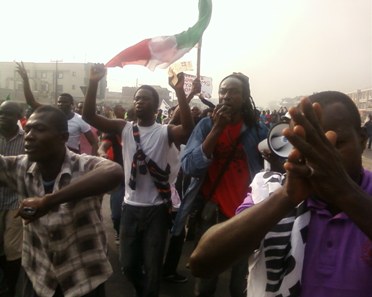 Report from other states shows essentially the same shutdown. Over 2,000 marched in Benin, Edo State where 214 copies of SD (“Socialist Democracy”, the DSM’s paper) were sold. In Osun State about 3,000 marched; comrades sold over 468 copies of SD. Over 600 copies of SD were sold in Lagos. In Lagos, the Agege community action committee meeting on Sunday, initiated by DSM comrades, was attended by over 70. In the Ajegunle district of Lagos 55 copies of SD were sold in the community on the eve of the general strike at the public meeting organized by DSM comrades and others. In many communities, action committees initiated by different affiliates and collaborators of the Joint Action Front (JAF) are meeting and mobilizations and actions carried out independent of the central plan. All this shows the depth of anger in society.

In our materials, the DSM is calling for the building of democratic mass action committees in communities, workplaces and campuses to act as the platform to involve more people in the struggle. We are also calling for a consistent struggle against this attack and other anti-poor policies. While noting the correctness of the demand for immediate reversal of pump price of fuel to N65 per litre, we argue that even this is not enough.

While the January 1st removal of fuel subsidy acted as a spark, the real basis of peoples’ anger is the anti-poor and neo-liberal attacks of the last one decade and more. Youth unemployment is a frightening 42% (over 28 million). Education and health is commercialized, road networks and public electricity have virtually collapsed. For many, especially the youth, the future is bleak under the ferociously anti-poor policies of capitalism.

This is why socialists call for a struggle not just against fuel subsidy removal/fuel price hike but also against all anti-poor policies. Our slogan is “Down with Jonathan’s anti-poor government, for a workers and poor people’s government”.

We believe that to ensure total liberation from this miserable life where just 1% corner over 80% of society’s resources, there is the need for a revolution to chase out the government of capitalist looters and put in their place a workers and poor peoples’ government that can run society in the interests of the millions and not the millionaires. Part of this struggle is the building of a mass workers party armed with socialist programs and policies of public ownership of the oil sector and the economy under the democratic control and management of the working masses.

Jonathan and co. hope to be able to sit this struggle out, hoping that poverty, food shortages etc. will break the strike. This is why it is essential that Labour continues to go onto the offensive. This capitalist society is going no-where, it is at a dead-end, Labour must use this moment to build its own alternative that can swept away the thieving gangs that loot this country and the capitalist system that has proved incapable of developing the nation. Such is the power of the current strike that it is possible that the government may offer concessions, but we have seen before temporary concessions being used by the ruling class to buy time for themselves by damping down the struggle. Instead of allowing the ruling class to continue to rule and exploit Labour must utilize this mass movement not just to reverse the fuel price hike but as a springboard to create workers and poor peoples’ government that can begin a real revolution by breaking with capitalism.