Copenhagen climate summit Save the planet – fight capitalism! Democratic planning the only solution CWI leaflet for Copenhagen climate summitt Just before this summit, new alarming facts were released: Carbon dioxide levels have reached 385.2 ppm â€“ the highest level for 650,000 years, according to WMO (World Meteorological Organistion). Despite the Kyoto deal in 1997, carbon dioxide emissions have increased

Copenhagen climate summit Protests met with police brutality Strong mood against capitalism – and its police force Almost 1,000 arrested, only three of them charged By Elin Gauffin, Karin Wallmark and Amer Mohammed Ali, RÃ¤ttvisepartiet Socialisterna (CWI Sweden) The climate demonstration in Copenhagen on 12 December, with over 100,000 participants, was the biggest climate protest ever. It had a strong

Recession, Recovery, Banks, and Bubbles – Workers Face Jobless Recovery Printer-Friendly Oct 28, 2009 By Alan Jones, Socialist Alternative (CWI in USA) The stock market reached the 10,000 mark in the middle of October. Wall Street investment banks like Goldman Sachs were preparing to dole out a record $140 billion in pay to their traders. If you only watch the 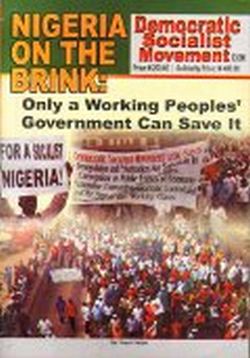 NIGERIA ON THE BRINK

Only a Working Peoples’ Government can save it INTRODUCTION It is 30 months this November that the government of Umaru Musa Yar’Adua has been in office, albeit through the most farcical election in annals of Nigeria. Like in the 8-year rule (or ruination of Nigerian economy) of his predecessor and mentor, Olusegun Obasanjo, Yar’Adua government has unleashed severe neo-liberal attacks

Continue reading “NIGERIA ON THE BRINK”

NIGERIA ON THE BRINK:

NIGERIA ON THE BRINK: Nigeria on the brink Only a Working Peoples’ Government can save it INTRODUCTION It is 30 months this November that the government of Umaru Musa Yar’Adua has been in office, albeit through the most farcical election in annals of Nigeria. Like in the 8-year rule (or ruination of Nigerian economy) of his predecessor and mentor, Olusegun

Continue reading “NIGERIA ON THE BRINK:”

OSHIOMHOLE: ONE YEAR AFTER

OSHIOMHOLE: ONE YEAR AFTER Time to Build Labour Party and Implement Working Class Oriented Policies It would appear as if the government of Adams Oshiomhole in Edo State has lasted more than one year. This is because it has drawn wide range attention, both locally and internationally and a host of controversies, especially generated by the defeated PDP. Adams is

Continue reading “OSHIOMHOLE: ONE YEAR AFTER”

Stalinism and after: On the 20th anniversary of 1989

History Socialism Today Stalinism and after On the 20th anniversary of 1989 Peter Taaffe, General Secretary, Socialist Party (CWI in England & Wales). Article from Socialism Today, magazine of the Socialist Party. When the Berlin wall was dismantled in 1989 and Stalinist regimes came crashing down, capitalism declared itself victorious. The collapse of Stalinism was used in a global ideological

Continue reading “Stalinism and after: On the 20th anniversary of 1989”

DSM leaflet for October 29 NLC rally in Abuja DEREGULATION: AFTER THE RALLIES Labour Must Declare and Mobilise for a 2-Day Warning General Strike and Mass Protest Now! The Democratic Socialist Movement (DSM) supports the struggle of Nigerian working masses against deregulation and for N52, 200 Minimum Wage. Since May 13, 2009, the Labour and Civil Society Coalition (LASCO) has

DAY LIGHT ASSASINATION OF BAYO OHU: THE MAIN ISSUES INVOLVED Segun Sango, General Secretary, Democratic Socialist Movement The Democratic Socialist Movement (DSM) deeply condoles with the wife and young children left behind by Bayo Ohu, the Assistant News Editor of the Guardian Newspapers Limited, who was murdered in broad day light at his residence in Egbeda, in the Alimosho Local

ASUU VICTORY A PRODUCT OF STRUGGLES

ASUU VICTORY A PRODUCT OF STRUGGLES Joint Action of All Education Workers and Students Needed to Compel Government to Implement Agreements. Segun Sango, DSM General Secretary The Democratic Socialist Movement (DSM) welcomes the signing of the agreement between the Federal Government and Academic Staff Union of Universities (ASUU). This is a victory for struggle that the union had waged for

LAGBUS 4 Update: THE CASE OF 4 LAGBUS BRT WORKERS ADJOURNED TO NOVEMBER 16 2009 Mr. Mark Marvelous, Mr. Olanrewaju Babatunde, Mr. Toyin Taiwo and Mr. Jeffery Okosi (left to right) – the Lagbus 4 COMPANY’S COMPLAINANT AND THE POLICE FAILED TO APPEAR IN COURT The case of the 4 BRT Lagbus workers charged to court for embarking on strike

History 60th anniversary of Chinese Revolution Capitalism abolished, but power in hands of Stalinist Communist Party Survivors of the long march Vincent Kolo, chinaworker.info It is an especially nervous Communist Party (CCP) regime that presides over the 60th anniversary celebrations of the founding of the People’s Republic of China on 1 October. The regime is increasingly dependent on Olympic-style pageantry

Protest in Benin While the Nigerian capitalist ruling elite marked this year Nation’s independence anniversary in gloom, hundreds of students took to the streets in Lagos, Benin in Edo State and Ilesa in Osun State, in condemnation of the Yar’Adua anti-poor government for failing to meet its social responsibilities to the people especially in the area of education. On October