A call for donations to replace comrade’s phone snatched in the protest On Monday December 23, 2019, a coalition of civil society organizations organized demonstration to the National Human Rights Commission in Abuja and Lagos to protest the continued detention of Omoyele Sowore and other activists by Buhari government in violation of court order. Members of the Democratic Socialist Movement

The Education Rights Campaign (ERC) vehemently condemns the illegal arrest and detention of Yahuza Tijjani, a 200 level student of the Department of Science and Technology Education, Bayero University, Kano (BUK). He was arrested on 30th September, 2019 for allegedly criticizing a lawmaker representing Madobi Local Government Area in the Kano State Assembly. He has since that time been under

Abbey Trotsky vs Police and Sumal Foods Ibadan: A call for Solidarity Actions

Matter comes up Thursday October 24, 2019 at Magistrate Court Iyaganku, Ibadan By Peluola Adewale The trial of Abiodun Bamigboye (Abbey Trotsky), Acting National Chairperson of the Socialist Party of Nigeria (SPN) and Oyo State Coordinator of the Campaign for Democratic and Workers Rights (CDWR) over trumped-up charges by the police at instance of Sumal Foods, Ibadan will come up

FINANCIAL APPEAL FOR A CAMPAIGN ON MINIMUM WAGE, CASUALISATION AND AGAINST STATE HARRASMENT OF ABBEY TROTSKY

Continue reading “FINANCIAL APPEAL FOR A CAMPAIGN ON MINIMUM WAGE, CASUALISATION AND AGAINST STATE HARRASMENT OF ABBEY TROTSKY”

CLOSURE OF BORDER IS NOT A SOLUTION

MASSIVE PUBLIC INVESTMENT IN AGRICULTURE AND BASIC COMMODITIES IS THE WAY-OUT The closure of border on August 19, 2019 has created more crises for the working masses than they already have considering the rapid rising cost of consumables most of which are imported through the Seme border via Republic of Benin. The closure has provoked increment of prices of some

Continue reading “CLOSURE OF BORDER IS NOT A SOLUTION”

RELEASE OMOYELE SOWORE AND ALL OTHER POLITICALLY-DETAINED ACTIVISTS NOW

The Socialist Party of Nigeria (SPN) condemns in strongest terms the continued detention of Omoyele Sowore by the DSS despite a court order and having fulfilled the bail conditions. We hereby demand the immediate and unconditional release of Sowore alongside Olawale Adebayo (Mandate), who has been detained since August 5 RevolutionNow protest, Agba Jalingo who has been detained in Cross

GANI FAWEHINMI: DEFIANCE AS A CAUSE

GANI FAWEHINMI: DEFIANCE AS A CAUSE By Lanre Arogundade and Hassan Soweto Gani lived a life that was quintessentially defined by uncommon defiance of manifestations of abuse of power, especially corruption at the top levels of society and governance. He simply detested such and fought it with all he had in his nerves and veins. The echoes of the beneficial

Continue reading “GANI FAWEHINMI: DEFIANCE AS A CAUSE”

First posted on September 11, 2009 The National Executive Committee (NEC) of the Democratic Socialist Movement (DSM) condoles with the family of Chief Gani Fawehinmi on the death of an outstanding working peoples’ leader and joins millions of working class people in Nigeria and internationally to celebrate his life and struggles. We reaffirm our dedication to the best of the

RELEASE OMOYELE SOWORE AND ALL DETAINED ACTIVISTS AND JOURNALISTS

The Socialist Party of Nigeria (SPN) and the Democratic Socialist Movement (DSM) hereby demand immediate and unconditional release of the Presidential candidate of the African Action Congress (AAC) and Sahara Reporters Publisher, Omoyele Sowore. We also demand the release of all activists and journalists and a halt to all attacks on democratic rights. In the same vein, we demand an

The Socialist Party Nigeria (SPN) strongly condemns the judicial contrivance of the federal government obtained through an order of the Federal High Court to detain Omoyele Sowore for another 45 days. We restate our demand for immediate and unconditional release of Omoyele Sowore as well as all detained activists and journalists. We call for an immediate meeting of civil society

The Socialist Party of Nigeria (SPN) condemns the repression of peaceful protest held in Lagos, Osogbo, Abeokuta and a few other cities nationwide on Monday 5th August 2019 by armed police and other security operatives including the Joint Military Force popularly known as OP MESA. Tear gas and live ammunition were used to disperse the protests. We demand the immediate

The Democratic Socialist Movement (DSM) hereby demands the immediate and unconditional release of the Presidential candidate of the African Action Congress (AAC) in the last General Elections and Sahara Reporters Publisher, Omoyele Sowore. Sowore was arrested midnight on Saturday August 3 by the Department of State Service (DSS). The arrest is obviously connected to stopping Sowore’s call and coordination for

The Socialist Party of Nigeria (SPN) condemns the arrest and detention of Omoyele Sowore, the leader of African Action Congress (AAC) and Publisher of Sahara Reporters by the Department of State Service (DSS) today Saturday August 3, 2019. We demand his immediate and unconditional release. We understand that the arrest of Sowore is not unconnected to a nationwide protest being

The Socialist Party of Nigeria (SPN) holds the President Muhammadu Buhari-led Federal Government of Nigeria responsible for the bloody turnout of the protest by members of Islamic Movement of Nigeria (IMN) to demand the release of their leader, Sheikh El-Zakzaky. We hold the Buhari-led regime responsible based on the failure of the regime to obey all court orders ordering the

LABOUR SHOULD MOBILISE WORKERS FOR A ONE-DAY WARNING GENERAL STRIKE AND MASS PROTEST SPN DEMANDS THE IMPLEMENTATION OF N30, 000 MINIMUM WAGE FOR ALL PUBLIC AND PRIVATE SECTOR WORKERS AND WITHOUT RETRENCHMENT The Socialist Party of Nigeria (SPN) condemns the federal government’s poor handling of the minimum wage implementation. President Buhari’s administration’s continuous delay in the implementation of the N30,

A Call for Solidarity By Davy Fidel After almost three years of deadlock in court, the matter of 584 dockworkers unjustly retrenched by ENL Consortium came up for a hearing on Thursday June 20, 2019 at the National Industrial Court. The workers in their hundreds were already in the court premises around 7:45am to display their banners and chant solidarity

Update: Abbey was released from the Ibadan office of the Department of State Service (DSS) on the evening of Sunday June 9. The secret police claimed that he was only invited for questioning and asked him to help stop the further spread of the news that he was arrested on social media. Obviously as experience has repeated shown, this development 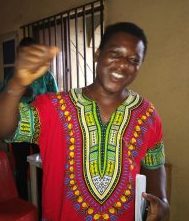 Socialist Democracy May – June 2019 Edition SIGNING OF N30,000 MINIMUM WAGE IS NOT AN END ON ITS OWN The leadership of NLC, TUC and ULC must be ready for a united and concerted struggle to force the full implementation without retrenchment of workers in public and private sectors By Abbey Trotsky After over three years the N18, 000 National

Continue reading “SIGNING OF N30,000 MINIMUM WAGE IS NOT AN END ON ITS OWN”