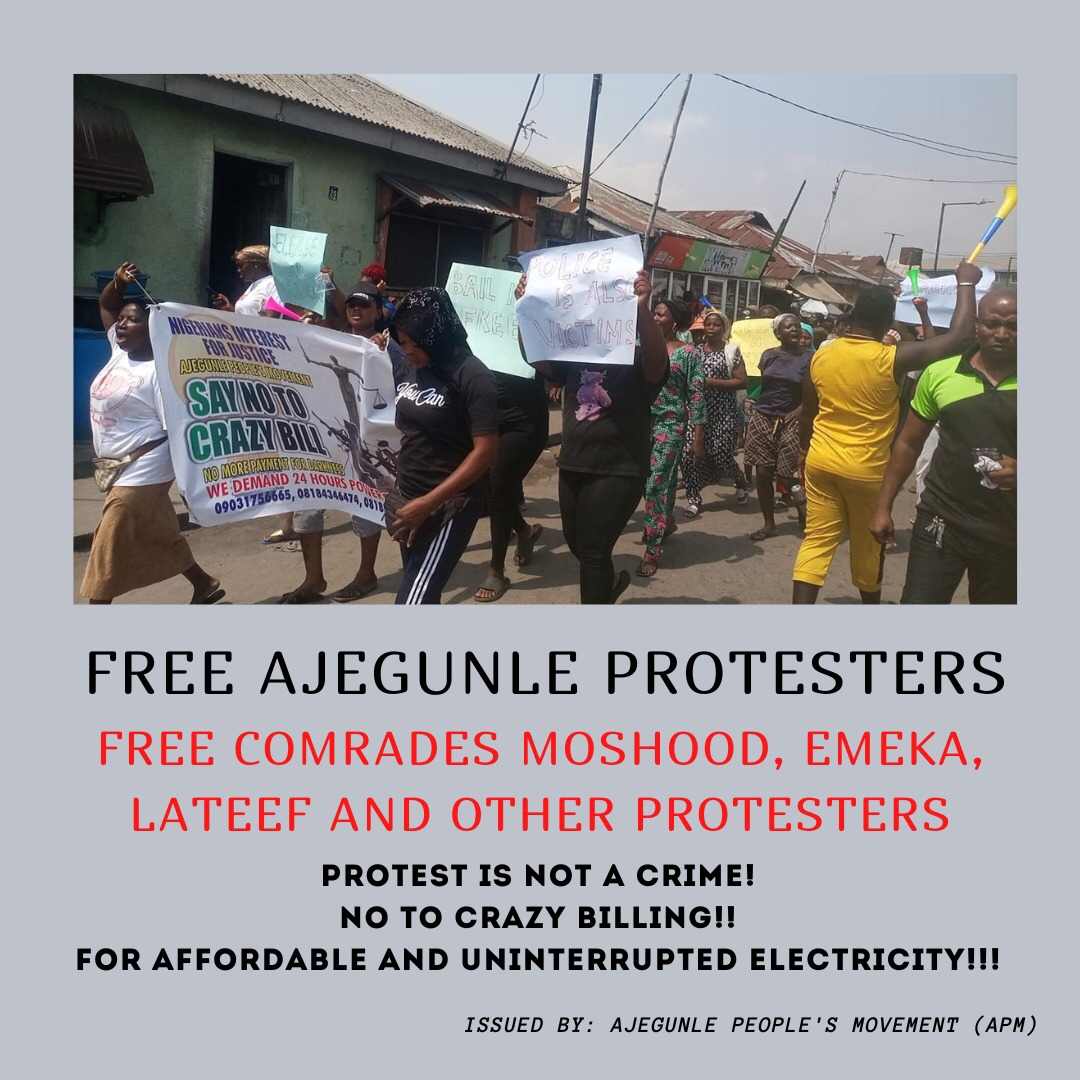 UPDATE Thursday January 26 – all those arrested have now been released, and the struggle against crazy billing continues.

On Wednesday January 25, 2023,  community people, mostly women and youths in the Tolu area of Ajegunle, Apapa, Lagos led by socialists and rights activists trooped out in a peaceful protest against outrageous (crazy) electricity billing issued to community residents by Eko Distribution Company. Rather than attend to the demands of the protesting community people, the Nigeria Police of the Tolu Divisional Police on the order of the management of Eko Distribution Company arrested and detained some of the protesters. Those arrested include Moshood Oshunfurewa (Coordinator of the Ajegunle Peoples Movement and a member of the Democratic Socialist Movement), Lateef Adams (member of the Movement for Socialist Alternative), Emeka Bosah (Coordinator of Ajeromi Ifelodun Community Movement, AICOM), Mrs Stella Edegwa (Community activist), Joseph Chukwudi, Mrs Nana Gloria, Mrs Rose, and 3 others.

Since November 2013 when the power sector was privatized, communities have been continually plunged into darkness while tariff has gone up steadily. The power companies have also refused to issue prepaid meters to residents in order to issue fraudulent estimated bills.

In order to sustain this exploitation, the electricity companies rely on the capitalist government and its state agents of repression, particularly the Nigerian Police whose men and women often use brute force against peaceful and innocent protesters. Many community residents and activists are currently facing trumped-up charges in different courts. We demand an end to police arrest, detention, and attacks on innocent community people and activists.

Coalition for Affordable and Regular Electricity (CARE) demands the immediate and unconditional release of the detained protesters.

We appeal to working people, Nigeria Labour Congress (NLC), Trade Union Congress (TUC) and pro-people organizations in Nigeria and internationally to join the campaign for the immediate and unconditional release of the protesters.

Family members and members of different pro-labour organizations have visited the Tolu Divisional Police Station but the Divisional Police Officer, CSP Etuk Akanyene has refused to release the peaceful protesters. Also apparently at the behest of the electricity company, the police may charge them to court on trumped-up charges.

We appeal for protest calls and messages to be sent to the Lagos State Commissioner of Police, Abiodu Alabi (08033432264) and Tolu Divisional Police Officer, CSP Etuk Akanyene (08034448617) with a call to release all protesters.