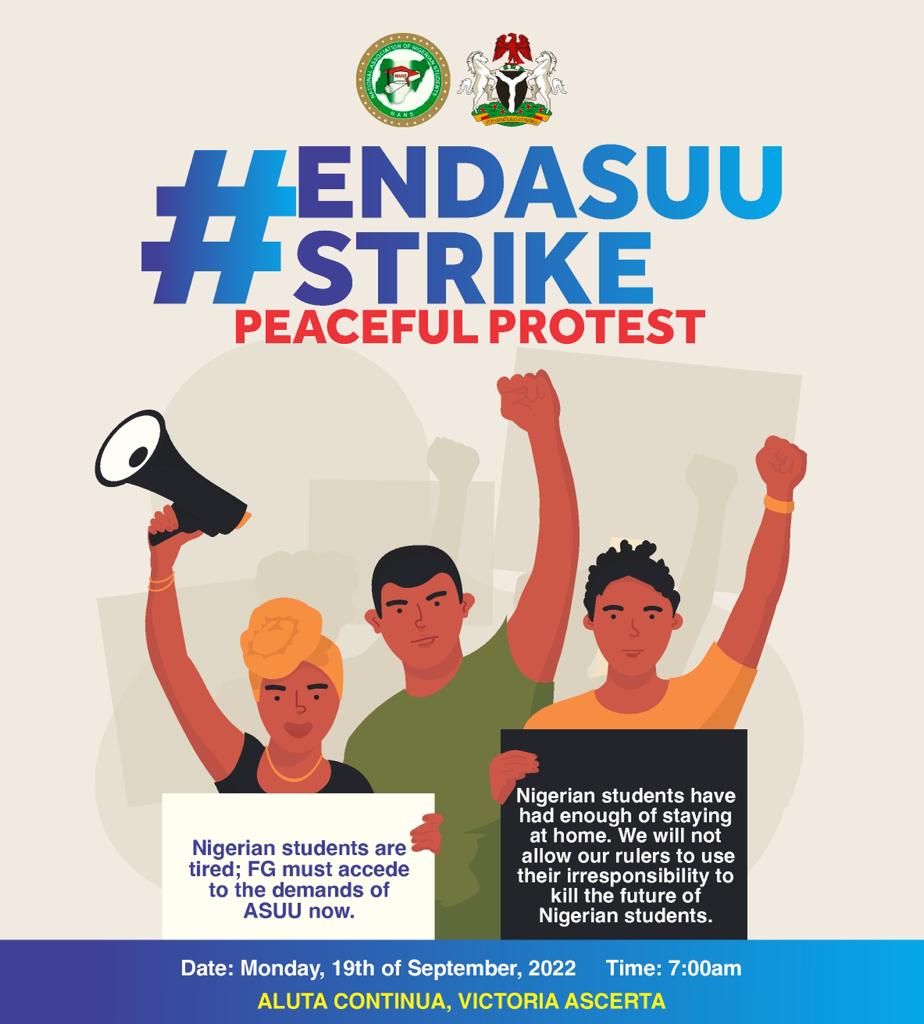 You need to add a widget, row, or prebuilt layout before you’ll see anything here. 🙂

FG MUST MEET DEMANDS OF ASUU AND OTHER UNIONS NOW

WE WELCOME STUDENTS PROTEST FOR IMMEDIATE REOPENING OF PUBLIC UNIVERSITIES

The Education Rights Campaign (ERC) strongly condemns the refusal of the Federal Government to meet the demands of the Academic Staff Union of Universities (ASUU). It is this refusal that has led to the extension of the strike into a total and comprehensive indefinite strike. For us in the ERC there is nowhere to drop the blame for the extension of this strike other than the doorstep of the Buhari anti-poor capitalist government that has woefully failed to take all necessary steps to meet the demands of ASUU. This is because no serious government would fold it hands while the doors of schools are shut to millions of its citizens.

We recall that the strike which started on February 14th was initially a warning strike and was only extended, first by 8 weeks, until more extensions were made, due to the refusal of the government to take seriously the demands of ASUU. These demands fundamentally border on the proper funding of the education sector and the need to adopt the recommended University Transparency and Accountability Solution (UTAS) for payment of salaries, better pay for lecturers, amongst others.

Today, the crisis bedevilling the education sector has deepened, necessary facilities to aid teaching and learning are either absent or in decrepit condition. It is criminal and cruel for any government to continue to look away while the education sector remains in such pathetic condition. While we appreciate that another extension of this strike is painful to students and parents, the only way to ensure this strike comes to an end is to support the agitations of ASUU and force the government to a retreat from its path to destroy public education. In the Education Rights Campaign (ERC) we stand with the agitations of ASUU and enjoin students the Nigerian masses, pro-masses organizations and trade unions to express their support through protests and other forms of political action to ensure the demands of ASUU are met.

For us in the Education Rights Campaign (ERC) the FG’s intimidation tactics like the ‘no work no pay’ rule, the use of industrial court, and threat to proscribe ASUU are bound to fail. In our opinion, the Federal Government has no moral credibility to impose the “No Work, No Pay” rule because the strike embarked upon by ASUU from 14th February 2022 was forced on the union due to Federal Government persistent violation of previous agreements especially the 23rd December 2020 Memorandum of Action, shifting of goal posts and lack of sincerity in its engagement with the union. How can an employer who is the cause of his workers not working lay claim to ‘no work, no pay? It is simply eating one’s cake and trying to still have it back. If successfully implemented, this will mean that government, in its usual nonchalant manner, can continue to throw any agreement with unions into the dustbin.

This is more so that the Buhari government further provoked the extension of the strike by deliberately violating the principle of collective bargaining with its arbitrary imposition of paltry and insulting salary award – something it has been peddling as a fulfillment of the demands of the ASUU.

As a response to these intimidation tactics especially the threat to proscribe ASUU, we again reiterate our call on the leaderships of the Nigeria Labour Congress (NLC) and the Trade Union Congress (TUC) to declare a 48-hour warning general strike and nationwide mass protest. This will send a clear note of warning to the capitalist ruling elite that ASUU is not alone.

Therefore, we welcome the ongoing protest by the current leadership of the National Association of Nigerian Students against the continued closure of universities. After the current round of protest, we urge the NANS to issue an ultimatum to the federal government to meet ASUU demands failing which students would return to the street with a much bigger nationwide protest. At the same time, we call on NANS to convene mass meetings of students at every state to plan and begin to mobilize for the next round of protest.

We also urge the leadership of ASUU to hold a series of mass activities including town hall meeting at every state in order to engage parents, students and the public on their struggle and demands over funding of public university education and the legitimate welfare of their members.

In the ERC, we shall continue to raise the demand for the proper funding of the education sector and its democratic management. The underfunding of education by the Nigerian ruling class is a deliberate act to undermine public education and pave the way for private profiteers. This is already playing out. A major lesson that the ongoing ASUU strike teaches is that the capitalist system that places profit of a few over the well-being of the mass majority cannot ensure a free and quality education for all despite the presence of resources to do so. This is why students and workers must link their struggle to defend public education with the building of a political movement to end the system of capitalism and replace it with a socialist system.

If you agree with us and wants to be part of activities and struggle to defend public education and ensure reopening of Universities, join the ERC today. The ERC is a platform formed by the Democratic Socialist Movement (DSM) to campaign against education funding and against fee hike and attacks on democratic rights.