One Year After: LASU students Remember Omomeewa and Cry for Justice 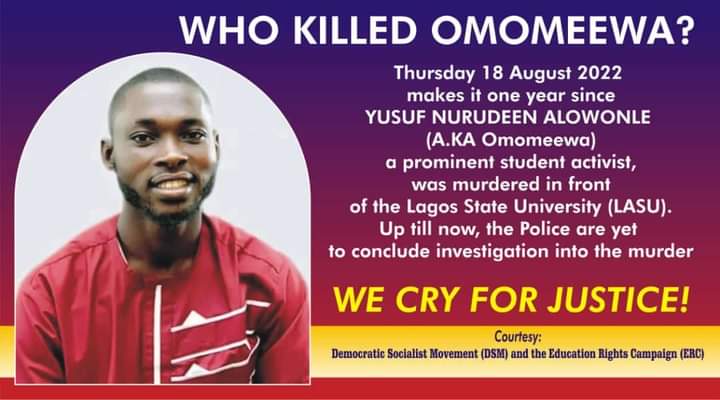 One Year After: LASU students Remember Omomeewa and Cry for Justice

On Thursday 18th of August 2022, the Education Students Association of Nigeria (ESAN-LASU) in conjunction with Education Rights Campaign LASU branch organized a memorial walk around the Faculty of Education, Lagos State University (LASU), to mark the one year remembrance of our late Comrade Yusuf Nurudeen Alowonle (Omomeewa) who was gruesomely murdered by yet to be identified assassins close to the school gate on the 18th of August 2021.

The walk was scheduled to take place by 4pm. Comrades and students converged at the Local Government site, a popular spot at Education Faculty. At about 12:30pm students and comrades of the ERC-LASU were already at the convergence point drumming and singing led by comrades Duro’orike and Bamidele in memory and honor of our deceased comrade. The event also created awareness for many students and demonstrated the significance of the day in remembrance of Omomeewa and his struggle in LASU, and these attracted students to the converging point.

After the songs comrade Duro’Orike, Omomeewa’s closest comrade, addressed the students on the socialist ideology Omomeewa believed in and his struggle on the campus against every anti-student policy by the management, for example the irrational enforcement of backward dress code, introduction of the exploitative stream one and two admissions, and other anti-poor, anti-students policies in LASU, and how Omomeewa was victimized till death by LASU management. After this address, questions were asked by students as almost all had listened with rapt attention. Some of the questions included: “where were the marshals that usually stationed at the school gate when Omomeewa was murdered?”, “why did LASU have to withhold his certificate for a case that they could not prove him guilty of?” Some students added bluntly that “LASU is culpable in Omomeewa’s death and we must continue to raise our voice for justice”.

At exactly 4pm the president of ESAN-LASU Kehinde Sonayon Sunday (SUNNEX) and the faculty speaker Rt. Hon. Nifemi led other executives of the faculty to kick-start the procession in honour of comrade Omomeewa. In attendance were education students, ERC-LASU comrades, friends of Omomeewa like comrade Jigaba, comrade Dario and many others. Comrades gave their tributes to Omomeewa appreciating his role and contributions to humanity and most especially towards the students struggle in LASU. Comrade Duro’Orike, former coordinator ERC-LASU, gave his tribute to Omomeewa and he also advised the leaders of the faculty to ensure that the legacy of Omomeewa is sustained and that Omomeewa is not only dear to Education students but also to LASU students and workers in the society at large.

Comrade Jigaba also described Omomeewa as a great leader and also explained to the students how some of his ideas and active participation were influenced by Omomeewa. He further urged the students to carry on the struggle without fear. Others who also gave tributes included the Faculty speaker, comrade Igbo, comrade Bamidele etc. They all stressed that the fact that cannot be denied of what brought Omomeewa to campus on the day he was killed, was him honoring the invitation by the school to appear before a panel on a phantom case against him by the school management. They urged all students to join their voices in the cry for justice for Omomeewa.

After the tributes the walk started, led by the executives of the faculty of Education, comrade Duro’Orike, ERC-LASU comrades and education students. We walked round the faculty of education mourning Omomeewa and singing solidarity songs, and we came back to Local Government where we did Aluta gyration for few minutes, held a one minute silence for Omomeewa and dispersed.

Copies of the ERC statement on the first anniversary of Omomeewa’s passing were shared to students while 7 copies of Socialist Democracy (SD) – paper of the Democratic Socialist Movement (DSM) – were sold. About 25 students who were inspired by the live and example of Omomeewa showed interest in joining ERC-LASU.