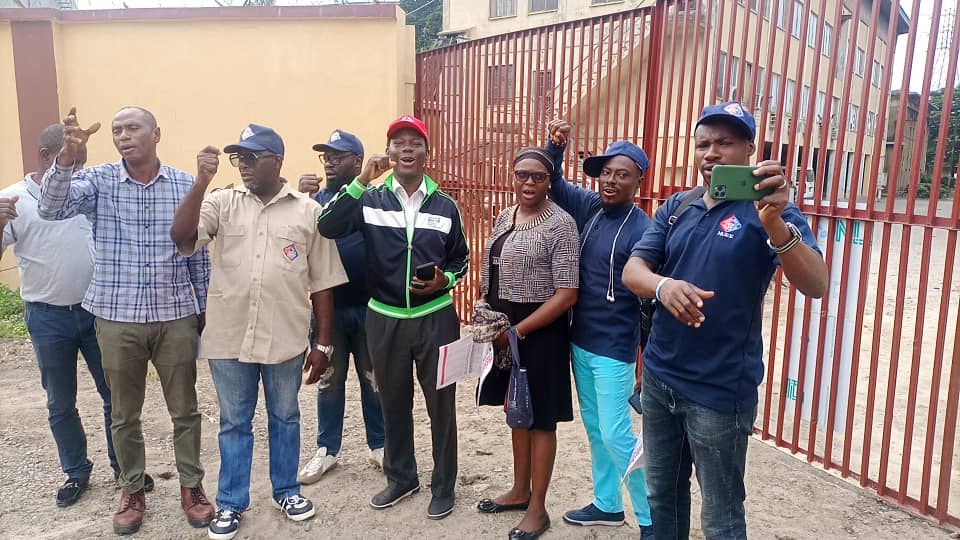 Electricity workers under the joint umbrella of the National Union of Electricity Employees (NUEE) and Senior Staff Association of Electricity and Allied Companies (SSAEC) organised picketing of the Transmission Company of Nigeria (TCN) headquarters and stations on August 16 and 17, when TCN workers began strike action. On the second day of picketing and the first strike day members of the Democratic Socialist Movement (DSM) Ajegunle branch joined the workers at the TCN Station in Ijora-Olopa, Lagos State, to express our solidarity and support.

The electricity workers protested the Federal Government’s failure to honour the signed agreement it voluntarily entered into with the NUEE leadership in December, 2019, on the condition of services, stigmatization and the refusal of market operators to fund the entitlements of staff from the now defunct state owned Power Holding Company of Nigeria (PHCN) and career progression path process, all of which has been carried out unilaterally in the sector without the involvement of the relevant stakeholders.

The strike’s nationwide shutdown of transmission knocked the entire country off the grid for about 24 hours. This demonstrated the collective strength and weight of the workers. This action also compelled the Minister of Labour, Chris Ngige, to return to a roundtable discussion that lasted for hours on Wednesday, August 17, before the two unions suspended the action for another two weeks while all terms and conditions for implementation are worked out.

The electricity workers’ agitation was meant to force the TCN management board, which is still appointed by the Federal Government, and 11 electricity distribution companies (DISCOs) to implement the agreed-upon conditions of service in order to promote a better welfare package and retraining conditions.

It should be noted that, despite the privatisation of the electricity sector at rock bottom prices and different massive bailouts by the Federal Government worth approximately three times the sales, the country has continued to experience poor electricity supply while consumers pay high and exploitative tariffs. Nearly every month community people protest at the various DisCos’ headquarters or stations across the country over poor supply or the extortionate mass estimated billing.

Ten copies of Socialist Democracy (SD), the paper of DSM, were sold at the picketing in Ijora Olopa.