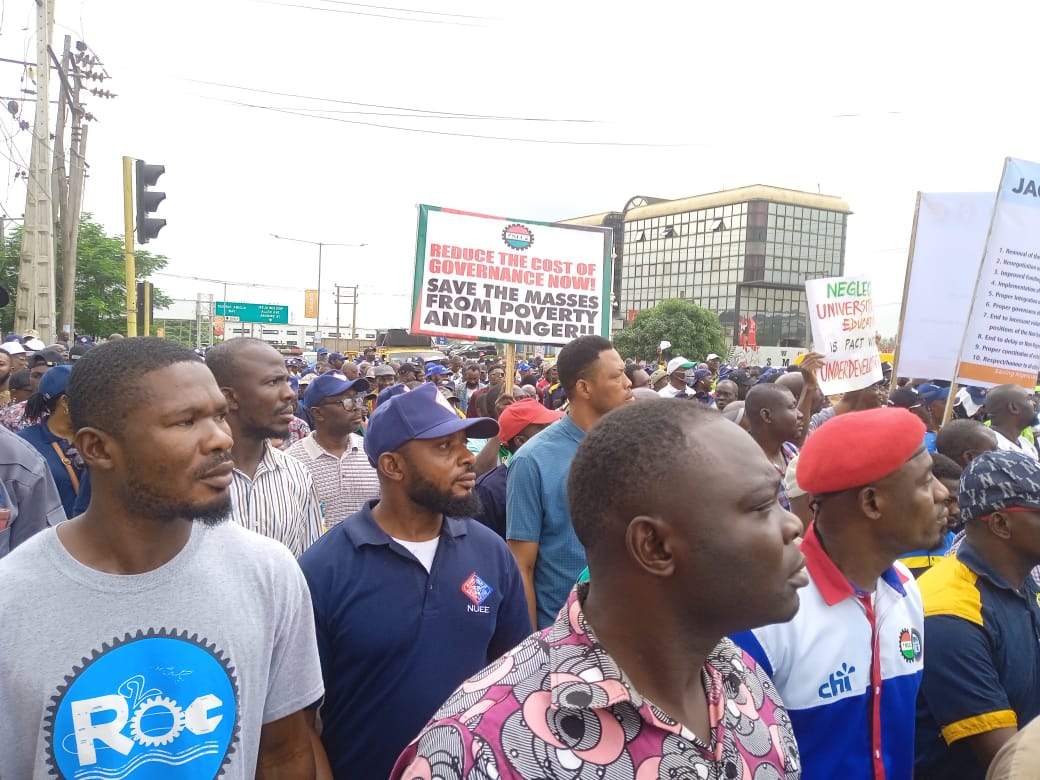 On Tuesday, July 26 2022, there was a huge turnout of workers and other protesters in the state capitals across the country for a nationwide protest called by the Nigeria Labour Congress (NLC) over the continued closure of universities as a result of the failure of the Buhari government to meet the demands of the striking university workers. Wednesday July 27 is the day for the central protest rally in the Federal Capital Territory (FCT) Abuja ending the two-day action.

It was significant that not only Academic Staff Union of Universities (ASUU) but also virtually all the staff unions in tertiary education were present in the protest. There was also an impressive representation from the trade union affiliates of the NLC. Also in attendance were the representatives of left and socialist coalitions such as Joint Action Front and the People’s Alternative Political Movement (TPAP-M).

However, while the closure of universities was the trigger, the real propeller of the protest was the mass anger against the failure of Buhari government and capitalist ruling elite over excruciatingly high cost of living and deepening insecurity. It was a radicalised mood prepared to fight for the reversal of the terrible situation if provided a platform and leadership.

This radical mood was reflected in the sales of over 100 copies of the Socialist Democracy (SD) – the DSM paper – just midway into the protest march in Lagos. Supplies of the ERC leaflet did not last that long. In many ways, the turnout at the Lagos protest surpassed expectations. As many have described it, it was a “sea of heads”. Although this amount to, possibly, nothing more than between 3,000 to 5,000 people but when compared to previous protests and particularly the suspicion of the pro-capitalist labour leadership by working-class elements, the youth, and activists, this is no doubt a significant turnout.

Reports trickling in since yesterday show that the character of the Lagos protest was repeated, to varying degrees, across the country. It was only in a few states that the turnout was less than a thousand. In fact, as we write, virtually all the capitalist media are reporting not just impressive turnout, but also militant and combative mood – unmistakable signs that the working class is ready for a showdown!

As argued in the leaflet of the Education Rights Campaign (ERC) circulated at the protest, the next stage should be a 48-hour general strike with mass protest. This is to further mount pressure on the Buhari government to meet the demands of ASUU and other staff unions and call for adequate funding of public education at all levels. Also on the agenda of the action should be resistance against worsening economic hardship including high prices of basic food, fuel and energy.

Unfortunately, only a few students were at the Lagos protest. Members of the ERC branch at the Lagos State University participated. Also, some officials of NANS Lagos JCC and a few individual students were there. The low number of student participation is due to weaknesses in the student movement and particularly the failure of the NANS and students union leaderships to prepare and mobilise. Also the NLC Lagos leadership made no spirited efforts to pull in the students’ movement. However, reports from other states show that this may not be a general pattern as students appeared to have participated in more significant numbers in some states compared to others.

Comrades of the DSM participated in four of the protest marches in Lagos, Oyo, Ogun and Osun states. Hundreds of copies of the SD were sold. In Lagos for instance, about 120 copies of the paper were sold. Thousands of copies of the ERC leaflet were also circulated. Contacts were made of individuals who are interested to join us or know more about the DSM. As we write, members of the DSM branch in Abuja are participating in the central protest rally taking place today, Wednesday 27 July 2022, in Abuja. More reports will be published following today’s action.