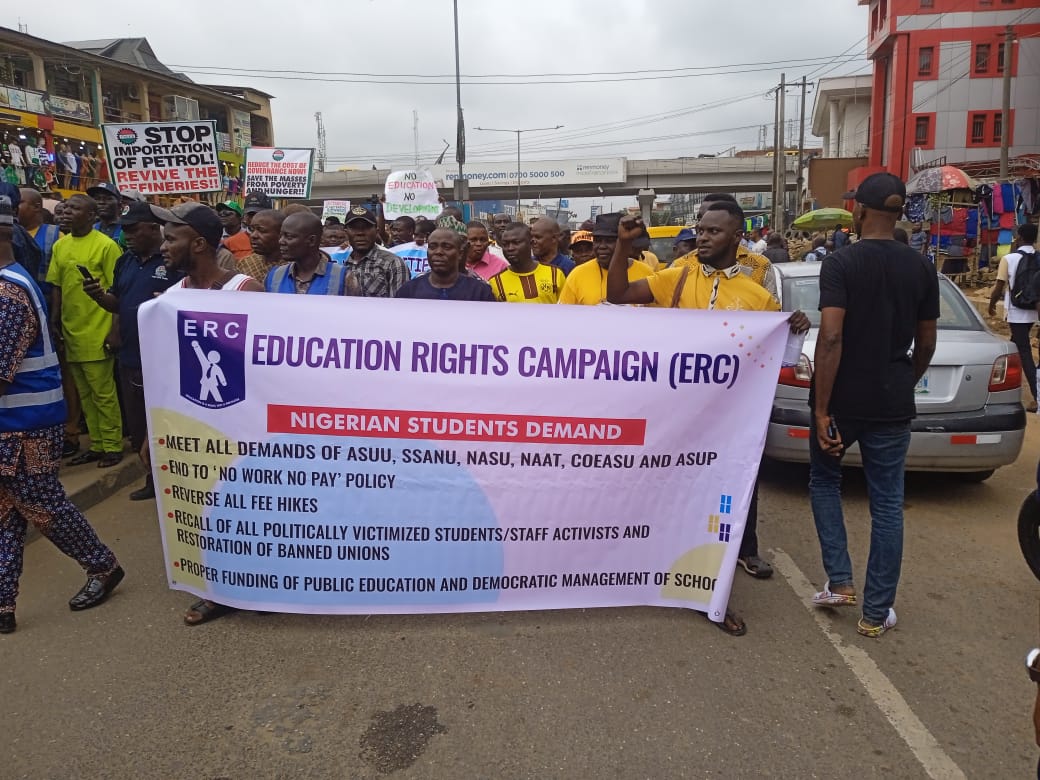 The Education Rights Campaign (ERC) welcomes the decision of the Nigeria Labour Congress (NLC) to embark on a two-day national protest on 26 and 27 July 2022 to force the government to meet the demands of ASUU, SSANU, NASU, COEASU, ASUP and NAAT. Although coming very late, it is a step in the right direction. We hereby urge the Trade Union Congress (TUC) to align with the position of the NLC and mobilize out its members to jointly prosecute the two-day national protest and subsequent actions. We also call on Nigerian students, students unions, radical students’ groups, NANS and civil society organizations to answer the call of the NLC by mobilizing en masse for the protest.

While we commend organized labour, we equally warn against late-minute suspension of the protest without any democratic discussion or any concrete resolution of the crisis. We make this point against the background of the constant suspension of strikes and mass action by NLC without any resolution of the crisis the action was intended to resolve. For instance, in January this year the NLC and TUC declared a protest over the planned removal of fuel subsidy only to call it off at the eleventh hour. A similar thing happened in 2020, when the NLC called off its planned strike scheduled to commence on September 28 that year.

NEXT STAGE SHOULD BE A 48-HOUR GENERAL STRIKE

Clearly, if this protests are successful, they can send a clear warning to the capitalist elite. However far more would be required to win victory. This is because the President Buhari APC government appears to recognize that conceding to the demands of public university unions may provoke a contagion of demands for wage review and sundry issues across the labour movement especially in the context of economic crisis, inflation and worsening living standards. Therefore we urge the NLC and TUC to begin to prepare for a 48 hour general strike as the next stage after the July 26 and 27 national protest.

Given the mounting attacks on the lives and livelihood of the mass majority of Nigerians such as rising cost of living, fuel price hike etc, such a general strike cannot just be called to demand reopening of public universities alone. Such a general strike has to be called to also demand the reversal of fuel price and electricity tariff, price control and actions against price-gouging, a new review of the minimum wage and pensions up to N100, 000 monthly, reduction in the wages and allowances of political office holders, a halt to taking of new loans, non-payment of existing public debt, end privatization of government enterprises, improved funding of public education and services and their democratic management etc.

In addition, the ERC holds that there is a need for a summit on the ASUU strike and the deteriorating state of public education. Such a summit should be constituted by pro-masses’ organisations, education workers unions, trade unions, students’ unions and professional bodies like the NBA. Such a conference must be used to deliberate on the way forward and map out line of actions beyond the planned protest by NLC.

The root cause of the crises the education sector is enmeshed in today is the deliberate but chronic UNDERFUNDING of the education sector together with the lack of democratic management of schools, something that accounts for the misappropriation of the limited allocations. This chronic underfunding is in spite of the fact that Nigeria has enough resources not only to fund public education adequately but to provide a free and functional public education at all levels. Unfortunately, this is not the case because of endemic corruption and capitalism.

At the same time, it is also true that the corrupt practices by administrators of tertiary institutions have aggravated the calamity facing public education. This is why in the Education Rights Campaign (ERC), we have consistently demanded, in addition to adequate funding of education, democratic management of institutions to accommodate the active participation of students and education workers through their elected representatives.

ASUU AND OTHER UNIONS ARE NOT COMPLICIT

The blame for the collapsing state of public education resulting in the current prolonged strike action must be placed at the doorstep of successive capitalist governments and their cronies in the administration of tertiary institutions. ASUU and other unions are not complicit in this unholy conspiracy of attacks on public education.

Despite that public universities have been shut down for over 5 months, there is nothing to suggest that the Buhari Government is concerned. We have seen just recently how government ministers saddled with the responsibility of settling the crisis were busy pursuing presidential ambition including making a payment of outrageous sum of N100 million for APC nomination forms. This is a clear sign that the capitalist ruling elite do not care. This is why this protest is important as well as a series of actions including a general strike to escalate over the coming days and weeks.

FOR A SOCIALIST CHANGE!

Public education is underfunded, not primarily because of lack of resources, but as a deliberate policy in line with the prevailing neo-liberal capitalist agenda. Therefore, the struggle to save public education from the claws of attacks and against all anti-poor capitalist policies should not be disconnected from the struggle to realize a better society. That better society is a Socialist Nigeria under which the commanding heights of the economy will be placed under public ownership and democratic control and management of the working people. This is the only way to ensure that Nigeria’s wealth and resources benefit the mass of the people instead of enriching a tiny capitalist class.

For us in the Education Rights Campaign (ERC), we support the call for the formation of a mass working people’s party on a socialist program that can build a mass revolutionary movement to wrest political power from the thieving capitalist elite. This is in order to use the huge human and material resources of the country for the benefits of all and begin a socialist transformation of society.

The Education Rights Campaign (ERC) is a platform established by the Democratic Socialist Movement (DSM) to organize students and education workers to campaign against underfunding and other anti-poor education policies like fee hike, commercialization and attacks on democratic rights. Therefore if you are concerned about the attacks on public education and wish to fight back or you are