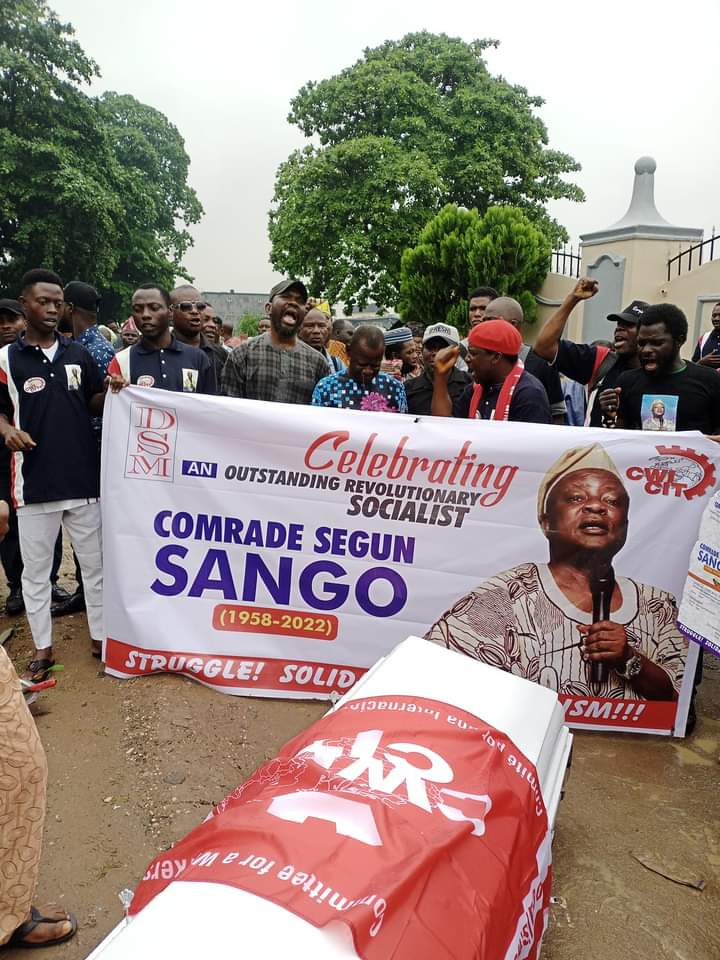 Every journey has a terminus.

Segun Sango, you have reached your earthly terminus. Now, it is time to bid you a final goodbye.

However, we also say this Adieu with joy in our soul.

We do too with songs of victory on our lips.

We mourn and cry because your passage has created a big vacuum in the struggle for the emancipation of Nigerian peoples from the shackles of imperialist and capitalist exploitation; and the revolutionary socialist transformation of Nigeria so that the peoples’ collectively produced wealth can be used for the benefit of the majority, and not that of a greedy and thieving few.

It was a struggle to which you gave and dedicated your entire life in the classical tradition of renowned revolutionaries such as Karl Marx, Leon Trotsky, Rosa Luxembourg, etc.

The remarkable chapters of that lifetime of struggle and uncommon dedication to the building of the forces of revolution have been recalled in gushes since your passage on May 23rd, 2022 at the age of 64, following a prolonged illness. We heard more earlier today at your lying-in-state. The tributes now run into volumes.

Joy because your work has inspired and will continue to inspire generations of student, youth and working-class activists and socialist fighters. Joy because the organisational and revolutionary monuments you inspired and built, particularly, the Democratic Socialist Movement (DSM) and the Socialist Party of Nigeria, remain recognisable forces, working and fighting along other genuine change seeking elements here in Nigeria and internationally, especially through the Committee for a Workers’ International (CWI), to fulfill your dreams for the emancipation of humankind.

Joy, because the journey was rough and tough; and sometimes, occasioned untold suffering and deprivation; yet you remained contented, selfless and lived according to your convictions without regret, without envy and without begrudging those who chose different paths including some of your erstwhile comrades.

In a reverse sense, we can boast that not all comrades are turn-coats. And if we are challenged to name an example, we would confidently point at you, Sango, and dare any one to dispute the fact because yours was a striking example. A significant example that offers hope that there is future for humanity in Nigeria, because as you yourself said countless times, the country is too blessed with the best in everything for the people continue to wallow in abject poverty and confined to a life of backwardness despite advances in sciences and technologies to which same Nigerians have enormously contributed.

The victory song comes from the kind of hope that you Sango – and others like you – offered with your exemplary life, even though as a mortal, you definitely had your shortcomings.

Like Frederick Engels said of Karl Marx at his grave side on March 17, 1883, we are confident that your name and work will endure through the ages.

Therefore, to you Segun, son of Aderemi Toriola and Deborah Mojoyin of the warrior Modakeke nationality; to you Segun Sango, the SS of the socialist, working class and revolutionary movement of Nigeria; to you Segun, the husband of comrade Tinu and the father of Tola, Tunde and Subomi; to you Segun Sango, ‘the Law’ to all and sundry at Fela and Femi’s Afrikan Shrine and to you SS, a best friend, confidant, trusted ally and wonderful family friend, we say this adieu singing:

There is Victory for Us

In the Struggle for our Freedom

There is Victory for Us