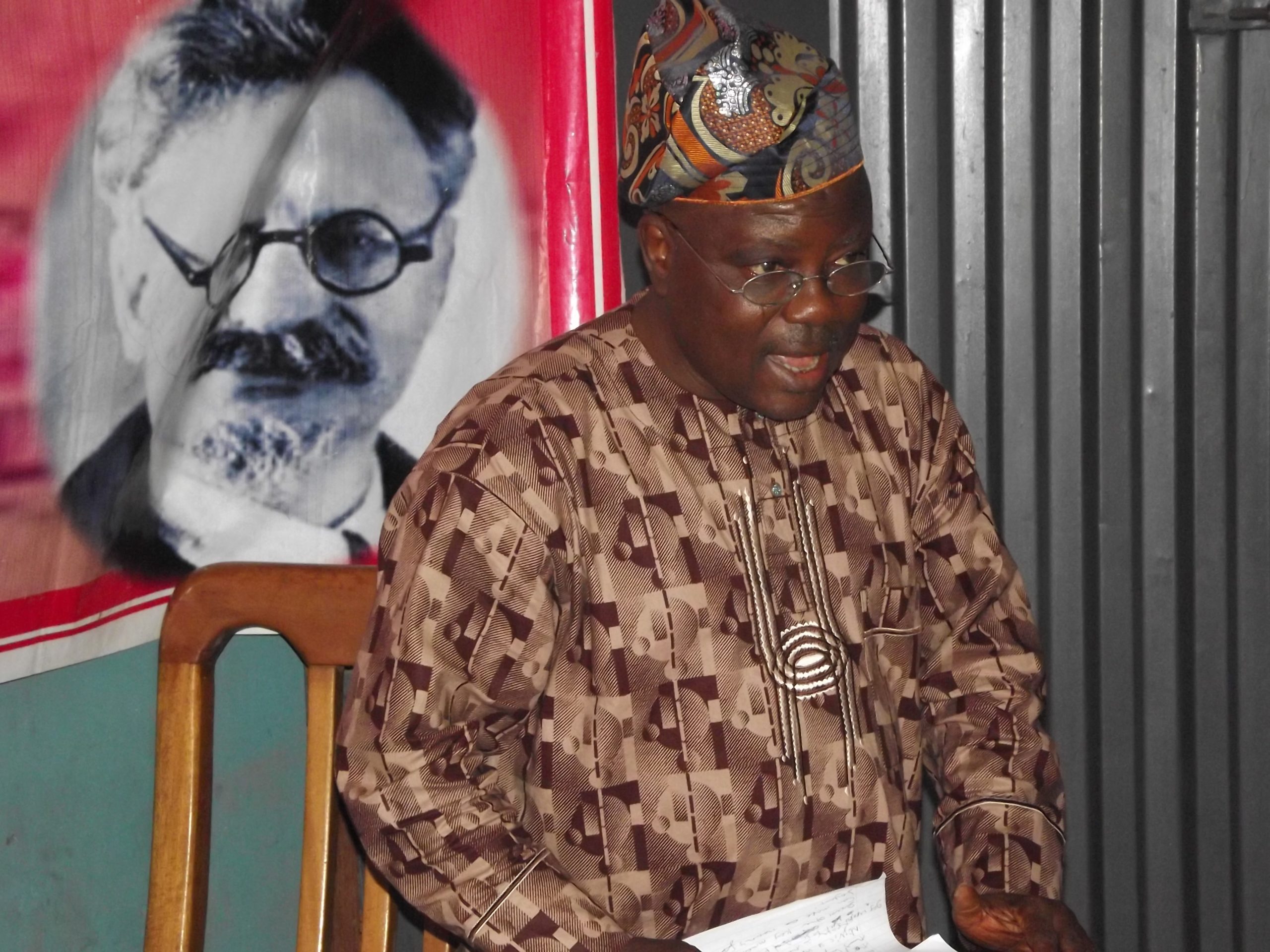 Following a prolonged illness, comrade Segun Sango died on the evening of Monday 23rd May 2022 at the age of 64, leaving behind a wife, children, and unfortunately an aged mother, among other family members. Born Segun Aderemi, SS as he is also fondly called was until his death the General Secretary of the Democratic Socialist Movement (DSM) and the National Chairperson of the Socialist Party of Nigeria (SPN).

His death is no doubt a huge loss to the workers’ movement and the left tendency in Nigeria, Africa, and the world. Brilliant, oratorical, and selfless, there are very few revolutionary leaders like Segun Sango in the annals of the left movement in Nigeria. This explains the outpour of tribute on social and traditional media since the news of his passing was broadcast.

He was an inimitable Marxist revolutionary, unrepentant socialist, and selfless working-class fighter who until he breathed his last never abandoned his conviction that the only solution to the multi-faceted problems plaguing Nigeria, Africa, and the World is the abolishment of capitalism and enthronement of Socialism. He firmly believed that given the immense wealth and resources that Nigeria is endowed with, there is no justifiable reason for the mass poverty, illiteracy, mass unemployment, and destitution which are the main features of life here. He also firmly believed that Nigeria’s working class, if given a bold leadership and fighting programme, was capable of leading the rest of the oppressed masses to fight against exploitation and above all to carry out a Socialist revolution.

For the actualization of these convictions, Segun Sango and his comrades right from the mid-80s started and selflessly built the Labour Militant (LM) which eventually became known as the Democratic Socialist Movement (DSM), the Nigerian section of the Committee for a Workers’ International (CWI), as a Marxist and  Trotskyist revolutionary tendency in Nigeria for the past four decades.

A brilliant Marxist theoretician and polemicist, there are few people who could explain the absurdity of capitalism in a way that captivates an audience than Segun Sango. Yet, he was also a man of action. Right from his days as a student activist at the University of Ife (UNIFE) now Obafemi Awolowo University (OAU), he had always been at the fore of struggles. He played an important role in the national students’ boycott of classes to protest against the attempted increase in tuition fees in the Universities in 1984 alongside his lifelong friend and comrade, Lanre Arogundade who was then president of the National Association of Nigerian Students (NANS).

During the period of military rule, Segun Sango was incarcerated for his opposition to military rule and role in the anti-military struggles. At the dawn of civil rule, he alongside the comrades of the DSM played important roles in strikes and protests of the labour movement against fuel price hikes and anti-poor policies. For this reason, Segun Sango served as a national mobilization officer of the Joint Action Front (JAF) and a committee member of the Labour and Civil Society Coalition (LASCO). His public speeches, interviews, and writings during this period constantly urged the labour movement to adopt a bold and consistent method to lead the struggles of the working masses to victory while at the same time arguing the need for a mass workers’ party with a socialist program to fight for political power.

When the late fiery lawyer and social crusader, Gani Fawehinmi formed the National Conscience Party (NCP), Segun Sango and his comrades in the Democratic Socialist Movement (DSM) were some of the first to recognize the significance of this development and the need for Marxists to play a role. As a result, Segun Sango served as the Lagos State Chairman of the National Conscience Party (NCP), and under his leadership, the NCP in Lagos became the largest and most active chapter of the party nationally. He also led the NCP in Lagos to a brilliant electoral intervention in 2003 when NCP candidates including DSM leading member, Lanre Arogundade, came third in all elections in the state despite massive rigging by the then ruling Alliance for Democracy (AD). Subsequently after this, Segun Sango, DSM comrades, and allies were forced out of the NCP following a right-wing shift in its leadership.

Faced with the failure of the Labour Party to develop as a genuine workers’ party, Segun Sango led the DSM, with others, to found in 2013 the Socialist Party of Nigeria (SPN) which was eventually registered by the Independent National Electoral Commission (INEC) in 2018 following a prolonged legal and political campaign. The SPN stood candidates and made political gains in the 2019 general elections. Unfortunately, the SPN has now been deregistered by the INEC thereby robbing change-seeking working masses and youth of a platform.

Significantly, Segun Sango’s passing has come at a period when Nigeria itself is at a precarious crossroads, with the descent into barbarism he had repeatedly warned against in the absence of a socialist transformation manifesting in different forms including mind-boggling corruption, terrorist attacks, ritual killings, to mention some. These and other absurdities have become aggravated because economically and politically, Nigeria’s crisis has been worsened by the corrupt capitalist elite who just seven years ago came in with a lot of promises.

At the time President Buhari was campaigning in 2014, Segun Sango was not yet bedridden and still able to follow political developments. In response to the national illusion then developing around Buhari, he had dismissed the possibility that Buhari could be a messiah of the working people. According to him, no member of the capitalist elite no matter how well-intentioned can be trusted to turn Nigeria around for good and in the interest of the working masses and poor. This is because the solution to Nigeria’s problems requires a sharp break with capitalism and imperialism. Hence, he firmly believed that the Nigerian working masses have to rely on themselves and build a political alternative to take political power. Seven years after, the spectacular failure of the ruling Buhari/Osinbajo APC government fully confirms Segun Sango’s profound prognosis.

Also, Sango was an internationalist, following the struggles of workers and the oppressed around the world as part of the struggle to end the rule of capitalism and imperialism and for a socialist world. A member of the leadership of the Committee for a Workers’ International (CWI), Sango worked to help build the workers and socialist movement internationally, something that included speaking tours in Europe and the US.

As the working masses mourn his passing, the Democratic Socialist Movement (DSM) calls on left-wing elements and the labour and youth movement especially the leadership of the Nigeria Labour Congress (NLC) and the Trade Union Congress (TUC) to fulfill Sango’s long-term desire and struggle for the building of an independent and genuine mass workers party that could build a mass revolutionary movement to abolish capitalism and enthrone a Socialist Nigeria, something that is vitally needed at this time of deepening crisis in Nigeria.