The Nigeria Labour Congress (NLC) Ogun state on Wednesday, October 27, organised a protest over the deplorable condition of the Lagos-Abeokuta Expressway in Sango-Ota. The NLC Lagos was also there in solidarity. Seven comrades of the Democratic Socialist Movement (DSM) and Campaign for Democratic and Workers Right (CDWR) participated in the protest. 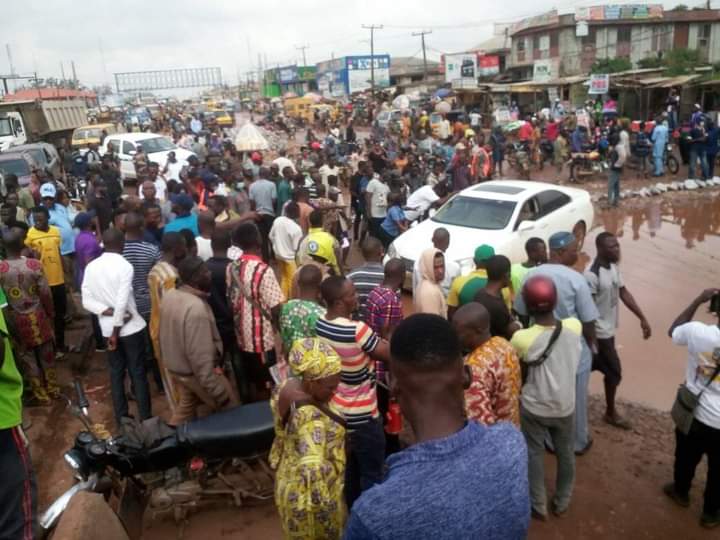 The highlight of the protest was the enthusiastic support of residents, motorists, traders and Okada riders in the area who escalated the action beyond the original plan of the labour leadership who only wanted a symbolic action under the Sango-Ota bridge.

Therefore, contrary to the plan of the NLC leadership, the protest turned into a full scale barricade of both sides of the highway leading to a long stretch of traffic on both sides. The Okada riders joined en masse and on their own began carrying the pile of stones the government had quickly dumped on the road with a view to do a hurried palliative work, and started using this to build a stone barricade across both sides of the road. While doing all these they were peaceful, organised and full of praises for labour.

But as this was going on, the labour leadership, apparently came under pressure from the state and police, decided to call off the action around past 10am. They ordered everyone back to Under Bridge without even bothering to consult with the mass of residents and Okada riders who joined the action.

We had proposed a mass meeting on the highway to discuss and agree on when to suspend the action thereby ensuring that the mass was carried along. This action of the NLC Ogun state no doubt angered the mass and immediately the crowd started accusing them of betrayal.

While the NLC and workers contingent moved back to under the bridge, the Okada riders and residents stayed manning the barricade but this did not last. They were soon attacked by the police who dismantled the barricade.

The protest was rounded off under the bridge. The protest afforded us further opportunities to reach out to the mass with our ideas.

We circulated and exhausted 1,000 copies of a CDWR leaflet and sold 7 copies of the Socialist Democracy. We also met 3 people who were interested in learning more about the DSM.