BIDEN’S PRESIDENCY: “NOTHING WILL CHANGE FUNDAMENTALLY IN THE LONG RUN”

BIDEN’S PRESIDENCY: “NOTHING WILL CHANGE FUNDAMENTALLY IN THE LONG RUN” 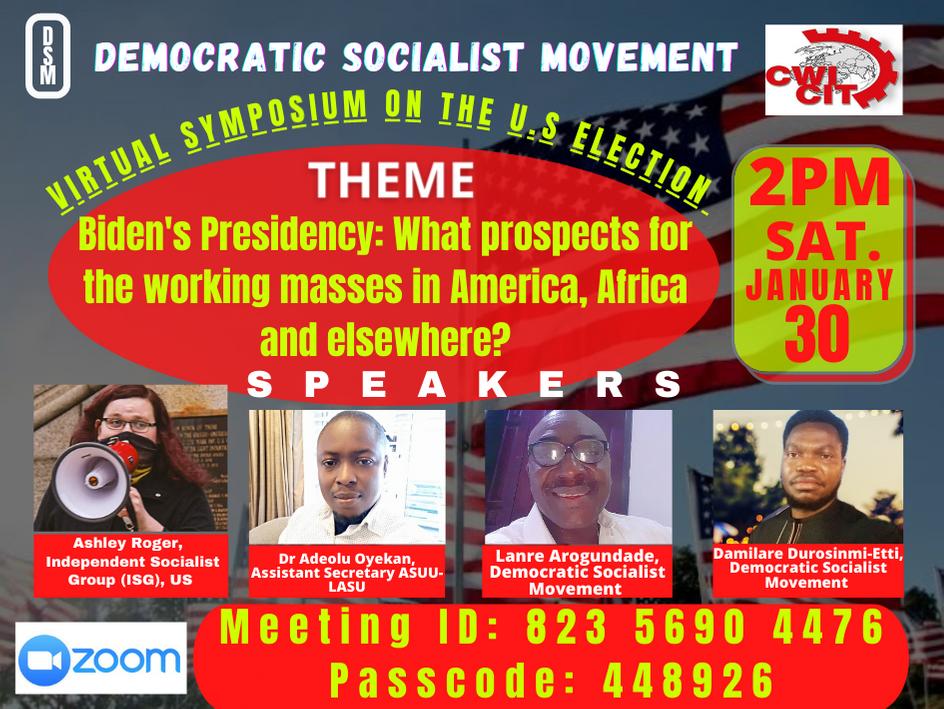 On Saturday 30 January 2021, the Democratic Socialist Movement (DSM) held a virtual symposium with the theme: ‘Biden Presidency: What prospects for the working masses in America, Africa and elsewhere?’ Lined up to speak at the event were: Ashley Rogers from the Independent Socialist Group (ISG) – supporters of the Committee for a Workers’ International (CWI) in the US, Adeolu Oyekan – Assistant Secretary, Academic Staff Union of Universities (ASUU, Lagos State University), Lanre Arogundade and Damilare Durosinmi-Etti (Both leading members of the DSM).

About 35 connections on zoom were made. People attended the virtual symposium mainly from Nigeria but there were also a few participants from sister parties of the DSM in South Africa, Malaysia and Britain. Pelad moderated the discussion while the lead off was given by Ashley. The general consensus at the end of the discussion which lasted for about 2 hours and 30 minutes was that though the defeat of Trump represented a significant development and save for some mild reforms, the Biden presidency will not bring any fundamental change to the working masses.

Below are a few highlights from the discussion:

Ashley Rogers: “It will appear more than illusion if we think Trump’s administration was the fundamental problem of America. The Biden Presidency won’t do any better because in the final analysis the Democrats and Republicans are both agents of capitalism”.

While rounding off his speech, Ashley also charged the working masses in Africa particularly in Nigeria to prepare to struggle for Socialism. This requires the working class taking control of Nigeria’s wealth because “the wealth of 5 richest men in Nigeria is enough to take millions of Nigerians out of poverty”.

Adeolu Oyekan; “Appointees under the new administration of Biden have one time been in Obama administration so there won’t be concrete changes that will be in the interest of the masses of the working class. Africa is most likely not to benefit from Biden administration because both Republican and Democrats are “same of same”. The only way to deal with global capitalist system is raise the consciousness of working masses”.

Etti: “American challenges go far beyond voting Trump’s out. Biden also represents the interest of capitalism so nothing will fundamentally change in the long run. The only solution is building a working class party (socialist party) that’s based on Marxist principle that will give the working class the freedom.

Luke: “Biden policy could even be worse compared to the Trump administration because Trump is obviously a capitalist but Biden who’s also a capitalist is pretending to be for the masses while waiting for the right time to come out with some policies that will, of course, not be in the interest of the masses”.

Weizmann (Marxist Workers Party, (CWI South Africa): “Americans should not have the illusion that Biden administration is going to be in the interest of the masses in America. There is a need to organise the working class not only in U.S but all over the world to challenge capitalism and capitalist anti-poor policies that is making life miserable for the masses.

Robert Bechert – International Secretariat of the Committee for a Workers’ international (CWI): “There are some parallels between the US and Nigeria. The popular hopes after Buhari’s 2015 victory have turned into bitter disappointment, and now in the US the question is what will happen with Biden. Obama lost congressional elections two years into his presidency. Biden will try to make reforms, but they will be limited and it is possible that Trump led Republicans could regain control of congress in 2022. Like in Nigeria this will pose sharply the question of rebuilding the trade unions alongside forming a Labor party with socialist policies, independent of the pro-capitalist Democrats and Republicans”.

Soweto: “The US election had an impact in Nigeria as many were elated by Trump’s defeat. This alongside the rise of Bobi Wine in the Uganda election serves as inspiration to the working masses and youth in Nigeria to look for a way to take the mantle of power from the capitalist APC and PDP. But the major lesson that needs to be learnt is that a mass workers’ party need to be built for this to happen. On foreign policy, Biden’s administration may try to claw back some influence the US has lost in Africa. This could mean competition between China and U.S would continue with the continent becoming a stage for imperialist rivalry.

After the contributions, Lanre Arogundade summed up discussions. According to him, why Nigeria follows America election especially the last that produced Biden is because: (1) Trump’s anti-Nigeria policies, and (2) relationship between Nigeria and America, especially as large numbers of Nigerians live and work in the U.S.

While commending the comrades that contributed in the discussion, he also reiterated what other comrades had buttressed and let us know that our liberation is in our hands. The failure of PDP’s 16 years of ruling and now the almost 6 years of APC administration which is full of misery, banditry and hunger is an indication there is need for the working people to build a genuine alternative political platform that will find the lasting solution to social and economic crises. The US election shows that an anti-poor regime can actually be defeated. He stressed that the discussion like this should not end here, there is need for more of it within the layers of students, activists, working class and the oppressed as part of building a socialist alternative.

The symposium was brought to a close with solidarity songs led by Abbey Trotsky.