Onyeka Ifemenam, a Nigeria Union of Petroleum and Natural Gas Workers (NUPENG) official (Capital Oil VIO) linked to Senator Patrick Ifeanyi Ubah, led other armed thugs to disrupt the meeting and attacked workers leading to serious injuries. We are linking this attack to Senator Patrick Ifeanyi Ubah because Onyeka Ifemenam had earlier had a discussion with one of the workers (Mr Akujobi Ozoemena Barnaby) on November 5, 2020, and said he was instructed by Senator Patrick Ifeanyi Ubah to warn the workers to end the agitations against him or they will be attacked. Mr Akujobi Ozoemena Barnaby had written a petition to the Lagos Zone 2, Police to complain about the threat. Onyeka Ifemenam actually led other armed thugs linked to Nigeria Union of Petroleum and Natural Gas Workers (NUPENG) and members of the Oodua Peoples Congress (OPC), Capital Zone, to carry out this heinous attack.

Two officials of the Campaign for Democratic and Workers’ Rights (CDWR), Comrade Chinedu Bosah and Comrade Rufus Olusesan were part of the meeting and were also attacked. Mr Uzoma Njoku and other workers who were brutally attacked by these armed thugs sustained different degrees of injuries and are currently being undergoing treatment at the hospital. These rented thugs stole phones belonging to some workers and seized their documents. 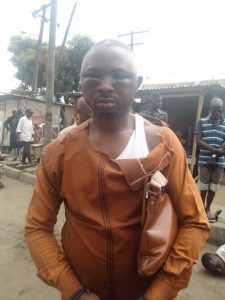 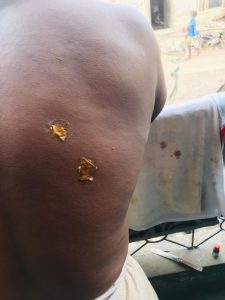 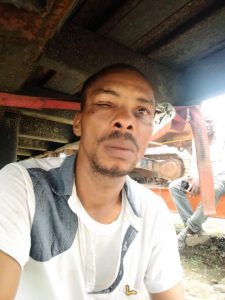 Three of the workers injured in the November 7 attack

Workers rushed Festac Police Station to lodge complaint during the attack but police declined to intervene. It took the intervention of some military men attached to OP MESA to rescue the workers who were kidnapped and were beaten for over one hour by these thugs.

Senator Patrick Ifeanyi Ubah and the management stopped paying salaries in 2016 and before then, salaries were paid in a staggered manner leaving a backlog at every point in time. He also does not pay by payslip, he transfers money into workers’ bank accounts without itemizing the breakdown of the salary/allowance components and this method allowed the shortchanging of workers. Hence, Senator Ifeanyi Ubah and Capital Oil and Gas Industries Ltd is owing workers 4 years’ salaries, as the workers have not been sacked and had been reporting to work until recently when they got tired of coming to work. Senator Ifeanyi Ubah has refused to document workers’ employment contract and refused to issue employment letters to most of the workers in violation of Section 7 of the Labour Act and stopped workers from joining the union.

Senator Patrick Ifeanyi Ubah has undermined workers’ right to pension having not enlisted workers to the pension scheme in violation of Section 2 (2) of the Pension Reform Act 2014. Hence, workers are owed over 10 years’ pension.

The workers had approached Senator Ifeanyi Ubah officially to enter into a negotiation but he did not respond but only offered workers six months’ salaries under a militarised environment in meetings with workers. The only concrete response from Senator Ifeanyi is the current attack on workers by thugs linked to him, instigating violence. It is unfortunate that a sitting Senator (Ifeanyi Ubah) and a businessman would be linked to violence, crude exploitation, indecent work practices and attack on the rights of workers. The lives and security of workers are currently under serious threat as a result of their agitation for their entitlements.

Campaign for Democratic and Workers’ Rights (CDWR) is demanding that Senator Ifeanyi Ubah should pay workers their 4 years’ salaries and over 10 years pension. The CDWR calls on the Nigeria Police to investigate the attack on workers by thugs and bring Onyeka Ifemenam and others linked to attacks, including Senator Ifeanyi Ubah, to justice if found wanting. We call on NUPENG and OPC leadership to call their members stationed at Capital Truck Park to order.

The workers are undaunted and will continue the struggle despite the threat and attack by sponsored thugs and other forms of intimidation. Comrades of the CDWR will continue to work with the workers in solidarity.