Meeting was dispersed without a definite time to reconvene

CDWR meeting with Oyo State House Committee on Employment, Labour, Productivity and Pension was dispersed without a definite time to reconvene

The conduct of Hon. Mustapha Hakeem Olawale during the preceding suggests a bias and compromise

Journalists were barred from covering the proceeding! 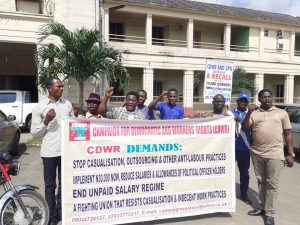