A Call for Solidarity 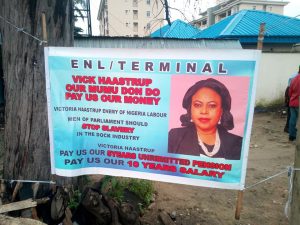 After almost three years of deadlock in court, the matter of 584 dockworkers unjustly retrenched by ENL Consortium came up for a hearing on Thursday June 20, 2019 at the National Industrial Court. The workers in their hundreds were already in the court premises around 7:45am to display their banners and chant solidarity songs. But their matter did not come up until 3:45pm.

The National Industrial Court is the court of the first instance on labour matters. However, the cumbersome and expensive nature of the justice system makes it very difficult for an average worker to approach the court for justice. Even when workers manage to approach the court as in this matter it is usually a case of “justice delayed” and perhaps justice denied”.

The dockworkers took the ENL consortium to court to challenge their unjust sack and to seek an order for payment of about 10-year time related wage (salaries) owed them by the company. The Maritime Workers Union of Nigeria (MWUN) collaborated with the ENL management to deny the dockworkers their right to the industry minimum wage (time related wage) and that explains why the union took side with the management against the members (dockworkers). Despite the treachery of the union leaders, the dockworkers have sustained the campaign and the struggle with the backing of the Democratic Socialist Movement (DSM) and the Campaign for Democratic and Workers’ Rights (CDWR).

The workers are organised under the banner of Agitating Dock Workers Forum initiated when the struggle started 2016, few months after they were thrown out from the company without settlement of their 10 years of time wage which is a minimum wage of N33, 000 with 10% bi-annual increment. While working for the company they were only paid for what is called in the maritime industry tonnage in violation of the industry collective agreement reached in May 2008.

The matter has been adjourned till to Wednesday July 17, 2019 for continuation of the hearing. This was after the cross examination of Ezeagu Gerard Lucky the leader of the workers by the lawyers to the two parties Amie Ogeh (for ENL) and Toluwani Adebiyi (for dock workers). We hope the court will seat on the day. In any case, hundreds of the workers will be in court with placards and banners highlighting their plights and demands.

The CDWR – the pro-labour platform of DSM – has continued to show solidarity to the workers for the past three years.

We call on socialists, trade unionists and activists locally and internationally to give solidarity to these cheated but resolute dockworkers. This could be in form of solidarity messages or solidarity photos especially on the day they are in court. This will help sustain their morale and determination to fight for justice.

The solidarity message or solidarity photos can be sent to dsmcentre@yahoo.com.