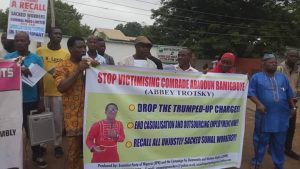 On Thursday July 11 Comrade Abiodun Bamigboye, aka Abbey Trotsky, was at Iyaganku magistrate court, Ibadan, Oyo state. This was in connection with the trumped-up charges levelled against him by the police authority in Oyo state and zone II (two) in connivance with the management of SUMAL FOODS LIMITED and the leadership of the NUFBTE, the in-house union within the company.

Members of CDWR, SPN and a team of lawyers led by Adeyinka Olumide-Fusika (SAN) who stood for Abbey Trotsky got to the court as early as 8am.

This was before we were told that the magistrate was indisposed and that the court could not sit. The case was later adjourned till August 5 following an agreement among lawyers and state prosecutor.

Comrades and other activists then moved outside the court premises to stage a protest where the press was also addressed. Some of the journalists came from Lagos to cover the matter. We circulated the leaflet issued by CDWR and held banner as well as placards.

In the materials, as well as the address to the press, we call for immediate dropping of the trumped up charges against Abbey Trotsky, recall of all unjustly sacked workers of Sumal, an end to slave conditions of work at Sumal and respect to democratic rights of workers. We call for fighting trade unions to defend the rights and interests of workers and the working masses in general. 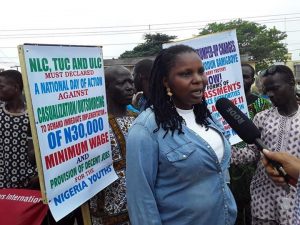 We also call on the national leadership of the trade unions to initiate a serious campaign against the scourge of casualisation and outsourcing and to declare a national day of action on the issues as well as on the continued delay in the implementation of the new N30,000 minimum wage signed into law last April.

A procession was held later from the court premises through Dugbe/Cocoa House and which terminated at the event centre of National Union of Local Government Employees (NULGE) where the activities were reviewed.

Our appreciation goes to members of CDWR and SPN as well representatives if including trade union like ASUU and organisations like CWA, CDHR, OPC, who joined us in court in solidarity.

We also thank comrades of the Committee for a Workers’ International (CWI) internationally for their various solidarity actions including protest messages and protests to Nigerian Embassies in support of this struggle.

It would be recalled that Abbey was first arraigned at the Magistrate Court on June 7 after various arrests and detentions by the police and the DSS both in Ibadan and Osogbo. He is being harassed by the police and DSS because of the solidarity actions of the CDWR for the struggle of casual workers at Sumal Foods against the slave conditions to which they have been subjected by the management.