The 22nd Congress of the Democratic Socialist Movement (DSM) has come and gone but its import in terms of the mapping out of a programme for the development of the class struggle in Nigeria will continue to reverberate.

The congress was held from Saturday 14 to Sunday April 2018. It was preceded by a day-long meeting of two commissions, on students’ work and women’s work, on Friday 13 April 2018. 24 comrades were at these meetings. The students’ commission discussed the developing struggles in the students’ movement and how to intervene. At the end, there was a resolution to strengthen the struggle in the students’ movement by launching a national campaign involving poster pasting, leafleting, symposium, mass meetings and protests. The recent sex-for-marks scandal at the Obafemi Awolowo University (OAU) formed part of the background to the discussion at the women’s commission. At the end, that meeting equally agreed to launch a campaign platform to be called “Resistance against Oppression of women, Sexual harassment and Anti-poor policies” (ROSA).

About 70 delegates and observers, as well as contacts, attended over the two days for which the congress lasted. On the first day, a discussion on the perspective for the class struggle in Nigeria and the 2019 general elections (Nigeria perspective) led by comrade Soweto took place. This was followed by discussion on world relations led by Robert Bechert from the International Secretariat of the Committee for a Workers’ International (CWI). 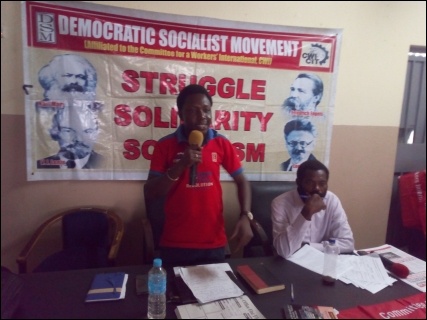 In these two discussions, the economic and political crises of capitalism were thoroughly discussed. In Nigeria as well as globally, decades of capitalist anti-poor policies and economic crises have boosted disappointment in the political establishment which in turn has led to search for new alternatives. The growth in support for right-wing populist, “left” and even “socialist” alternatives in a few countries across the world can be repeated in Nigeria. This prospect also exists in the build up to Nigeria’s 2019 general elections with many seeking for a new political alternative to the ruling APC and discredited PDP. However, especially if the current leadership of the working class continues failing to build a mass workers’ political alternative, there is equally the danger of a rise in ethno-religious crises and the prospect of right-wing populist forces exploiting the vacuum. This is one of the reasons the DSM is presently building the Socialist Party of Nigeria (SPN), which was recently registered by INEC after three and a half years of legal and political battle, side by side with our longstanding campaign for a mass working peoples’ party on socialist programme.

On the last day, the morning discussions centred mainly on reports and how to build the DSM and its campaign platforms more effectively in the workplace, communities and campuses. Particularly inspiring were reports from worker and student comrades on the struggles and campaigns they have been involved in. The afternoon session was mainly on how to build the SPN and utilise it before, during and after the 2019 general elections. 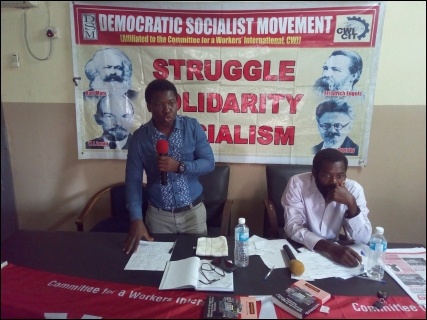 Finally, elections into the bodies of the DSM were conducted after which congress proceedings were officially brought to an end. On both days fighting fund collections for the work of the organization, including on the SPN, was launched. This was by far one of the most tasking national meetings of the DSM in recent times. Discussions on the last day lasted into the night yet the attendance was still great. The enthusiasm and energy displayed by comrades all indicate the enormous confidence that now exist especially because of the SPN and the prospect that we will not be mere spectators in coming elections but we can now have more impact on the situation.

A more compressive report of the Congress together with its resolutions will be published later.