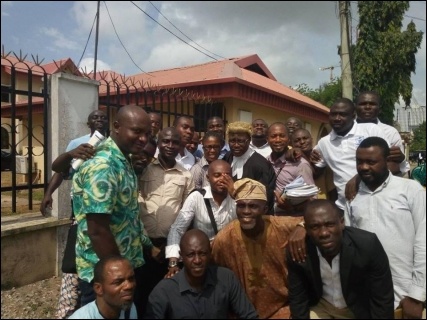 The truck officers who have been callously and fraudulently sacked by the management of Dangote Cement won, on Tuesday March 20, their the first victory against the company at the National Industrial Court. Following the frivolous and senseless preliminary objection raised by Dangote Cement Plc that lasted many hearings, Justice Mustapha Tijini ruled in favour of the cheated workers and fixed May 23, 2018 for the commencement of hearing on the substantial matter.

The reality of the matter is that Dangote Cement Plc has no case but, as usual, is trying to cheat workers. Unfair labour practices and favourable government policies is the reason Aliko Dangote is the richest man in Africa.

It should be recalled that Dangote Group publicized widely in the media in 2015 that it wants to empower about 28,000 Nigerians under a scheme known as OWN YOUR VEHICLE/TRUCK SCHEME.

About 800 workers were employed under the scheme and 400 each were deployed to Ibese in Ogun State and Obajana in Kogi State. The process of employment started in April 2015 and ended in May 2016 when most of the workers started work, while the second batch resumed in September 2016.

The agreement was to pay a N60,000 monthly salary, a performance bonus of up to the sum of N90,000 per month and medical allowance of 30% of annual salary. The truck officers worked hard to resuscitate 500 non-operational trucks, made them productive again and improved the distribution of Dangote Cement to different parts of the country. Workers were supposed to manage one truck each but were forced to manage 6, and some 7 trucks, without corresponding increment in salary, allowances etc.

Only the N60,000 salary was paid; the performance bonus was paid once and not in full; while the medical allowance was never paid. Shockingly, the workers were sacked in a humiliating manner on February 4, 2017 without any compensation. Workers with Ibese Plant were forced to resign on February 4, 2017 at gunpoint wherein gun wielding and battle ready policemen and soldiers supervised and participated in this ignoble act while workers at Obajana Cement Plant were threatened and eventually sacked on February 5, 2017. 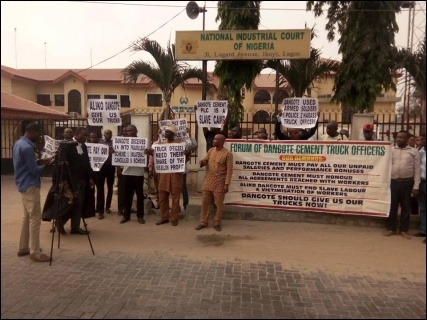 Workers had to protest publicly this unfair treatment of the Dangote Cement Plc management severally with the active solidarity of comrades of the Campaign for Democratic and Workers Rights (CDWR), as well as the Democratic Socialist Movement (DSM). The workers had no choice than to challenge the matter at the National Industrial Court (NIC), Lagos Division by filing the case in May 2017. A human right activist and a lawyer, Barrister Toluwani Adebiyi, is leading the legal battle on behalf of the cheated workers.

Many of the workers are currently suffering as a result of the unfair sack; many abandoned their jobs and businesses because of the promise of owing a truck; many cannot meet their needs, but within these period December 2015-December 2016) the Truck Officers alongside other workers in Dangote Cement Plc made N368 billion profit. The affected workers are demanding that the trucks managed should be handed over to them as agreed, perform ance bonuses and medical allowance for the number of months worked should be paid.

We are appealing to the general public including the trade unions, pro-labour organisations, and activists to join the workers in demanding for immediate justice. CDWR is also calling on the management of Dangote Cement Plc to begin immediate negotiation with the workers with the aim of resolving this matter or alternatively meet workers demand without further delay.