TIME UP FOR THE LOOTERS’ PARTIES

Â· A Clarion call for support for SPN to Fix Nigeria

SPN statement on receiving its registration certificate from INEC 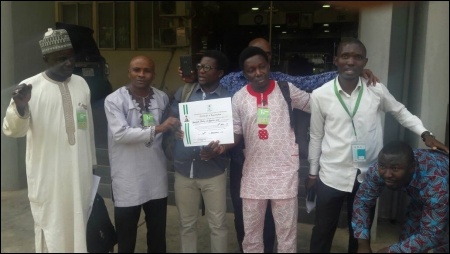 The Socialist Party of Nigeria (SPN) cherishes this historic occasion of the collection of our certificate of registration from the Independent National Electoral Commission (INEC) in compliance with an order of the Federal High Court Abuja.

As you are by now well aware, today’s epochal event is the culmination of a legal and political battle that lasted three and half years. It started on September 10, 2014 when SPN filed a case against INEC at the Federal High Court Abuja Division and came to a glorious end on 28 November 2017 when Justice Gabriel Kolawole in a courageous judgment ordered INEC to register our party within 30 days having contravened section 78 (2) of the 2010 Electoral Act (As Amended). 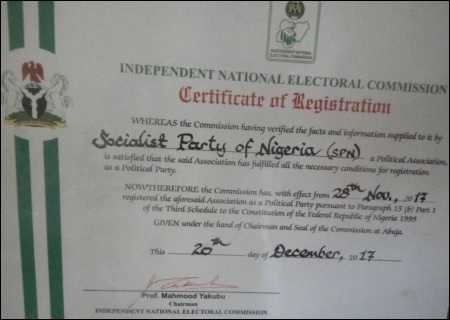 We are grateful to Nigerians and all lovers of justice the world over who stood by us during this struggle.

While the court case might have been laid to rest, the issues over which our party mounted a three and half year legal and political battle are far from over. These issues pertain to the onerous and expensive requirements for registration of political parties. Eighteen years after return to civil rule, it is a shame that our electoral system remains this undemocratic. Thanks to these onerous requirements, elections have therefore become nothing more than regular ritual to allow the poor choose among the class of exploiters who would oppress and exploit them for another four years. However the cumbersome and expensive nature of the electoral system is not accidental. The agenda is to bar workers and the poor from having a political voice. But SPN believes that politics should not be for the rich and corrupt politicians alone. The poor should also have a political voice. Hence, the SPN will continue, in alliance with the labour movement and civil society organizations, to campaign for the full democratization of the electoral process. 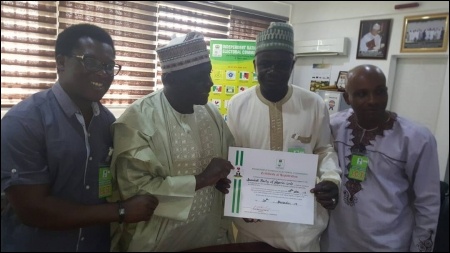 This said, today marks the beginning of a new chapter in the history of Nigeria. In fact the registration of the SPN could not have been timelier. It is coming at a period when Nigerians are yearning to be rescued from the clutches of the Buhari/Osinbajo All Progressive Congress (APC) capitalist government which has succeeded over the last three years in subjecting Nigerians to harrowing hardship, pain, tears and sorrow. Whether economically or politically, whether in terms of insecurity across the country or anti-corruption war, whether in the areas of service provision and infrastructure development, the Buhari/Osinbajo APC government has failed spectacularly just like the past PDP governments. It is equally obvious that Nigerian masses do not want a return to the previous PDP era.

More Nigerians are poorer today than ever before. Much more Nigerians, especially young people, are unemployed. We need an emergency programme for job creation tied to a socialist economic plan that will ensure that huge numbers of graduates and non-graduates are employed as soon as they leave school. Without this, Nigeria faces imminent social implosion.

Public education is fast collapsing yet the government is planning to budget less than 8% to the sector in 2018. Teachers, academic and non-academic staff are poorly paid yet government expects them to give their best not minding their empty stomach. We are in full solidarity with the strike of Kaduna teachers against mass sack. The education sector cannot be reformed by sacking teachers. By doing this the Kaduna State government is only compounding an already bad situation. We need improved funding of schools, better teaching and learning facilities and a program for the training and re-training of teachers. This should the priority of a responsible government. We also call on the government to immediately meet the demands of SSANU, NASU and NAAT who are currently on strike across the country

The public health sector is in terrible shape. As a result many Nigerians are dying daily from treatable ailments.

5 years after privatization of the power sector, Nigeria remains in darkness.

To make matters worse, this government cannot even guarantee availability of fuel products at affordable prices and yet it calls itself a government of change! 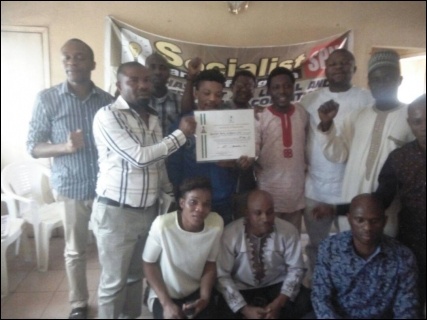 Today Nigeria is like a big cemetery given the daily news of killings going on in different part of the country. Is it the Boko Haram insurgency that has not been fully quelled you want to talk about or the herdsmen/farmers conflict? We condole with the people of Benue, Taraba and other states where the ongoing herdsmen/farmers conflicts are taking place. This horrific bloodshed must be brought to an end immediately. We condemn the Buhari/Osinbajo APC government for being slow to act. We call for immediate action to help defend those under attack and the arrest and prosecution of the perpetrators and sponsors of these killings.

Everywhere you look, the abysmal failure of the APC will stare you in the face. Another term for this regime would mean another four years of sorrow, tears and blood. Now is the time to send them packing! At the same time we must not allow the PDP or any other anti-poor pro-capitalist parties like APGA to replace them. They are all the same having shared the same the capitalist economic agenda which also dictate their social and political policies. We need a party that truly represents the interests and aspirations of workers, artisans, poor farmers and the poor masses in general. That is why the SPN has sought registration and fought to ensure its realization.

OUR CONVENANT WITH NIGERIANS 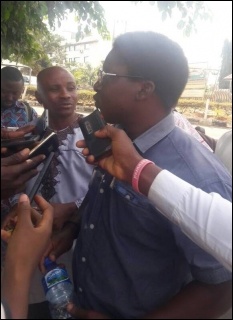 It is not difficult to fix Nigeria. Why other political parties have failed is because they support capitalism and anti-poor economic policies. In contradistinction to them, the Socialist Party of Nigeria (SPN) stands for new, fresh and alternative socialist ideas on how to run Nigeria in the interest of all. We are prepared to play a role in forthcoming elections both in the states as well as the 2019 general elections as a credible political alternative to all those who are disenchanted with the status quo and desire a different kind of politics.

Now the choice before our people is no more between six and half a dozen or between the devil and the deep blue sea. Now the choice is between parties that support policies that enrich a few at the expense of mass majority and a party that supports policies that would ensure collective ownership of the means of production and redistribution of wealth such that very Nigerian is able to live a happy, fulfilled and comfortable existence.

Above all, we will put an end to the capitalist system which is the fundamental source of corruption.

The full details of our manifesto and programmes will emerge in due course after the various organs of our party would have met.