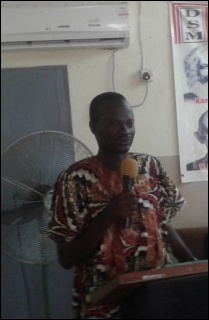 On October 10th, 2017, the Federal High Court, Osogbo Division, sitting under Justice M.A. Onyetenu, gave a victorious judgment to Comrade Alfred Adegoke against the Department of State Security Service (a.k.a SSS). Barrister Adegoke is Osun state legal adviser of the Campaign for Democratic and Workers’ Rights (CDWR) â€“ a platform of the Democratic Socialist Movement â€“ and the Osun State Chairperson of Socialist Party of Nigeria (SPN). He had filed a fundamental right enforcement motion in court about two (2) years ago, against the SSS whose operatives invaded the secretariat of the CDWR and the private legal office of Barrister Adegoke, under the guise of inviting him for questioning, on 11th June 2015. The SSS men, led by one Mr. Iyapo, not only harassed and embarrassed him in the full glare of the public, but also unleashed serious physical violence on him. He was subsequently detained at their office in Osogbo, under an excruciating condition. He was later released about four hours later after intense campaign to free him was launched. However he was seriously threatened by the state director of SSS, not to engage in any public protest in support of workers and pensioners.

The main grouse of the SSS, which was apparently acting under the directive of the Rauf Aregbesola-led Osun State government, was the support the CDWR Osun State Chapter gave to pensioners, who were protesting against non-payment of their pension arrears by the Aregbesola government. The CDWR had issued a leaflet to pensioners and workers during the pensioners’ protest of 10th June, 2015, giving support and solidarity to pensioners and calling on workers to take the same action over non-payment of over seven (7) months’ salaries. This is the basic tradition of the CDWR, which supports working people and youths, in their struggle for democratic rights and better living and working conditions.

The SSS, in a preemptive measure, and acting a script of the Osun State government, launched a violent attack on the secretariat of the CDWR and private legal office of Barrister Adegoke. The SSS had earlier called members of CDWR after the pensioners’ protest of June 10, 2015, wanting to know if CDWR was organizing any action on June 12, 2015. This attack is a trademark of the state security agencies, which always act to protect the ruling elites and corrupt politicians against the working and poor people.

While we in the CDWR have no illusion in the judiciary as an unbiased arbiter when the interests of the working people are involved, this particular judgement is a victory for the working and oppressed people, who are struggling and fighting against anti-poor capitalist policies of the governments and private employers at various levels. It shows that struggle pays. It has also become a precedent, until set aside by a higher court, for the working and poor people.

It further shows the commitment of the CDWR and SPN, which Barrister Adegoke belongs to, to the struggle of the oppressed people. On three different occasions since 2010 when Aregbesola came to power, members of the CDWR and SPN have been harassed and arrested by security agencies on the order of the Osun State government, over their support for the struggles of workers, pensioners, students and youths. This also follows the pattern laid by the Oyinlola/PDP government of 2003 to 2010, which also attacked workers and youths, including supporters of CDWR. This shows the sameness of capitalist governments and parties, who despite their camouflage and artificial differences are the same in politics, policies and programmes

This fundamentally underscores the need to build an alternative political platform of the working and oppressed people, if we are to end the reign of impunity, suffering and poverty being witnessed daily by the working people and youth. This is why we in the CDWR call on labour movement and other pro-labour, pro-democracy civil societies, leftist organizations and socialist movement to begin the process of building a new political alternative of the working and oppressed people. The Socialist Party of Nigeria (SPN), being championed by the Democratic Socialist Movement (DSM), other working class organizations and activists is a right step in the right direction. Despite the attempt of the Independent National Electoral Commission (INEC), acting on behalf of capitalist politicians, to deny the party registration, the party holds a great prospect of serving as the building block of a new political movement of the oppressed people.