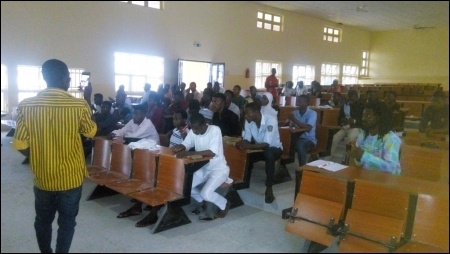 The audience at the symposium – photo DSM   (Click to enlarge)

The symposium kicked off with rendition of solidarity songs after which the moderator Comrade Habeeb Bolarinwa introduced the invited guests. The branch coordinator, Panaf Adeyemi, gave a welcome address entitled “Students’ Union Government FPB: The Missing ‘U’!”. This centred on charging the students to be more involved in the affairs and activities of the students union. At the same time he said that the student union leadership had to be true to their words which was to serve and represent the interests of Nigerian students at all times. 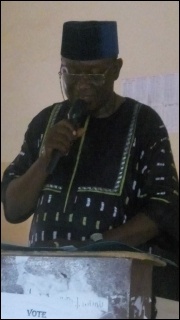 Speaking on the topic “Building an Independent, Virile and Democratic Students Union: Issues and Challenges”, the former Chair of ASUP at Bida Poly, Pita Kolo, pointed out eight vital points that Nigerian students need to observe to bring their aspirations into fruition. He went further to make a comprehensive analysis of how an independent, virile and democratic students’ union can be achieved. This according to him will help to mitigate the incessant attack on students’ individual and collective rights by school management.

He also urged students’ union leaders to be ready to defend the interest of their colleagues in peaceful and non-violent ways. He called for unity and solidarity among students, union leaders and staff unions on campuses. Kolo also said management should not interfere in the running of the students’ union and its affairs. He added that unionism is for sacrifice and not for making personal gain as we have it these days in many campuses.

Comrade Dimeji Macaulay spoke on the topic: “Commemoration of the Centenary of 1917 Russian Revolution”; said the organization was founded on ideals of socialism and fighting with correct method and tactics necessary to defeat capitalism.

He x-rayed on the political and economic situation in the country vis-Å•-vis the original perspective of the 1917 Socialist revolution in Russia to break with capitalism and start to build a socialist alternative. According to him, the high incidence of poverty and underdevelopment in Nigeria today is as a result of the failure of capitalism, worsened by the corruption of the politicians in government who are not interested in the welfare of the masses rather in making profit at the expense of the vast majority. 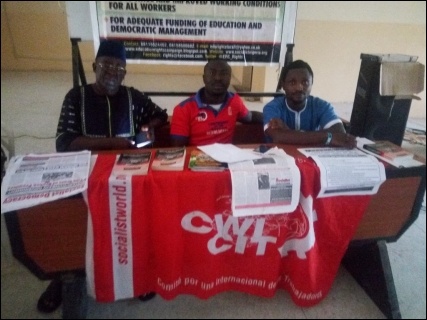 Speakers’ table at the symposium – photo DSM   (Click to enlarge)

The class character of the regime can be seen in the attitude of the government rejecting demands for adequate funding of education as well as of workers’ demands for the timely payment of the existing N18, 000 minimum wage. While dragging their feet on the issue of increasing the level of the minimum wage last set in 2011, they also reject a stipulated maximum wage for the thieving politicians. All the major political parties in power seem united on not paying the minimum wage even when they pay themselves jumbo salaries and outrageous allowances. According to him, all this shows that students, youth and workers can only win concessions through struggles.

He called on students to unite to fight for improved education funding and challenged the staff and students unions to build a movement to challenge anti-poor education policies on campus. Adding that free functional and quality education is only possible under socialism; Macaulay argued that the present capitalist system is not going to fund education because they have subscribed to doctrine of privatization and neo-liberal policies that add to the impact of the ongoing crisis in the world economy.

Going back into history, Macaulay noted that the events of 1917 during which workers took over power is an example to imbibe for us to unite to fight for a better society because it is obvious that both the ruling party, All Progressive Congress, and its main opposition, People Democratic Party (PDP) cannot guarantee a good living standard for Nigerians. He therefore called for building what he calls “a working people political alternative on socialist program” to end the rule of all capitalist parties in the country.

The students’ union president, Ishola Olamilekan, while addressing the gathering promised once again that the executives would not renege on their various promises to the Nigerian students. He condemned the anti-student policies and unnecessary interference of the management in student’s affairs; an example of such was the inappropriate amendment of the constitution of the student union government by the management.

At the end of the symposium, thirty two students signed to join the ERC while a sum of N1, 000 was raised as fighting fund.