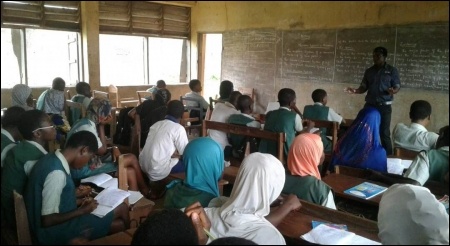 The inaugural edition of a free holiday coaching classes organized by the Oyo State branch of the Education Rights Campaign, ERC, for students transiting from SS2 to SS3 in secondary schools in Ibadan North Local government area of Ibadan entered into the second week on Monday, 14 August, 2017. This is after what can be described as an impressive first week of experimentation.

In the first week of its commencement, the free holiday coaching classes which started on Monday, 7 August, had an enrollment of no fewer than eleven volunteer teachers and seventy (70) students from six secondary schools situated within the Ibadan North local government area in Ibadan. The schools are Community Grammar School, Mokola which also is the venue for the free holiday coaching; St. Theresa College, I.M.G Grammar School; St. Louis Grammar School; Baptist Secondary School and Sacred Secondary School.

Remarkably, five of the volunteer teachers are academics in the University of Ibadan, while six of them are trained teachers in public secondary schools in the local government area. 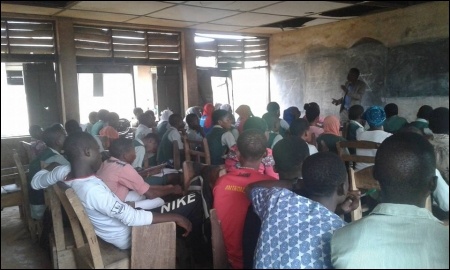 A total number of five core subjects were taught in the first week. These subjects namely Mathematics, English Studies, Physics, Economics and Biology were handled by seven different volunteer teachers including Prof. Clement Kolawole, the current Head of Department, HOD, Teacher Education and former Dean of Faculty of Education, University of Ibadan. He is the second volunteer teacher for English Studies.

Subjects like Chemistry, Commerce, Account, Government and Literature in English which were not taught not in the first week have been added in the second week. 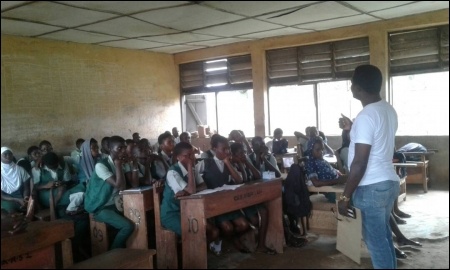 Aside the normal Monday to Friday academic activities, some extra-mural activities like career and counseling talks; drama and poetry are also scheduled as part of the activities to be undertaken between 11am to 1pm on Fridays. This is to create an avenue for students to showcase their abilities and potentials. It was in line with this that, Barrister Ola Adeosun, a human right lawyer and a strong supporter of the ERC, was invited on Friday 11 August to give students a talk on the topic: the rights of children under law and the task to ensure their enforcement.

So far the ERC free holiday coaching in Ibadan has been impressive with a potential for building of a united campaign of students, parents, teachers and the larger labour movement for adequate funding and democratic management of public education in the state. It is in a bid to achieve this, that a public symposium is being planned for the end of the four week programme.

To support this free holiday coaching financially or with materials you can call 08033914091 or send an email to edurightsforall@yahoo.co.uk.