REJECT OUTRAGEOUS BILLING AND DEMAND RENATIONALIZATION OF THE POWER INDUSTRY

COMMUNITY RESOLVE TO CONTINUE THE CAMPAIGN UNTIL EKEDC ENDS OVERBILLING 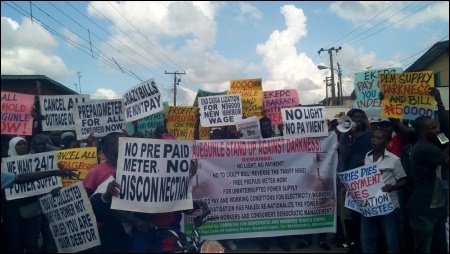 No Light, No Payment – photo DSM   (Click to enlarge)

The No Payment for Darkness, No Disconnection campaign initiated last April by the Ajegunle, Lagos, branch of the Democratic Socialist Movement (DSM) under the aegis of Ajegunle Peoples’ Movement (APM) continued with a protest on Thursday 18 May, 2017.

The protest recorded a turnout of about 250 people comprising old and young, unemployed youths, workers and pensioners, traders, artisans, students and others, were from different neigbourhoods in the community.

For over two months the masses in the community have actively participated in the campaign, which had once forced the Eko Electricity Distribution Company (EKEDC), Apapa, on 25 April, 2017 to call for a negotiation with community leaders.

Members of DSM have used the campaign to underscore the fact that privatization is not only a failure but the electricity crisis has worsened since the sector was transferred to private owners.

The EKEDC, like other distribution companies since November 2013 when the power sector was largely privatized, has only succeeded in extorting electricity consumers through over billing without providing supply.

By 7:15am before the actual kick off of the 18 May protest, people from different streets had assembled. Youth activists that are active in the campaign went round to mobilise more people to join the protest march to Marina Lagos to reject crazy and outrageous bills.

The Action Working Committees elected from each street had collected the recent April bills issued to residents for return to EKEDC as a mark of rejection of crazy billing. Precisely at 8:49am, the protesting crowd started marching out on the road in solidarity songs to Marina, the headquarters of EKEDC. 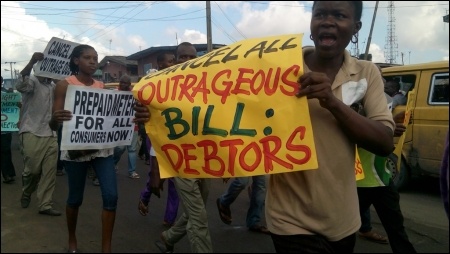 Protesters on the 18 May march – photo DSM   (Click to enlarge)

Different areas and streets like Oja market, Mba, Cardoso road etc and other felt the impact of the protest songs. The banners of the campaign captured the attention of the people. In fact, most working parents, food sellers, commuters etc., joined to call for the immediate reversal of tariff, cancellation of outstanding bills, regular power supply and issuance of free prepaid meters.

Some of the residents who saw the slogans in the banners and placards agreed and identified with them. Dagga Tolar (acting general secretary of DSM) briefly addressed the crowd stating the demands and how the struggle can be sustained.

Members of the DSM and other activists also called on different communities to begin to organize peacefully in to reject crazy billing and demand free prepaid meter amongst other demands. 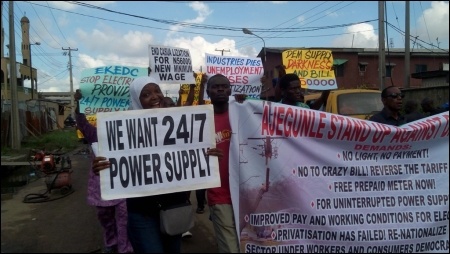 Some of the placards had the following slogans: “No light! No payment!! N24 is extortion reverse to N11kw/h now! Demand adequate compensation for three years supplied of darkness; Crazy bill, we won’t pay! 4000 + 180million=privatization; Dem supply darkness and bill crazy bill; Meter all household in Ajegunle now! Cancel all outrageous bills EKEDC”.

The slogans caught the attention of many people. In fact, an agitated customer (Mr. Emmanuel) who came separately to lodge complaint over crazy bills issued to his community at Mile 2 Estate, Odofin gave solidarity support to the struggle

He said he like the organized weight of the protest and wished to have the same in its community. He lamented that “the monthly bill issued is too exorbitant”. He however agreed that: “Paying the criminal charges need to be put to stop through this means”, he asserted. For Mr. Emmanuel who is a salary earner, he can never cope with the high bills regularly issued.

The key leaders of the campaign addressed the protesters at the EKEDC gate. The EKEDC management staff led by the HOD Media and Communication came down to receive the petition/protest letter but refused to address the protesters publicly. A 14-day ultimatum was issued by the protesters to the company management to reply the petition. However, 5 copies of the SD were sold at the protest march that was covered by journalists from the Sun Newspaper and Sahara Reporter

The protest rally was brought to an end with agreement by the protesters to continue the campaign by holding regular mass meetings in the community. A review meeting was held on Saturday 20 May, 2017 where steps and tactics to deepen and sustain the campaign were discussed. DSM members who participated both in planning strategy and organizing the campaign spoke. We in DSM also use this ongoing campaign to call on the leaderships NLC, TUC and ULC for a joint resolution and action to demand the re-nationalisation of the power sector under democratic management and control and of workers and consumers.