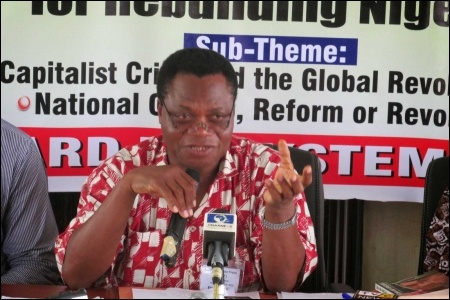 The Democratic Socialist Movement (DSM) joins other socialists, trade unionists, students and working class activists to celebrate Dr. Dipo Fashina on the occasion of his 70th birthday. We proudly celebrate Jingo as one of the best of his generation – a consistent revolutionary and working class fighter.

Dr. Dipo Fashina, famously nicknamed ‘Jingo’, has traversed the academic, pro-democracy and human rights struggle fields for over four decades of his seventy years. Therefore, this occasion affords us the opportunity to also reflect on the crisis of Nigerian educational system, and the inherent crisis of the inequitable Nigerian capitalist state the struggle against which Jingo has dedicated his life.

Dr. Fashina is not a typical routine academic that believes the job of a lecturer starts and ends in classroom teaching and research. During his over three decades at the Obafemi Awolowo University, Ile-Ife, where he taught philosophy, Jingo used his classroom not only to impart knowledge but also raised the social consciousness of his students in and out of classroom to the applause of generations of students that passed through him.

Jingo was widely acknowledged by student and worker populace for his sound contributions at countless symposiums and rallies where students and workers alike were periodically armed by him with ideological and philosophical thoughts to correctly interpret the appalling conditions of their existence with a view to fighting and changing it from the anti-poor capitalist system to a socialist state. But he is never an arm-chair theorist. Jingo has played, and continues to play, active roles in every of the major struggles for better funding of education and improvement in wages and condition of teaching staff, against military despotism and the struggles against anti-poor policies since return to civil rule in 1999. In many of these struggles, Jingo has risked arrests and detentions.

His capacity to harmonize views and work among different genuine radical trends of student activism is tremendous. Although, we might not always agree on all ideological issues (including the characterization of the regime in the old Soviet Union after Lenin’s death which we in the DSM regard as a deformed workers’ state), Jingo is always prepared to work with any tendency that is ready to struggle for the liberation of the working masses from the shackles of capitalism. This unique trait made Jingo the most accessible and easily approachable among radical lecturers especially during many of the debates over both principled and tactical questions among the different currents of left-leaning ideological organizations in OAU then of which the DSM and its predecessors – SCAP, Labour Militant and Militant – were part.

A VETERAN OF STRUGGLE FOR WELL-FUNDED, FUNCTIONAL PUBLIC EDUCATION

As an ASUU activist, Fashina was always at the forefront of the struggle for academic freedom, university autonomy, adequate funding, infrastructural development, improved welfare of staff and students. He was at various times, Chairman of the Academic Staff Union of Universities (ASUU), OAU branch and later became the President of the union. His tenure at the different levels of ASUU leadership witnessed tremendous gains through consistent struggles against the ruling class on its bad policies on public education and the rights of Nigerian people to well-funded public education

Never found wanting at the barricade for over three decades of struggles against the military and its civilian wing of the anti-poor, pro-rich capitalist corrupt ruling class. Jingo helped to cement the revolutionary tie between the ‘gown and the town’ by identifying with struggles of the working masses outside the confinement of the university walls

To this extent, he has been involved in all the struggles of the labour movement for increase in minimum wage and against fuel price hike, deregulation, privatization and commercialization of our collective patrimony. As a consequence of all these activities, Jingo is the National Chairperson of the Joint Action Front (JAF) , the civil society partner of the Nigeria Labour Congress (NLC) and Trade Union Congress (TUC) in the Labour and Civil Society Coalition (LASCO) in which the DSM is playing an active role.

WHAT OUR BEST TRIBUTE SHOULD BE

For four decades, Jingo has etched his footprints at the barricade for persistent and consistent struggles His sacrifice and selfless service in Nigeria can never be forgotten.

The best honour we can bestow on him is simply to continue the struggle for adequate funding of education, respect for democratic rights and against all anti-poor capitalist policies. However as the DSM often argues, the struggle for good governance and a total break from capitalist neo-liberal economic policies of privatization, commercialization, deregulation and devaluation of currency which places the commonwealth of Nigeria in the hands of a corrupt and privileged few cannot succeed without a political alternative. Jingo himself fully recognizes this as can be proven by his consistent agitation both within the Joint Action Front (JAF) and other levels for a political alternative that stands for the working class.

Unfortunately, several factors including the ideological capitulation of the leadership of the labour movement has made this impossible. The Labour Party (LP), formerly Party for Social Democracy (PSD), formed by the NLC in 2004 has now been turned permanently to the second-eleven of the anti-poor capitalist parties. Meanwhile, the complete tragedy that has befallen the Nigerian working masses both socio-economically and politically over the last two years that the Buhari/APC government came to power has proven so eloquently that no segment of the corrupt and discredited Nigeria capitalist ruling elite can run this country in the interest of the downtrodden.

Despite claiming to be different, Buhari’s government has turned out to be a defender of capitalism and the interest of the rich. He has carried out far more vicious pro-capitalist attacks including partial removal of fuel subsidy and increase in pump price of fuel, increase in electricity tariff and devaluation of the currency.

So great is income inequality in the country today and the concentration of wealth in a few hands that just 5 richest Nigerian billionaires have enough wealth to banish poverty from the country. According to Oxfam, Nigeria’s richest man, Aliko Dangote, earn 8,000 times more in a day than an average worker spend on basic needs in a year. At the peak of the economic recession in 2016, about 78 bank executives earned over 10.34 billion naira in dividend income while many bank workers lost their jobs. Buhari himself has continued the practice of allocating millions to cater for the privileges of a few political office holders as the 2016 and 2017 budgets demonstrate. Meanwhile, tens of millions of Nigerians are without jobs while many more have been further impoverished in the last two years.

Therefore no greater task confronts the community of left activists, trade unionists and working class fighters than that of building a mass working people political alternative on a socialist program as a vehicle to mobilize the working masses and downtrodden to wrest power from the capitalist ruling elite and begin to run society in the interest of the mass majority through the nationalisation of the commanding heights of the economy under public democratic control and management.

Jingo, given his vast political authority and immense popularity as a widely-known and trusted fighter for the downtrodden, can play a central role in that effort by putting himself forward as the rallying point for the building of such a party and its foray into electoral politics. In doing this, Jingo would be bestowing to the struggle of the working class a huge contribution which would accelerate the process of the overthrow of capitalism and the enthronement of a democratic socialist system under which Nigeria’s wealth can be commonly owned and managed by the working masses in the interests of all.

Despite our current campaign for the registration of the Socialist Party of Nigeria (SPN) which we formed in 2012 alongside other working class activists, we in the Democratic Socialist Movement (DSM) are prepared to work with Jingo and anyone or any movement that takes the initiative to provide the working masses and poor Nigerians with a clear and viable political voice.

Once again, happy birthday Jingo, the struggle continues and victory is assured!

This was circulated as a leaflet at the May 30, 2017 event held in Jingo’s honour at OAU, Ile-Ife