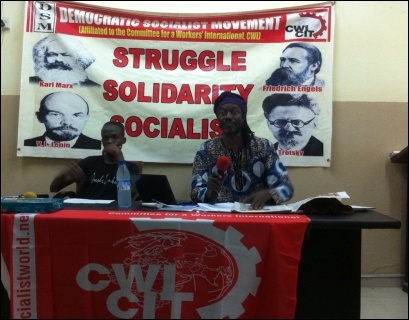 Comrade Dagga Tolar (Segun Ajayi) has won re-election as Chairman of the Nigeria Union of Teachers (NUT) in Ajeromi Ifelodun Local Government Lagos State. Another three positions were won by candidates of the Teachers Light Mind (TLM) â€“ the electoral platform upon which Dagga and other radical union activists contested. These are the positions of Deputy Chairman, Treasurer and First Examiner of account.

The election was held on Thursday 25 May 2017 at the NUT secretariat, Ajeromi Ifelodun. It was an election fiercely contested by the rightwing in the union using primordial sentiments, lies, blackmails and divisive rhetoric. They went as far as trying to drive a wedge between primary school and secondary school teachers by raising the sentiment that it is now the turn of the primary school teachers to lead.

The victory of Dagga with 174 votes â€“ the highest of any candidate for any office in the union â€“ is a clear rejection by rank and file teachers of the policies of the rightwing and everything they represent. It shows that rank and file teachers recognize the radical programmes that Dagga Tolar, a known socialist and working class activist, has always stood for, and are prepared to unite around a banner of struggle. He was the only candidate in the election who publicly stood for a struggle for N56, 000 minimum wage.

Dagga Tolar is the Acting General Secretary of the Democratic Socialist Movement (DSM) â€“ the CWI in Nigeria and a known activist in working class struggle in Nigeria. He first won the position four years ago against the entrenched rightwing in the union bureaucracy. However, because he was the only radical voice in the union leadership, he was soon isolated by the bureaucracy which frustrated every of his efforts to build the union into a credible platform that could defend teachers interests at all times.

This second victory is significant in the sense that together with Dagga will be three additional voices in the union leadership. This would assist greatly in pushing for radical programmes and actions to be taken up by the union to defend members’ welfare and fight for improved funding of education both in Ajeromi Ifelodun and Lagos as a whole. (More comprehensive report and analysis of the election to come later)