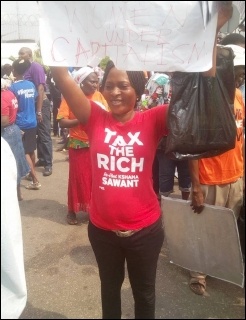 Perhaps, for the first time in Nigeria marches were held to celebrate this year’s International Women’s Day. In Lagos there were two such marches. One was organized by a coalition of civil society organizations led by Women Advocates Research and Documentation Centre (WARDC) and supported by the women commissions of Lagos State Chapters of Nigeria Labour Congress (NLC) and Trade Union Congress (TUC). The second one was organized by the women commission of the United Labour Congress (UCL), the new trade union federation that recently emerged from the split in the NLC.

On their parts, the national bodies of the NLC and TUC, through their respective women commissions, continued with tradition of holding a public symposium on the international women’s day. While the NLC held a symposium in Abuja, the TUC held its own in Lagos.

Members of Democratic Socialist Movement (DSM) participated at the two demos and symposia all in Lagos where we circulated altogether about 2000 copies of a leaflet we issued. 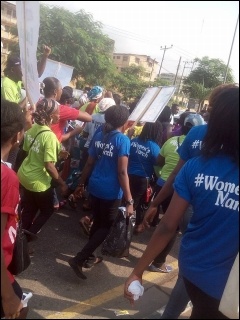 The women’s march organized by the civil society organizations had over 1,000 participants mostly women. The demo, which took off at Ikeja Under Bridge, ended about 5km away at the office of the Lagos State governor. There were stop overs to address the marchers, passers-by and bystanders on the significance of the day as well as inequality and oppression suffered by women in the society. The speeches also touched on issues like girl child education, gender base and domestic violence women political participation and health care. A flier that contains campaign promises made by Lagos state Governor Ambode was also circulated.

On reaching the Lagos state Secretariat, the marchers found the road leading to Governor’s office barricaded by the police. The marchers decided to force their way through in defiance to the police. A woman and a police officer sustained injury in the ensued fracas. To add insult to injury, the marchers waited for over an hour at the main gate of the governor’s office without the governor showing up to receive them.

Unfortunately, the organisers created an impression that the demo could not be considered a success without seeing the governor. Indeed many of the women left, after the demo was dispatched, putting on long faces. But, this was erroneous as the demo did not depend on seeing the governor, it was a success judging by the public awareness it created for International Women’s Day and on women issues while the marchers were on the streets.

At the TUC symposium, there were over 300 women with a very few men including the President and General Secretary of the federation in attendance. Everybody was clad in a uniformed ankara fabric specially chosen for the occasion. The TUC President Bobboi Bala Kaigama pledged the support of the trade union federation to the fight against all forms of women oppression and exploitation. Fine words, but they need to be translated into action. 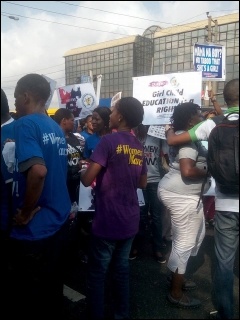 It was organized by the women commission of the United Labour Congress (ULC) â€“ a new labour centre formed by individuals and unions that rejected the outcome of the last delegate conference of the Nigeria Labour Congress (NLC).

The ULC’s president is Joe Ajaero while its new General Secretary, announced during the women’s day event, is Didi Adodo â€“ a former General-Secretary of the Iron and Steel Workers Union and a former commissioner in Adams Oshiomhole’s cabinet in Edo State.

Unfortunately the march was more of a carnival, not a campaigning action. To the blare of trumpets and drumbeats, marchers danced along the highway. Not a single placard was in sight! A flier was produced containing some demands including one for “woman presidency in 2019”. There were no attempts to have any speech during the course of the march.

The march ended at the NUEE secretariat with a press conference. And at the press conference, no real debate took place. Except a brief reference to it in the prepared speech delivered by the women committee’s chairperson Havilah Ofuye, there was no attempt to draw out the revolutionary origin of the International Women’s Day or place tasks on the unions about the need to take seriously discrimination against women in the workplace.

It does not appear, going by the mood and character of the celebration, that the unions take the issue of women oppression seriously. The banters within the hall were banal and depressing to say the least. A few were plain sexist but there were no outcries. Even when Joe Ajaero spoke, his speech was filled with too much lighthearted humour almost passing off the impression that women issues are not serious issues at all. For instance, were it to be other issues like minimum wage that were being discussed, not the same mood would have obtained in the hall. These are very disturbing signs indeed and it is part of the reasons very few women are active in the unions.

This is also linked to the repeated failures and betrayals of the union leaders which make many of their members, including women, not to have confidence in them. A female worker told me that while the turnout at the celebration was low was because some of their colleagues were afraid. When I asked what they could be afraid of, she said perhaps they could be scared of being penalized by their employers if they left work to attend the event. This may not be accurate, but it nevertheless reveals the attitude of the rank and file towards the union tops. There is lack of confidence in the leadership and this means many are not prepared to risk their skin. 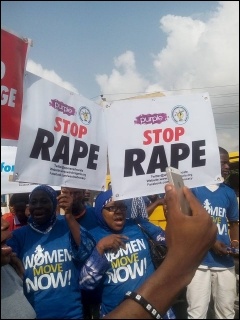 A highlight of the press conference was the ULC president Joe Ajaero’s response to women’s demand for a female president by 2019. According to him, while this is desirable however charity must begin at home. Even in the unions that are expected to stand for women, women are relegated to d background such that female-dominated unions like the Nigerian Union of Teachers (NUT) and the National Association of Nigeria Nurses and Midwives (NANNM) have never produced female union presidents.

This statement from a member of the labour leadership is unfortunately correct but it is not an indictment of women workers but of the labour bureaucracies who have successfully alienated both rank-and-file male and female workers from active involvement and participation in the unions because of lack of democracy and their habitual compromises and betrayals.

What however need to be stressed is that the desire by female workers for a female president cannot just be taking as a gender issue alone. For such a demand to have any significance for the class interest of the working masses, it must be linked to the necessity of the working class taking political power and ending capitalism which reinforces women oppression. This will require the building of mass workers’ political party based on socialist programmes â€“ the same programmes the Bolshevik party implemented when it took power in Russia 100 years ago in a revolution detonated by working women on 8 March 1917.