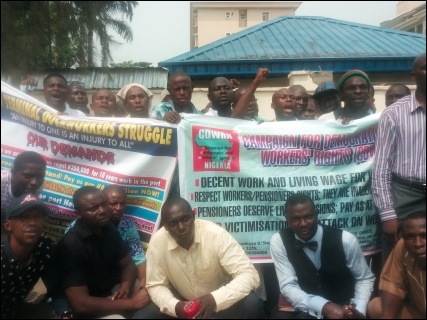 About two hundred dock workers stormed the premises of the National Industrial Court, Ikoyi, Lagos, for the first hearing of their case on Wednesday, 22 February, 2017 between the modern enslaved dock workers and Energy Neftegas Limited (Nig).

The banners of ENL/Terminal Dockworkers Struggle and Campaign for Democratic Workers Rights (CDWR) were hoisted respectively to popularize the demands of the workers. More so, placards with sharp demands like “ENL pay us our ten years salary,” “Nationalize the Nigerian port under democratic control and management by workers”, etc. etc. were also raised to capture the attention of passer-by and residents.

Solidarity songs were chanted to enliven the spirit of the workers and this was done for about fifty minutes. Later on, leaders of the group, Adebisi, Gerald and others spoke to their members on why they were at the court while stressing that, with spirited struggle, the ENL will be forced to pay the salaries callously owed for ten years. Members of Ajegunle DSM who have been organizing the workers for several months now were equally there to solidarize with the struggle.

The court hearing started around 12: 30pm and ran for almost two hours. The case was presided over by Justice Kanynip. According to the judge the case brought before him by Energy Neftegas Limited (Nig) was “criminal” and “illegal” because of the way the collective bargaining was maneuvered by them.

The judge also said that according to the Trade Union Act the Sea Terminal Operators Association of Nigeria (STOAN) was never the principal group to sign for “collective bargaining” because they are not a registered Trade Union.

Subsequently the case was adjourned to 30 May, 2017. After the hearing, Barr Gabriel and Prof. Fagnon of Centre for Human Rights and Constitutional Democracy in Africa respectively addressed the workers. Ajegunle DSM members who addressed the workers also called for the payment of the dock workers salary by ENL and the nationalization of the Nigerian port under workers democratic control and management. By and large, the outing registered a huge success on the part of the dock workers present at the Court sitting for their campaign.