Second protest in one week highlights the changed situation in Nigeria

Second protest in one week highlights the changed situation in Nigeria


Second protest in one week highlights the changed situation in Nigeria 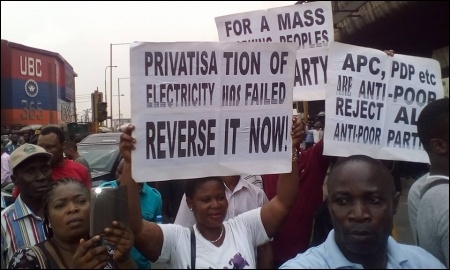 For the second time in one week, thousands marched out in two cities (Lagos and Abuja) on Thursday 9 February 2017 to protest the growing hardship under the Muhammadu Buhari/APC government. Thursday’s protest rally was called by the Nigerian Labour Congress (NLC) and the Trade Union Congress (TUC). The original agenda of the rally which was tagged “2nd National day of action against corruption and for good governance” – a follow up to the first edition held on 10 September 2015 – was to “reinvigorate public support” for government’s anti-corruption war.

According to a statement published on the NLC website on 31st January 2017, the objective of the rally was simply to demand that “measures being put in place to translate into concrete measurable results in more recovery of stolen funds, conviction and conclusion of cases. Equally, there is the need for a popular mass movement support for the government to call for Good governance to overcome the resultant full fledge recession, and free for all multiple exchange rate regime, which has very negative effect on manufacturing and other sectors of the economy”

While waiting at the NLC secretariat in Lagos for the rally to begin, a trade unionist told DSM members and other activists about the debate that had raged within the NLC before affiliates could agree to the rally in Lagos. According to him, many activists were enraged that the NLC could be planning a pro-government rally to support a so-called anti-corruption war in a situation where workers and retirees are not being paid in over 27 states and while those who are receiving their salaries as at when due have found their wage incapable of meeting their basic needs due to inflation. This and many more was why in the run up to the Thursday protest rally, the NLC President Ayuba Wabba talked radically. During the protest rallies in both Abuja and Lagos, the labour leaders were forced to reflect as much as possible the anger and frustration of the working people side by side with talking about supporting Buhari’s anti-corruption effort. 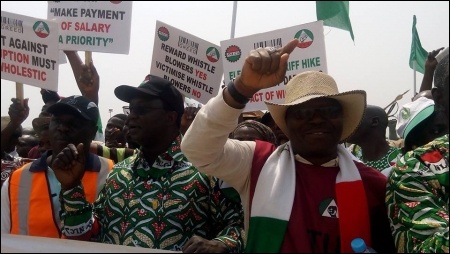 In both protests, the mood of the labour leaders sharply contrasted with that of the protesters. In Lagos for instance, songs and chants on the protest were decidedly anti-government with workers chanting “thief, thief” as the names of political office holders starting from Buhari, to Osinbajo, Saraki, Dogara, Tinubu, Amaechi, Fayose etc were called out. In Lagos, some activists who had participated in the Monday February 6 protest also joined Thursday’s action.

At Maryland, a disagreement ensued about where the protest march should end. As usual, the labour leaders wanted it to end at the governor’s office where they would submit a written petition and give the floor to the Governor or his representative to make fine speeches. Over the years, many activists have grown frustrated with this method of the labour leaders especially because it blunts the angry mood of protests while erroneously portraying the government as an entity that listens when in reality it does not. Because of this disagreement, a group of demonstrators numbering not more than thirty split and marched to the Gani Fawehinmi Freedom Park at Ojota â€“ the historic site of the January 2012 mass demonstrations against fuel subsidy removal by the Jonathan/PDP regime.

While the reasons the demonstrators split off is no doubt valid, yet the method of a small breakaway is mistakened, could isolate those critical of the leaders and be seen to promote disunity. A better method would have been to stay with the larger body of protesters to preserve the unity of the movement while continuing to sharply criticize and debate the wrong method of the labour leaders which consists in directing mass anger into safe channels. What protesters who are angry at the compromises of labour leaders must know is that there can be no short cut to tackling the crisis of leadership of the working class. As can be seen in the Thursday’s protest rally, the bureaucratic labour leaders and the working class are not one and the same – the latter is usually ready to fight for its emancipation while the former is often guiding and restraining the anger and potential of the latter to fight to transform society. Therefore, the only way forward is not to abandon the labour movement but for activists to fight to reclaim it from careerists and rightwing elements that populates its leadership. This task cannot be achieved when we split from protests or abandon the working masses to the bureaucratic leaders.

LAGOS: NLC and TUC protest against corruption and for good governance 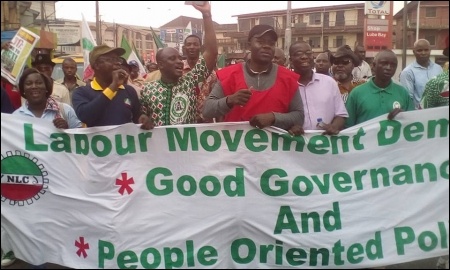 Immediately after the protest rally held on Monday 6 February, 2017 where protesters, socialists, activists from different groups and organizations participated to protest the failure of the Buhari regime, the NLC and TUC organized a protest rally on Thursday 9 February. The rally in Lagos started from the NLC secretariat in Yaba. The protest march hit the road of Yaba around 09:45am and it was led by the NLC Vice President Amaechi. Hundreds of workers sang behind the NLC and TUC banner with chatted solidarity songs when marching on the street.

Placards, some of which were provided by Democratic Socialist Movement (DSM), were raised by workers. The placards had slogans demanding new minimum wage of N56, 000, 26% budgetary allocation and free quality education, re-nationalization of the power sector, no jumbo salaries for public looters in the country, prosecution of corrupt capitalist politicians, APC, PDP and all profit parties are enemies of the Nigerian masses, build a new mass party to change the system of capitalism etc.

While addressing both the workers and youths at Yaba after kick-off and Ojuelegba respectively, speakers after speakers made it clear before the protesters that the rally was to call on the Buhari government to adequately fight corruption not only by going after corrupt officials but also by improving the lives of the people and creating jobs for the army of unemployed. A situation where workers continue to survive on N18, 000 minimum wage amidst high food prices and inflation is a recipe for corruption. 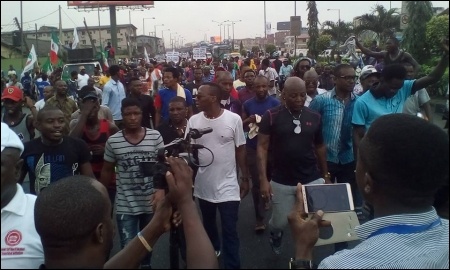 The protesters marched from Yaba down to Maryland to Alausa Secretariat which was the end point of the rally. Just like the Monday protest, the state repressive apparatuses (Police and other security officials) were able to comport themselves without making any attempt to provoke the crowd.

When the protest marched reached Alausa, labour leaders again addressed the protesters. Interestingly, the issue of the new minimum wage of N56, 000 was not raised by the labour leaders when addressing the government officials and parliamentarians.

During the protest rally, members of the DSM handed out leaflets and sold the Social Democracy editions of May 2016, Aug/Sept 2016 and Nov/Dec, 2016. At the end of the day, we were able to sell more than 49 copies of the SD at the protest rally. 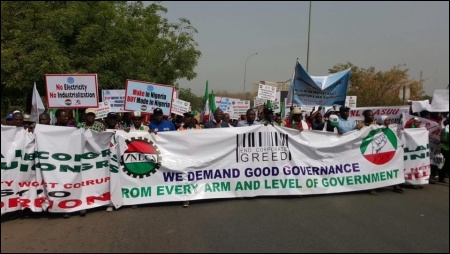 About one thousand workers drawn from different unions affiliated to the Nigeria Labour Congress (NLC) and Trade Union Congress (TUC) gathered at the Unity Fountain in Federal Territory, Abuja to protest against economic hardship and demand good governance from all arms and tiers of government. Many of the workers came out early as 8am to join the protest.

The protesters were addressed by the leaderships of the different Unions and also representatives of Civil Society that were present. All of the leaders who spoke expressed worry on growing inequality and high cost of living. One of the speakers, Dr. Demola Aremu of the Academic Staff Union of Universities (ASUU) pointed out that the situation of things is becoming unbearable and the masses of people must rise to reject this hardship and demand prosecution of all political of holders that are looting the wealth created by the people.

The protesters marched from unity fountain towards Maitama and stopped the protest at the entrance of the presidential Villa where some selective leadership of Unions went inside to submit protest letter to the Acting President. However, some workers argued that all protesters must enter the Villa to speak with the Acting president or the acting president should come to them but this was rebuffed by the trade union leadership. After that the protesters marched down to National Assembly where they were received by the Senate President.

One thousand copies of leaflet of Democratic Socialist Movement (DSM) were circulated and it was well received by the workers as well as passers-by and bystanders.