SPN Holds Protest to Demand Issuance of Certificate of Registration 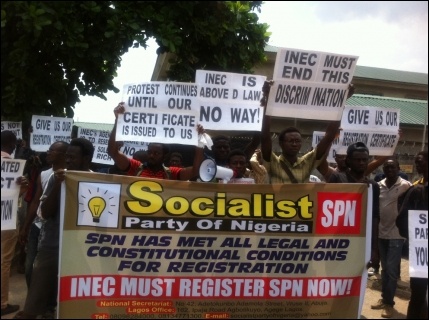 Members of the Socialist Party of Nigeria (SPN) held a protest march on Monday, October 24, 2016 to the Lagos office of the Independent National Electoral Commission (INEC) over the non-registration of the party despite having fulfilled all legal and constitutional requirements, including onerous ones like payment of one million naira and having members of National Executive Committee in 24 states and Abuja. 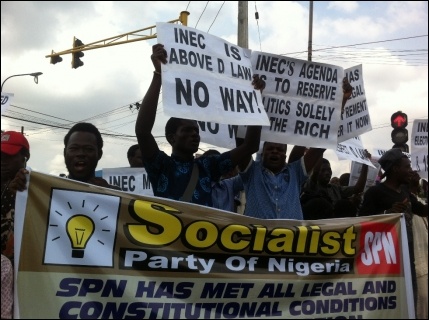 The protest, which had about 50 members of the party from across the country, took off at Sabo Bus Stop, Yaba, with a rally that attracted the interest and support of the bystanders and passersby some of whom came to enquire about the party. In addition to the English language, speeches were delivered in Yoruba and Hausa languages in order to effectively communicate with the people 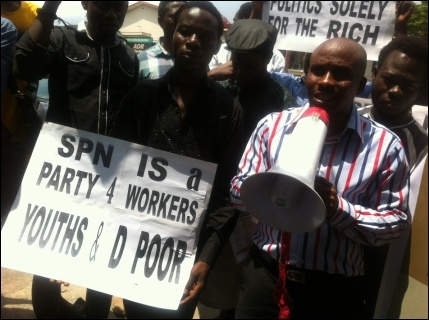 The protesters later marched about 400 meters to the INEC office where a demo was held and addresses were given by the leaders of the party including Chinedu Bosah (National Secretary), Tijani Mikailu Mohammed (the North West Deputy National Chairperson, DNC), Alfred Adegoke (Legal Adviser) and Dagga Tolar (SPN NEC member and acting General Secretary of the Democratic Socialist Movement (DSM). Mr. Abiodun Amosun, INEC Operation Officer, who led other officers of the electoral body to meet the SPN protesters, promised to deliver the SPN message demanding immediate issuance of certificate of registration to the INEC national headquarters. 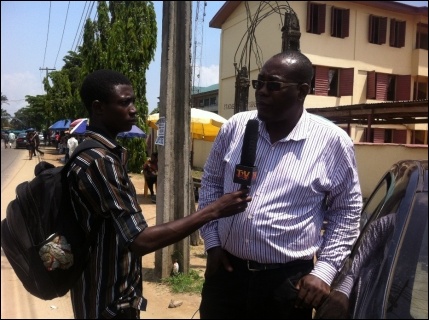 The Joint Action Front (JAF) was represented at the demo by its Deputy Chairperson Achike Chude, while the JAF Chairperson, Dr. Dipo Fashina, sent a solidarity message in which he among other things “calls for a sustained solidarity struggle of the socialist and popular organizations to ensure the registration of the SPN” (See the full solidarity statement below) 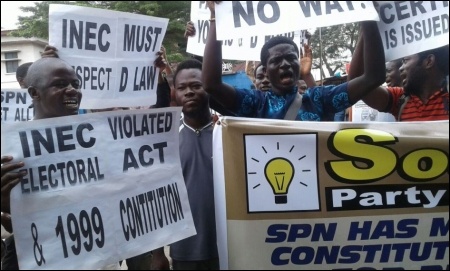 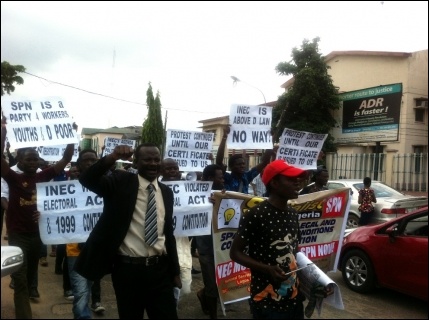 It is instructive that the protest rally was held in the area which is a stronghold of Buhari and APC, especially ahead of 2015 elections, without any hostile reception. Indeed, chants that lampooned Buhari and APC over the degeneration of the capitalist economic crisis under their watch, without also sparing the PDP, were well received by the ordinary masses. This was also reflected in an impressive sale of 23 copies of Socialist Democracy (SD), paper of the DSM, with lead articles on economic recession and planned sale of national assets at a small rally organized by a single organization. Also a number of people happily gave us their phone numbers with the agreement that they would like us to visit them later for more discussions and invite them to future activities of the party. We might not have got such warm reception say a year ago. 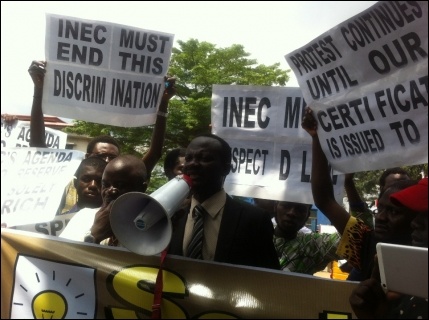 All this underscores the growing disillusionment in Buhari by the masses and also the potential of a pro-working people political alternative to gain support of the poor masses. The capitalist ruling elite through the INEC are obviously in mortal fear of such potential which explains their refusal to allow the emergence of the pro-masses parties like SPN that offer anti-capitalist alternative. 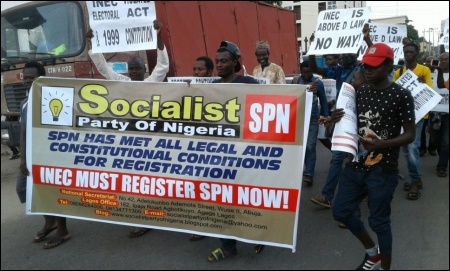 This is also why despite being already in court challenging the undemocratic action of the INEC, we hold political actions that seek the intervention of the general public, labour movement and pro-masses’ organizations that could ensure that the INEC is compelled to respect our right to form a political party. We plan to hold another protest action on October 31 in Abuja which is the day our matter against INEC will again come up for a hearing at the Federal High Court. If you wish to find out more about the SPN or support the campaign for its registration, please contact the following: Tel: 08098284000 E-mail: socialistpartyofnigeria@yahoo.com; Blog: www.socialistpartyofnigeria.blogspot.com

About 1,500 copies of the SPN leaflet articulating the demands of the party were circulated.

Below are the SPN statement issued to media and the solidarity message by the JAF chair:

WE DEMAND OUR CERTIFICATE OF REGISTRATION NOW

We members of the Socialist Party of Nigeria (SPN), together with civil society and pro-democracy activists, hold this protest march today Monday, October 24, 2016 to demand the immediate issuance of our registration certificate by the Independent National Electoral Commission (INEC) having fulfilled all legal and constitutional requirements for registration as a political party.

As it could be seen from the chronicle of events below, we can only conclude that the refusal of the INEC to register us is politically motivated and not unconnected to the resolve of the ruling elite to prevent the emergence of pro-masses’ parties like the SPN that offer anti-capitalist alternative. This is why despite being already in court challenging this undemocratic action of the INEC, we strongly hold that only the intervention of the general public, labour movement and pro-masses organizations can ensure that INEC is compelled to respect our right to form a political party. Indeed, we have been in court for the past two years without the matter proceeding to hearing as it has been afflicted with many adjournments arising from the tardiness of the judiciary as well as the deliberate attempt by INEC to frustrate the case.

Below is a chronicle of events and exchanges between us and INEC:

Going by the chronicle of our engagement with INEC over the last 3 years, it is clear that INEC has treated the SPN and its desire to be registered as a political party unjustly. We therefore appeal to the general public and the working masses of this country to join us to demand that INEC release to us our certificate of registration so that the SPN can play active role in the forthcoming electioneering process with a view to presenting Nigerians with a pro-masses alternative political platform that can rid Nigeria of the prevailing crisis of mass poverty and underdevelopment. We strongly believe that in a ‘democracy’ everybody and groups have a right and the freedom to organize socially and politically free from orchestrated bias and discrimination. This policy of INEC that makes registration and party formation highly expensive encourages corruption in governance, something that SPN is opposed to.

We aver that the SPN has met all relevant registration requirements as spelt out in the 1999 Constitution as amended and the 2010 Electoral Act as amended. Therefore, there is no reason for INEC not to have registered the SPN. This is one of those test cases at freeing up the political space that is dominated by pro-establishment political parties and winning the respects of the rights of the masses to organize socio-politically. Should this right be taken away, the process to deepen the democratic space is lost.

Hence, we are appealing for the intervention of the general public, labour movement and pro-masses organizations on this matter to aid and give voice against these undemocratic policies of INEC. Your intervention could take the form of issuing public statements, writing official letter(s) to INEC and organizing mass protest in support of democratic rights of political parties like the SPN.

STATEMENT BY JAF CHAIRPERSON to the SPN Protest Rally to INEC held in Lagos, 24th October, 2016

1. In full recognition of the constitutionally guaranteed right of all Nigerians to form and join a party of their choice,

2. Noting that the SOCIALIST PARTY OF NIGERIA has fulfilled all known requirements for registration,

3. Being clear that the Constitution of Nigeria does not forbid socialist parties,

4. Affirming that the continued refusal to register the SOCIALIST PARTY OF NIGERIA is arbitrary, and will deprive Nigerians of their freedom of political choice

5. Calling on all Nigerians to rise against crass class injustice, JAF EXPRESSES SOLIDARITY WITH THE SPN and calls for a sustained solidarity struggle of the socialist and popular organizations, to ensure the registration of the SPN. WE ask: .WHO IS AFRAID OF SPN? WHO IS AFRAID OF SOCIALISTS? Not the people, not the workers, not the peasant farmers, not the unemployed, not the poor WE NO GO GREE.SPN MUST BE REGISTERED.IT IS A DEMOCRATIC ALTERNATIVE TO RULERS PARTIES.

For and on behalf of JAF