OYO STATE: WHAT NEXT AFTER SEVEN WEEEK STRIKE?

SPN AND CDWR HOLD PUBLIC SYMPOSIUM TO REVIEW STRUGGLES AGAINST NON-PAYMENT OF SALARIES, PENSIONS AND OTHER ATTACKS ON WORKING PEOPLE IN THE STATE 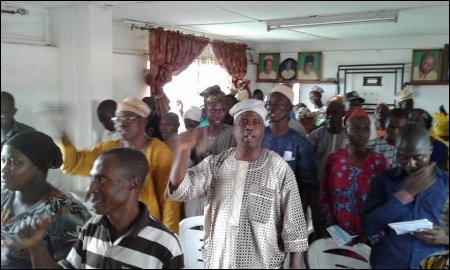 It was a charged atmosphere of debate and discussion on the 17th of September, 2016 at the Oyo State Secretariat of the Nigeria Labour Congress (NLC) during a public symposium jointly organised by the Oyo State chapters of Campaign for Democratic and Workers’ Rights, CDWR, and Socialists Party of Nigeria, SPN, to review the recent struggles against non-payment of salary and pension arrears as well as discuss attacks on the working people in the state.

The symposium drew together over 75 participants comprising workers, traders, artisans and students across the state. Notably among unions, associations and organisations represented are NUT, NULGE, MAHWUN, NASU, JUSUN, OPC, CDHR, and CWA among others.

This was the first time a gathering of this kind would be convened since the suspension of June and July’s seven week long strike and mass action embarked upon by the Oyo state workers against non-payment of salary/pension arrears and the attempt by the state government to sell off some public schools in the state. Its aim was to discuss issues related to the living and working condition of the working people in the state and draw conclusions on what needs to be done next.

In attendance as speakers were Alhaji S W Olojede, Chairman, Oyo State Chapter of the Nigeria Labour Congress, NLC, Publicity Secretary of the Oyo State Chapter of Trade Union Congress, TUC who represented the State Chairman and Dagga Tolar, member of National Executive Committee (NEC) of Democratic Socialist Movement (DSM) and the Chair Nigeria Union of Teachers (NUT) Ajeromi-Ifelodun local government area in Lagos State. The meeting was moderated by Abbey Trotsky, Oyo State Coordinator of CDWR, who also doubles as the state secretary of the Socialist Party of Nigeria.

The Oyo NLC chairman who was the first speaker gave an update on the labour and government committee set up to look into various controversies that surrounded the plan by the state government to sell off some public school under the policy of public private partnership, PPP. According to the NLC chair, the committee has completed its job and the recommendations have been submitted to the state government. According to him part of the recommendations calls on the Abiola Ajimobi-led government to halt the plan to sell off schools in contention and their management and control must be placed under the committees of parents and communities.

Informing the gathering of the update of the committee’s work was important as it shows that the seven (7) weeks struggle embarked upon by the Oyo State workers did not just end without gains and concessions albeit limited.

It is also important to stress that if not for the struggle the Ajimobi-led government would not have suspended its decision to sell off about 30 public schools in the state let alone set up any committee to review various issues that are related to it. Also mentioned as part of the concession won by the struggle is the two months’ salary arrears the Oyo State government was forced to pay the public workers at the end of the 7 weeks struggles. If Oyo State workers had failed to embark on the strike, their salaries would not have only been cut but other attacks like retrenchment would have been carried out under the guise of the economic recession. 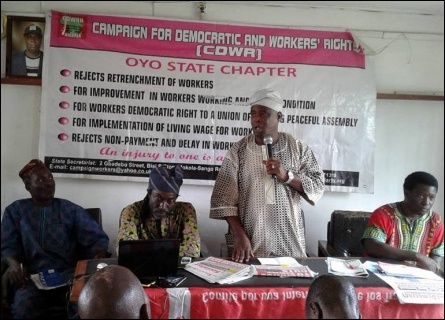 On the question of economic recession, the NLC Chairman stressed the point that it is largely created by corruption and massive looting and embezzlement of the national treasury by members of the ruling elite and that any attempt to make the working people the scapegoat of the economy recession must be resisted by the Nigerian workers. This especially when it is obvious that Nigeria workers and the working people benefit nothing significantly in term of improvement in living condition in the period of the economy boom.

Dagga Tolar in his own speech commended the leadership of the Oyo State chapter of NLC for leading the last seven weeks struggle of the working people in the state. This struggle which was described as heroic and historic in the history of working people in the country will continue to serve as a point of reference for workers struggle in the country in time to come. However, given the national character of the issue of non-payment salaries and pensions in the country, Dagga tasked the leadership of the NLC and TUC on the urgent need for the commencement of a 24 hour national strike and mass action in the first instance to centralise the growing agitations and struggles against non-payment of salary and pension across the country.

This was suggested as the best way to kick-start the preparation and mobilisation for the struggle for the implementation in the national minimum wage as well as against other looming attacks on the economic rights of the working people which will inevitably carried out by the Nigeria ruling elites under the pretence of the deepening economy crisis.

Dagga also charged the leadership of the two trade union centres in the state, particularly the NLC, on the need for the production of political document to review and draw out the necessary lessons of the seven weeks industrial action. Going by the current exchanging rate of Naira to a dollar, Dagga also revealed that the N18, 000 minimum wage approved for Nigeria workers in 2011, though refused to be implemented by the Nigeria government at all levels regardless of political parties, is far below what the Nigeria workers were taken as salary as far back as the 1980s when the minimum wage was N125. 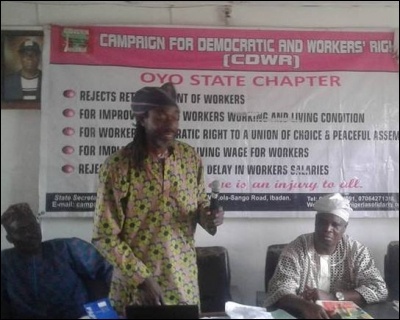 Dagga however stressed that while working people must always struggle for improvement the fact is that not until when the system of capitalism, the socio-economic philosophy that drives the Nigeria economy is transformed along a socialist programme of nationalisation of the commanding height of the economy under the control and management of the elected representatives of the working people, the condition of the working people will be problematic.

It is in the light of this that Dagga informed the gathering of the on-going effort of members of DSM and other change-seeking elements to register Socialist Party of Nigeria (SPN) and how far INEC has tried to frustrate the effort. Therefore, Dagga charged the audience particularly the leadership of trade unions to follow the example of the DSM in a bid to provide the working people with a long-overdue independent political party with a socialist programme as an alternative to all the existing anti-poor political parties in the country today.

He also in his submission urged the state labour leaders to be more vigilant over the recommendations that control and management of public schools must be handed over to parents and community. He stressed this point because it could turn out be a booby trap deliberately set by the state government to completely abdicate its constitutional responsibility of proper and adequate funding of public education in the state. Therefore, the recommendation must also include adequate funding of the schools by the government.

The need for a 24 hours national strike to heighten and centralise the struggle against non-payment of salary and pension arrears was welcome by the NLC chair in his brief response to Dagga’s speech. The call was also supported by the Publicity Secretary of the Oyo State Chapter of Trade Union Congress who also gave a solidarity speech on behalf of the state chairman that could not attend the programme.

Comments and contributions including solidarity messages from some left organisations like CDHR and CWA were also taken after which the programme was brought to an end with a solidarity song led by Comrade Bayo, the Oyo state DSM financial officer who earlier gave a vote of thanks and closing remarks.