Oyo Workers insist on “No Pay No Work” 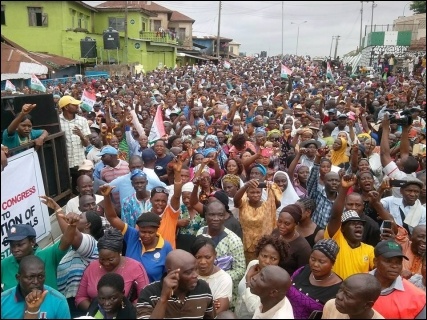 It was an atmosphere filled with suspicion and apprehension when in the early hours of Friday, 17th June, 2016 as thousands of striking workers of Oyo State who gathered as usual at the state secretariat of Nigeria Labour Congress (NLC), were waiting for the Labour leaders for the report of the meeting held with the state government the previous day.

The invitation for the meeting came on Tuesday June 14 at the peak of the preparation for June 15 mega rally led by the national leaders of both the NLC and Nigeria Union of Teachers (NUT) to further deepen the struggle against the plan to privatise some public schools as well as non-payment of salaries and pensions in the state. This was a deliberate ploy by the state government to prevent the mega rally which later successfully grounded the entire city of Ibadan from taking place.

Despite all forms of efforts and pressures by the state government the Labour leaders commendably still went ahead to organise the rally which was very massive as thousands of workers, including the market women and men, trooped out in their numbers to support the agitation against the planned privatisation of schools and non-payment of salary and pension arrears in the state. The struggle that started at the beginning of June has not lost momentum.

It was after the rally that a delegation of labour leaders led by the National Deputy President of NLC met with the state government. The labour leaders could not but to take the outcome of the meeting to a congress of workers in the state for consideration and discussion as a basis to arrive at a decision that will be collectively acceptable to the rank and file workers in the state.

At the congress, it was reported that the Governor who led the government delegation only agreed to withdraw all the trumped-up charges levelled against the arrested labour leaders which is just one of the three demands presented in the meeting by the labour side. There was no agreement over the other two demands which include: immediate payment of all the 6 months’ salary and pension arrears and discontinuation of the process to privatise some public secondary schools in the state.

The labour leaders even reported that all their efforts to persuade the state government to pay at least two of the six month salary arrears proved abortive as the Governor insisted that his government has no money to even pay a week’s salary let alone two months to the poor civil servants in the state. Concerning the plan to privatise schools, the government reluctantly agreed to set-up a 14-man committee that will comprise 7 persons from labour side and another 7 persons from government side to review the planned policy. This is with a caveat that no single step taken so far over the planned privatisation of schools by state government will be continued. This should be considered as a victory by workers because without their mass action and resistance the government would have gone ahead to sell off the public schools

Remarkably, after so much discussion and consideration of the outcome of the meeting, the congress did not waste any time to arrive at an overwhelming decision that the strike should continue while insisting on “no pay no work” until the government is ready to pay at least two of the 6 months’ salary arrears.

Also suggested at the congress is need to set up a committee of workers that will immediately commence the task of verifying the authentic number of workforce in the state as well as the real proportion of the wage bill originally taken by the civil servants in the state. Workers were directed to continue to converge at the state secretariat of NLC three times in a week (Monday, Wednesday and Friday). Good enough, since then workers have been coming on the specified days as usual in huge numbers.

Since the decision by Oyo Workers to continue the strike, Abiola Ajimobi/APC government has not only refused to withdraw the trumped-up charges levelled against the labour leaders at a magistrate court but also instituted a fresh case at the National Industrial Court, NLC challenging the legality of the three week old strike.

The striking workers however seized this as an opportunity to further popularise the struggle and press home their demands as hundreds of them were in both courts on Thursday 22nd and Friday 23rd of June when the respective case came up. The next adjournment dates are 12th and 19th of July at the magistrate court and industrial court respectively. 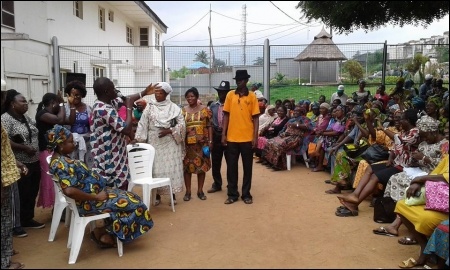 Workers stage drama to entertain themselves during one of the mass meetings at the NLC Secretariat. – photo DSM   (Click to enlarge)

The government has also been busy wasting the allegedly non-sufficient state money mobilising thugs and his party members across the 33 local governments within the state to stage a rally against the striking workers in the state. This was to give a false impression that the general public are in support of its anti-people policy of privatising school under the guise of public private partnership, PPP.

Despite all these antics as well as propaganda by the Ajimobi-led government and its apologists, the general public has continued to lend support and solidarity to the struggle of the workers. Reflecting this was the way and manner some of the Ajimobi-led government’s sponsored and rented crowd who staged a rally tagged “Stand with Ajimobi” on Monday, 20th June were booed and stoned along Beere and Oje markets in Ibadan by market women and children

Labour must to mobilise support throughout Oyo

Worthy to note is the fact that majority of this rented crowd were mobilised from outside Ibadan and its metropolis. These places like Ogbomosho, Iseyin, Igbora Saki are areas where NLC is yet to organise a single and thorough sensitization rally like the many it has organised within Ibadan in the recent time. This is why we of DSM are of the opinion that, there is an urgent need for the leadership of NLC to start taking seriously the possibility of organising rallies in as many as possible of the strategic towns across the state. This kind of rally would, no doubt, go a long way to sensitise the people outside Ibadan about the dangers in the planned privatisation of schools and support for the struggle against this plan.

Another immediate task necessary to be undertaken by the labour leaders in the immediate period is the need for a press conference to start a campaign to win more public support. This will help to dispel some of the lies recently being peddled around by the state government with a view to further appeal for more support and sympathy among the general public in order to prevail on the state government to stop chasing shadow but accede to an immediate demand of the striking workers to be paid for the work they have already down and for pensioners to receive their pensions. Such a campaign should involve the striking workers and protesting pensioners in activity and would also serve to weaken the existing pool individuals available for recruitment as strike-breaking forces.

The ongoing struggle Oyo Workers has once again demonstrated how prepared and ready the working people will always be to fight and resist any attack on either their living or working condition should they are provided with a courageous leadership at the head of their struggle. So far the labour leaders have been steadfast, however workers must continue to insist that congress must be called before any decision or next steps in the struggle are taken.