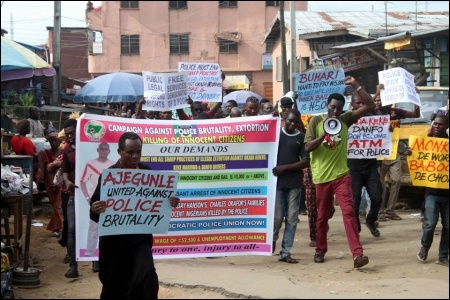 Protesters march in the community, photo DSM   (Click to enlarge)

On Tuesday March 22nd 2016, commercial motorcyclists popularly called okada riders together with activists, socialists and residents of Ajegunle community in Lagos held a protest march against police brutality and extortion. The protest was organized by the Campaign Against Police Brutality, Extortion and Killing of Innocent Citizens (CAPBEKIC).

CAPBEKIC is a coalition of okada riders associations as well as groups like the DSM, AICOM, JUSTICE GROUP set up in the aftermath of the death of an okada rider, Saturday Hanson, after he was knocked down on Febuary 29, 2016 by a bus filled with policemen out on an illegal mission to extort ordinary people. The immediate aim of the coalition is to protest this gruesome death but also to raise the crucial issues of unlawful harassment, extortion and killing of people by the police.

The protesters were armed with placards bearing different inscriptions like (i) okada, keke and danfo don become ATM machine for police. (ii) Stop the incessant killing of innocent citizens. (iii) FG must compensate the family of Saturday Hanson, Charles Okafor. (iv) Minimum wage of N52, 500 should be paid to the police and all workers. (v) For a democratic Police union.

The protest kicked off with solidarity songs. But just before the march began, Dagga Tolar (member of DSM NEC and Chairman of Ajeromi Ifelodin NUT) addressed the protests about the method and strategy as a guide for the protest to be successful. According to him, the importance of the protest march was to register our opposition to the police extortion, brutality and killing. Also, a general appeal was made by leaders of CAPBEKIC that participating okada riders in the struggle should not disrupt or forcefully mobilize any riders to join the protest. 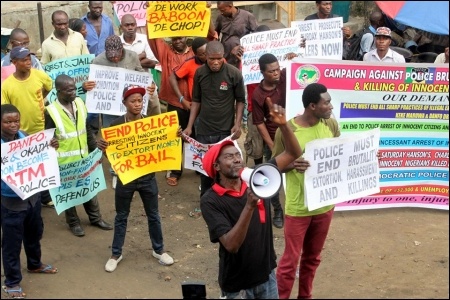 Dagga Tolar also commended the okada riders for turning out for the peaceful protest despite the fact that the police had tried to demoralize members through their union leaders. A day before the protest, the secretary of CAPBEKIC and DSM member, comrade Moshood Oshunfurewa, was arrested and briefly detained by the police. The aim was to use this to derail the action the next day. It took a flash campaign which involved bombarding the phone lines of the police authorities with calls and text messages by comrades and sympathizers in Nigeria and overseas for Moshood to be released. The authorities even went to the extent of using the tactics of “divide and rule” to psychologically influence the struggle through the feudal lords (Seriki, Bale), still ordinary working people were able to mobilize themselves to come for the protest. For instance, it has now emerged after the protest that one of the okada riders who has been active in mobilizing the Hausa community was equally picked on the morning of the protest so he would not be able to mobilize. According to Dagga Tolar, that despite all of these the protesters still turned out is significant. 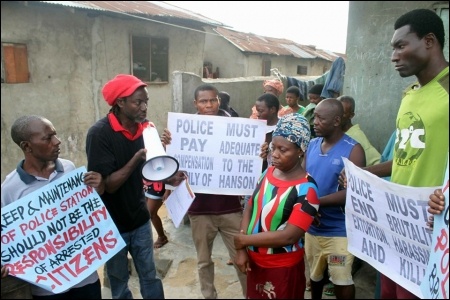 At about exactly 8:30am, the protest march began with leaders of CAPBEKIC, okada riders, members of the community moving en masse to the house of late Saturday Hanson to console with the family. When the protesters arrived, residents of the community who one way or the other had suffered in the hands of police through harassment, extortion or illegal raid, all came out in their numbers to sympathize with the deceased family and show solidarity to the struggle. Immediately the news got to the widow, Mrs. Hanson, in her room where she resides alongside with her five children, came weeping and once she looked at the banner that carried her late husband’s picture and those killed by the Nigeria policemen, the tears in her eyes dropped profusely. It was at this point that some leaders of CAPBEKIC had to take her in to console her and she later came out to listen to the address made by comrade Dagga, and prayer was led by Mr. Israel Eke. A copy of the petition which the protesters were going to submit to the police was also handed over to Mrs. Hanson.

With this, the protest moved along the densely populated streets with placards and chanting solidarity songs while the banners were boldly displayed. The solidarity songs became an attraction including the banner to residents in the communities who were asking questions about what was going on concerning the protest as protesters were marching down to the Ifelodun LCDA government. Marching through the streets in Mosafejo-Amukoko areas, some of the print and electronic press correspondents like the Commoners, the Sun, Guardian newspaper, Galaxy and Lagos television marched with the protesters.

Youth and activists who marched together from the kickoff point of the protest went to the onlookers to explain the significance of the protest to them and the need in their respective communities why they should not hesitate to join and also begin to mobilize themselves peacefully against police brutality and extortion. Members of the Democratic Socialist Movement (DSM) and sympathizers who were in the protest took it upon themselves to thoroughly canvass people to buy the latest, April/May edition, of the DSM’s publication Socialist Democracy (SD); making people to see the reason why this publication represent their interest as oppressed working people. At the end of the protest, about 30 copies of SD were sold. 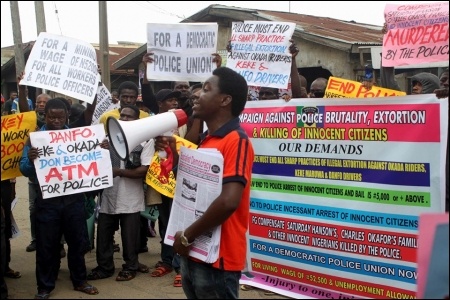 At the Ifelodun LCDA Secretariat, leaders of CAPBEKIC addressed the protesters and the entire residents in that community on what this struggle significantly mean to the working masses of Ajegunle. After a brief introduction by Moshood Oshunferuwa, Comrade H.T Soweto (Education Rights Campaign National Coordinator) gave a speech on why the killing of Saturday Hanson by Ajeromi police men was barbaric. In his speech in the front the LCDA secretariat, he demanded that the government must see to the need of the deceased family especially the education of the five children Saturday Hanson left behind. He linked the incessant police extortion and brutality to the poor conditions which the police rank and file is subjected to as well as the lack of democracy. He called for improvement in the pay and conditions of the police rank and file as well as recognition of police officers’ right to unionization.

Immediately after the speech, some leaders of CAPBEKIC and DSM members went inside the LCDA Secretariat to deliver the petition to the representative of the Executive Secretary (ES). The petition contains all the demands of CAPBEKIC and why residents, okada riders and the oppressed masses are opposed and dissatisfied with extortion and illegal raid by the police and government negligence on the matter. At the Ajeromi local government a lot of okada riders joined in the protest as they trouped into the council in their numbers with their bikes parked outside as directed by the leaders of CAPBEKIC.

Addressing the masses, Dagga narrated how Saturday Hanson was killed, the extortion going on in the community, and also made an appeal to the representative of the Executive Secretary (ES) that the LCDA should try to offer assistance to the widow and the five children that Late Hanson left behind.

After this, the protesters marched down to Area B police command. At the Area B police command, the gate was locked against the peaceful protesters apparently in anticipation of violence given the seething anger against the police killings. But the organized and coordinated movement of the rally/protest never recorded any form of violence in the whole 6 hours of the action. It was all solidarity songs, displaying of banners and placards bearing different slogans and demands against the harassment, brutalization and killing of innocent working class people and youth.

For the 30 minutes spent at the front gate of Area B police station, neither the Area Commander nor his representative came to address the okada riders, journalists, reporters waiting to hear from the authority. It was after much pressure from the unrelenting protesters chanting solidarity songs that some representatives of CAPBEKIC were allowed to go in to submit the petition. After this had been done, leaders of CAPBEKIC addressed the okada riders on the way forward for the struggle.

Back at the kickoff venue of the protest, a fighting fund of N1, 800:00 was raised among the okada riders to support the struggle and a brief meeting was reached upon with a collective resolution that later a general meeting should be held to review the protest, draw out lessons and plan ahead new method and strategy to sustain the struggle.