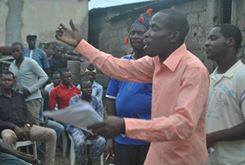 Comrade Moshood Oshunfunrewa, a leading member of Democratic Socialist Movement (DSM) in Ajegunle, Lagos, was arrested this afternoon (March 21) by the police over the protest being fixed for tomorrow against police killings, brutality and extortion in Ajegunle. He is presently detained at Ajeromi Police Station.

UPDATE: Moshood was released late in the evening of March 21. Thanks to all those who protested at his arrest.

The protest is being organized by the Campaign against Police Brutality, Extortion and Killing of Innocent Citizens which has DSM, community groups, associations of commercial motorcycle operators (okada riders) and others in the community as members.

The death of Saturday Hanson, an Okada rider, who was knocked down on February 29, 2016 while the police was chasing a commercial bus (danfo) driver whom they wanted to extort in their usual practice, provoked the campaign and planned protest. Saturday Hanson died on March 9, 2016

Please send protest text or call the Lagos State Commissioner of Police Fatai Owoseni on 08033041393 and Division Police Officer (DPO) Ajeromi Police Station 08037874871 to demand the immediate and unconditional release of Moshood Oshunfunrewa, arrest and prosecution of police officers responsible for the death of Saturday Hanson, compensation for the families of Saturday Hanson and other victims of police brutality, respect for freedom of association and right to protest and an end to police brutality and extortion in Ajegunle and elsewhere in Lagos.

You can also call the following numbers provided by the Lagos state police command which according to it, “have been approved and released to the members of the public who may need the services of the police or make any complaint that will assist in nipping in the bud any act of misconduct regarding any policeman in Lagos State.”