NIGERIA’S MESS: CAN BUHARI CLEAN IT UP?

The Lagos State Chapter of the Democratic Socialist Movement (DSM) held an end of year public meeting which brought together new contacts and supporters encountered in workplace interventions, students’ movement activities and community campaigns. The meeting was held at a period when an avalanche of neo-liberal attacks such as the electricity tariff hike and imposition of tolls on the highway is expected.

A significant feature of the meeting was the presence of four workers from International Paints of West Africa (IPWA). Also in attendance was a member of our newly opened branch at the Lagos State University (LASU).

In his lead-off on the topic for the political discussion, Nigeria’s Mess: Can Buhari clean it up?, Lanre Arogundade noted the role that the mass of working people have played right from the days of the anti-military struggle, which was also shown partly at the last general elections in May, 2015 where the Jonathan-led regime was ousted. 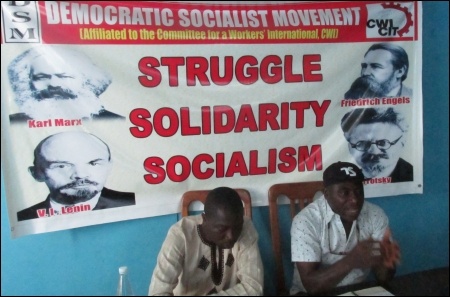 He stated that despite the groundswell of momentum that the 2015 general elections generated, by official record, there was low mass participation compared to 2003, 2007 and 2011 elections. However, given the mass illusion in Muhammadu Buhari as a presidential candidate, the outcome of 2015 general elections apparently staved off a possible mass revolt from below. This is against the background of the monumental failure of the successive governments despite huge resources at their disposal since the return of civil rule in 1999.

He noted that the 2012 mass uprising against attempts to withdraw fuel subsidy represented a glimpse of a pan-Nigerian working people’s political mass movement that is needed to carry out social revolution in Nigeria. He argued that if there was in existence a working people-oriented workers party standing on a clear socialist programme, it could have swelled in numbers during and after the 2012 mass uprising and could have possibly won the 2015 general elections. He stated that the misnamed Labour Party could not provide the much-needed political and electoral vehicle for working people-oriented regime change and this afforded a section of the ruling class to forge an alliance through the All Progressives’ Congress (APC) and take power from an incumbent for the first time in the history of Nigeria.

He pointed out that the anti-corruption trials being conducted currently under the Buhari-led regime were similar to that waged by previous regimes including that of Obasanjo. He said it is not ruled out that those in power now would face similar allegations of corruption because, at the root of it, is the capitalist system that enables a minority few to own and control the society’s collective wealth. “If monies are not being spent on massive public programmers of health, education, roads etc., they would be stolen”, he argued. According to him, this is exemplified by the report of the United Nations that 70 percent of Nigerians live below $1.25 per day, which approximately going by the population statistics will be about 100 million people. Yet, Aliko Dangote, a Nigerian businessman is listed by Forbes magazine as being among 25 richest billionaires in the world and the richest man in Africa. He explained that socialists are however not opposed to the trial of anyone who has looted public treasury, but said only the working people’s democratic ownership, control and management of society’s resources can halt the trend of public resources being freely stolen.

He also stated that the solutions being proffered by spokespersons of the regime to the myriad of crisis facing the working people have been neo-liberal agenda. He referred to the statements credited to Babatunde Fashola, the Minister of Works, Power and Housing, that they intend to increase the electricity tariff to guarantee electricity supply and impose toll gates to guarantee functional roads among others.

He hinted that the warped system of capitalist political governance in Nigeria allows the Governors to have security votes – an undefined and unaccountable amount of money expended for so-called security needs and personal luxury. He noted that the current wave of ethnic nationalist agitations such as the clamour for Biafra is fundamentally part of the vicious cycle of unresolved national questions. He cited the examples of the phenomenon of the Oodua People’s Congress which followed the cancellation of the June 12, 1993 elections which was won by a Yoruba business mogul, Moshood Abiola and the Niger Delta militancy which trailed the emergence of Olusegun Obasanjo in 1999.

He submitted that the fundamental challenge is to build a genuine working people’s political alternative. He argued that this explains why the Democratic Socialist Movement alongside like-minded forces have initiated the formation and building of Socialist Party of Nigeria and is currently battling for its registration in court.

In their comments, Chinedu Bosah, Soweto, Pelad and Segun Sango corroborated the positions laid in the lead-off by Lanre Arogundade and submitted that nothing has fundamentally changed since the “change” regime has been in power. They underscored the looming attacks on the living conditions of the working masses specifically through the 3-year wage freeze which has been imposed through its inclusion in the Medium Term Expenditure Framework (MTEF) recently approved in the National Assembly. They raised the need to place the challenge on the leadership of the labour movement to raise fresh demands for minimum wage increase and that given past experience of labour’s inaction and compromise, activists must prepare to intervene among the rank and file workers to build the mass resistance where the labour leaders abdicate.

The meeting went on to take an update on the court matter of the Socialist Party of Nigeria for its registration by the Independent National Electoral Commission. Chinedu Bosah, the National Secretary of the Socialist Party of Nigeria, stated that the matter came up on December 17, 2015 at the Federal High Court, Abuja and it was slated for definite hearing or report of an out-of-court settlement. He reported that the court did not sit as the Registrar of the court reported that the Judge was ill and the 25th of January, 2016 was picked as the new date.

Giving an overview of the state of the DSM, Ayo Ademiluyi reported that the public meeting is the last of the series of meetings organised by the Lagos State Chapter of the Socialist Party of Nigeria and Democratic Socialist Movement. He hinted that more of such is underway in the New Year. He urged the new contacts attending the meeting to buy and read available organisational publications such as the current issue of the Socialist Democracy paper, the pamphlet on fuel scarcity and the publication on DSM and the Struggle for a Genuine Working People’s Political Alternative in order to absorb the core ideas and perspectives of the organisation.

Pelad, in his introduction on finance, reminded comrades to redeem their pledges for the production of the Socialist Democracy and other publications, as well as SPN work especially the ongoing SPN court matter appearances. He raised the need for comrades to set as part of their New Year Resolutions the resolution to pay their subscriptions regularly. He also hinted that the plan is underway to produce a new DSM perspective document in 2016. Fighting funds was taken by Tanko Bashir, the National Treasurer of the Socialist Party of Nigeria, and a sum of N7, 000 was collected. 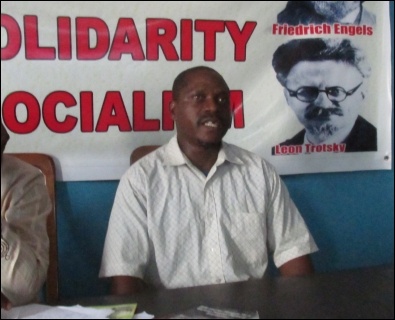 An update on the workplace struggle at International Paints of West Africa (IPWA), Apapa, was taken and Mr. Isiaka Oyeniran, the former Chairman of the factory branch of National Union of Chemical, Footwear, Rubber, Leather and Non-Metallic Employees (NUCFRLANMPE), addressed the meeting. He stated that the demand of their struggle is for payment of three months’ unpaid salaries as well as remittance of pension contributions among others. He narrated how the current management of the company led by Engineer Tella has run aground the company. He hinted that workers are discussing how to take the struggle forward. In his comments on the update, Segun Sango raised the need for the workers to organise well-planned mass public protests with proper media coverage in order to give the struggle its much-needed publicity. Chinedu, Pelad and Ayo had a brief meeting with the IPWA workers after the program to discuss the struggle in detail as well as projecting on how to take the struggle forward.

The meeting ended on a note of fresh confidence among both the new members of the organisation and the old layer that the coming period offers new opportunities with growing layer of workers, students and youth searching for a genuine way out of the crisis of capitalism has foisted on the mass of the working people.