A Call for Solidarity Actions

Workers Shut down CRIN Ibadan in Protest against Anti-Worker Management 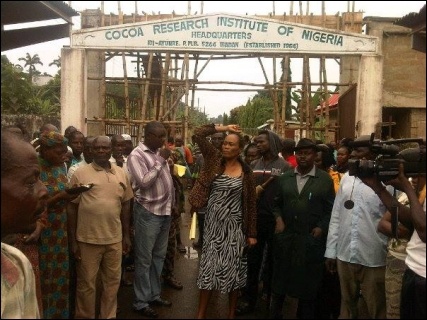 Workers of the Cocoa Research Institute of Nigeria, CRIN Ibadan since Monday, 2nd November, 2015 have picketed and barricaded the institute in protest against attacks which the Prof. Malacky Akoroda-led administration has unleashed on their democratic rights as well as living and working conditions since its inception in 2012. It is significant to state that the protest, which has paralysed all activities in the institute, has enjoyed active participation of the members of the host community in solidarity with workers.

Back in 2013, 95 workers of the institute were arbitrarily sacked in one fell swoop for participating in an industrial action declared by national leaderships of the three trade unions in the institute. Then, the workers were forced to embark on the strike when it was obvious that the institute was no longer safe for workers following the disruption of their peaceful congress on October 23, 2013 by armed thugs believed to have been hired by Francis Fadanhunsi, the then Chairman of the Governing Board of the institute.

Following this brutal attack which left many innocent workers injured, Fadahunsi also proscribed the three existing staff unions in the institute. Unfortunately, in the absence of organised resistance in form of sustained consistence political agitation by the national leadership of the local trade unions to challenge the purported proscription, the mass sack as well as other attacks on democratic rights of workers in the institute, Prof Akoroda got more emboldened and draconian. This is so much so that CRIN is now more or less like a banana republic where workers could be given query for not greeting the Director! Nigeria Security and Civil Defence Corps (NSCDC) officers who are permanently stationed in the institute slap and beat workers with impunity.

Workers made to sit exams 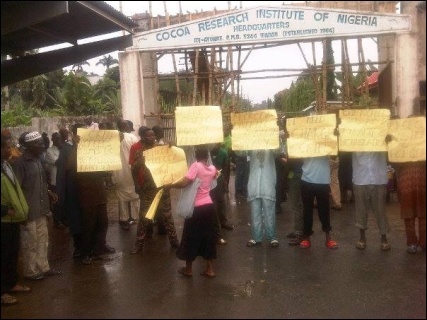 The criteria for promotion of workers were deliberately configured in such an awkward manner to sack junior staffs and deny senior staffs that are antagonistic to the misrule of Prof. Akoroda-led administration of promotion. Take for instance; academic staffs like scientists who are usually promoted based on the number of their publications in both international and local journals are often compelled to undertake the rigor of a written examination. That many of these scientists were denied of promotion despite their excellent performance in the so- called promotion examination gives credence to fact that the examination was conducted in the first instance on an expectation that the scientist will fail, hence a formal ground to legitimatise the interior motive to deny them of promotion.

Worse hit amongst the CRIN workers are the junior staffs. These are the category of workers who are mostly artisans, cleaners, gardeners, night guards among others. It so preposterous that many of these junior staffs who are largely employed with either a certificate of trade test or primary school certificate are usually subjected to write promotion examination which include advanced questions on subject areas like physics, chemistry, biology etc. This is at variance with the necessary provision in the public civil rules, in which the promotion examination is expected to be a test of additional knowledge or experience workers are expected to acquire during training, conferences and seminal they are supposed to be encouraged or sponsored to attend in the course of their job.

Given this background it becomes extremely impossible for many junior workers to pass such examinations. This explains why many junior staffs in the institute have failed the promotion examination two times. The implication of this is that they are already at the verge of losing their job owing to the new decree by Prof. Akoroda that any workers that fail the promotion examination three times will be sacked automatically.

The main gate of the institute was locked-up; the entire entrance is blocked with heaps of sand and timber, therefore makes it impossible for Prof. Akoroda and other management staff to gain access into the institute. The ploy by the security agencies like police, Civil Defence Corps and Department of State Security, DSS, to force the gate open in the night was defeated as over 200 people, comprising workers and as well as members of the host community, have been sleeping at the gate of the institute since the mass protest was triggered.

Different meetings were facilitated by representative of security agencies. All in an attempt to confuse distract and disorientate the protesting workers with a view to weaken their collective resolution and determination. Notably among these meeting was the one facilitated by the Oyo State Commissioner of Police (CP) on the Friday 6th November where he threatened the representative of the protesting workers among other things of arrest should they fail to end the protest and remove all barricade at the entrance of the institute on or before Monday, 9th November.

This threat met with the stiff opposition of the protesting workers who were not deterred or intimidated but rather got strengthened as they commenced immediate mobilisation among workers and members of the host communities who were yet to actively join the struggle at the receipt of the report threat issued by the CP. A press statement was issued immediately condemning the decision of the CP while a press conference was also scheduled to hold on the same Monday the CP threatened to carry out his brutal repression of the protest.

It is at the point of addressing the press conference that hundreds of armed police arrived with a loader to remove the barricades. The female workers in their determination to resist their plan of the armed police to repress the protest went half naked, wearing only bras and underwear skirts while their male counterparts lined up at the entrance holding placards with different inscriptions as they were chanting anti- management songs.

After several hours of demonstration of courage and determination which was massively covered by both electronic and print media, the CP was shamefully forced to withdraw his men. This defeat of the CP’s attempt to crush protest with brute force is indeed a partial victory which has further emboldened the protesting workers. As a result, the workers have stepped up their demands to include the immediate sack of Prof. Akoroda as the Executive Director of the institute.

This is in addition to the demand for immediate reinstatement of the 95 sacked workers and lifting of the ban on union activities in the institute. As we compile this report, workers agitation and occupation of the institute still continues while the barricade at the entrance remains intact. Thousands of leaflets itemizing various points “WHY AKORODA MUST GO” have been produced and distributed to further build the support and solidarity of the general public towards the struggle. 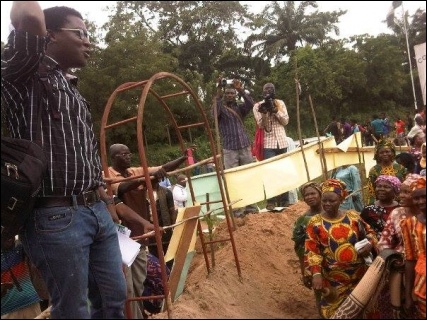 The leadership of the protesting workers has also resolved to organise a public symposium on the 19th November to further build more publicity and support for the struggle. This proposed public symposium is in agreement with the suggestion made by the Comrade Abbey Trotsky, the Oyo State Coordinator of the Campaign for Democratic and Workers’ Right (CDWR), a campaign platform of Democratic Socialist Movement (DSM), while addressing the rally of the workers on the ways to sustain and defend the gains archived so far.

We call on NLC, TUC and other trade unions as well as pro-masses organisations, pro-labour activists and socialists locally and internationally to support the on-going CRIN struggle. This could be done by issuing public solidarity statements as well as sending protest letters and text messages demanding the unconditional reinstatement of the sacked 95 workers; lift of ban on union activities, respect for dignity of labour, and immediate end to administrative tyranny in the institute to the following phone numbers and e-mails: