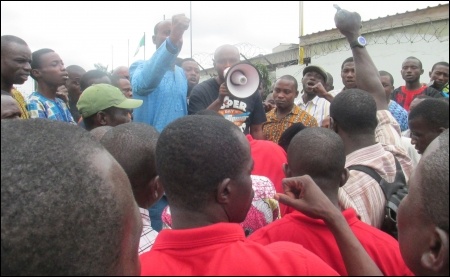 The picketing of La Casera, an Indian owned company, that started on September 11, 2015, was led by the National Union of Food, Beverage, Tobacco employees (NUFBTE) and the doggedness of the workers has forced the management to reach an agreement on the September 29th 2015 with the union and workers. The management had shut down the company and sacked workers who had resolved to take no more the denial of their right to freedom of expression and to belong to a union of their choice. And the agreement won after the struggle that lasted over two weeks entailed that the management would recall all sacked workers, and allow workers to join the union; hence, the workers resumed on September 30. This shows clearly that the struggle of unionization and decent work can actually be won if the unions embark on sustained campaigns and mobilization to confront all erring management.

The management had no choice than to reach an agreement with the union when all its tactics failed. After the management sacked the workers, it called on them to collect their pay-off, but only a few workers visited the head office only to find out that the so-called pay off was just one month salary in lieu. This further angered theworkers to return to the barricade. Some of these workers thought that having worked for several years, management would be ready to offer tangible gratuity. The attempt to pay workers one month’s salary and locking out workers for more than two weeks was not enough to break their resolve as workers stood their ground. Though NUFBTE leaders at the national and state levels rejected the proposals, which highlighted steps to maintain campaigning and mass actions, put forward by the Campaign for Democratic and Workers ‘Rights (CDWR) on how to sustain the struggle, the CDWR was able to send representation to address workers in solidarity on two occasions and issued a press a statement. NUFBTE, like other trade unions at this moment, does not want a confrontation with management but only looks to a peaceful and diplomatic resolution, a policy which sometimes fails.

La Casera Company Plc, which produces La Casera soft drink and other consumables, was established in 2001 by Mahinda Vaswani. The struggle of workers to organize to join a trade union dates back to 2002, and all along the management has blocked all attempts of workers to join a union. This led to a 29-day strike action embarked by the workers in 2004 which failed to achieve result because of treachery of some of the trade union leaders.

The July 31, 2015 sack of the branch chairman (Mr. Richard Jome) who was installed by the union and the refusal to recognize the union led to this year’s picketing. After the picketing, workers attempted to resume work on Monday September 14, 2015, only to be locked out. The management did not only lock the gate against workers, it also released a memo that all workers had been disengaged!

The La Casera management is conscious of the fact that when workers become organized and responsive, some of the anti-labour practices, if not all, could be resisted. Despite the huge patronage enjoyed in Nigeria which has made La Casera products a top brand with huge profits accruing to it, over 40% of the entire workforce are casuals. Indeed, some of them have worked for 8 years as casuals in violation of the Labour Act that stipulates that the employment of workers who have worked in a company for 3 months must be regularized.

The Ministry of Labour and Productivity has always allowed employers of labour to violate many labour laws and perpetuate anti-labour practices. At the same time the labour unions have failed to challenge anti-labour companies and their managements. However, on a few occasions unions fight, it is primarily to get workers unionized for the sake of union dues that will accrue to them. It explains why workers in many factories suffer indecent work practices and earn as low as N12,000 monthly salary, less than the poverty minimum wage of N18,000, despite belonging to a union.

The CDWR calls on the trade unions to commence a mobilization to struggle for not just unionization but also for decent work, living wage and better conditions of service.