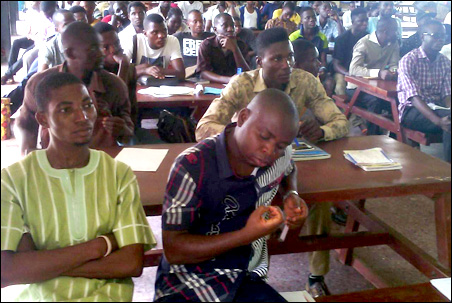 The Education Rights Campaign (ERC), OAU Branch hosted the ERC National Symposium on Thursday 20th August, 2015 with the theme: ”Buhari Presidency: A New Dawn for the Education Sector?”. The symposium was not only thought-provoking but also educative.

The ERC is a platform formed by the DSM since 2004 to campaign against neo-liberal and anti-poor education policies. Especially against the background of the ideological collapse of the National Association of Nigerian Students (NANS), the ERC has led campaigns for improved funding of education and the provision of a free, quality and democratically-managed education sector. 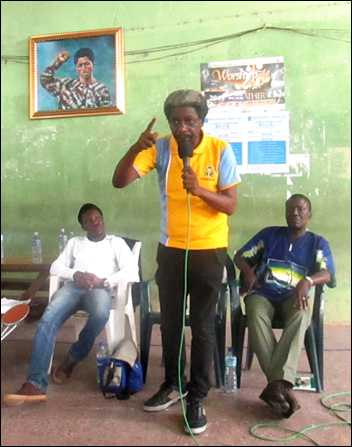 Various speakers and activists analysed the importance of education in the society. All the speakers unanimously agreed that the Buhari Presidency will definitely continue to unleash more attacks on public education in Nigeria if the various unions do not rise to forestall such a situation. This is especially because of the on-going economic crisis manifested in the sharp decline in government revenue as a result of crash in crude oil price â€“ Nigeria’s chief export. It was the unanimous opinion of speakers as well as participants at the symposium that education is a tool for social change. Therefore unions must be prepared to organise struggles to oppose any possible austerity measures that the new government might introduce.

While delivering his speech, the NASU Chairman, Wole Odewumi stressed that education should be the top priority of any government. He stressed that education has not been properly funded by previous governments and the little funds are lost to unnecessary bureaucracy, which H.T Soweto later referred to as ‘principalities and powers’. H.T Soweto, the National Coordinator of ERC, was of the position that any government that invests in education is building the future of the nation.

The problems encountered by the education sector were discussed by various speakers at length. The major problems of the education sector in this country mentioned by various speakers include the poor funding of education. It was pointed out that the education sector is been funded with about 8% – 10% of the nation’s yearly budget instead of the 26% minimum that was authorised by UNESCO. It was also mentioned that during the first and second republics, public education was funded with about 40% of the nation’s yearly budget which resulted in the free education that was obtainable in those days. But that was a different historical period for capitalism. Firstly the capitalist world then enjoyed decades of economic growth. Secondly the development of the former Soviet Union and Eastern Europe, countries then having planned economies but not workers’ democracy, were able for a time to show how formerly ‘backward’ countries could develop. Against a background of rivalries between two competing systems these developments provided both pressures on and opportunities for a few African leaders, including Chief Obafemi Awolowo (leader of the Action Group and then of the Unity Party of Nigeria), to pursue a “welfarist” economic direction (a sort of mixed economy). This saw the state playing a bigger role in the economy through investment in public infrastructures and social services like education and healthcare. 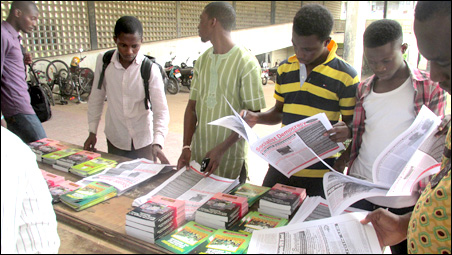 But this form of massive state investment in social services and the economy is impossible on the same scale and sustained level for neo-colonial capitalism today. With the on-going economic crisis which has seen crude oil price crash by more that 40 per cent, any capitalist government including Buhari government has little elbow room to make any significant, lasting reforms not to talk of change.

The speakers also expressed their anger on the issue of poor management and corruption, it was stated that one of the problems responsible for the backwardness of education is the mismanagement of the little funds allocated to the education sector by various parasites in the system. H.T Soweto and Prof. Sola Olorunyomi were of the opinion that the major problem affecting the education sector and other sectors in this nation is the current capitalist system practised in the state which gives way to parasites and corrupt personnel to mismanage the nation’s fund. They also said that without the overthrow of the current capitalist system, it will be difficult for the education sector to function well, as the stakeholders who own different private universities across the country will never allow education to be free and be of good quality.

Prof. Sola Olorunyomi also spoke against fee hike and admonished students to continue to wage a relentless war against it because it is anti-students and anti-masses. He also stated that education is a right to be enjoyed by all and not a privilege for the few.

H.T Soweto, the National Coordinator of the Education Rights Campaign stressed the need for a socialist Nigeria as the only alternative to eliminate the various problems in the country. He also mentioned that Nigeria is one of the most backward countries in Africa considering the enormous resources at her disposal and also the man-power in terms of its population. Prof. Olorunyomi from University of Ibadan explained that the position of ASUU in this present administration led by President Buhari is for a total restructure of the education sector and not mere reforms. He also expressed the need for students to fight against hike in fees.

Without any iota of doubt, the population at this symposium, which increased geometrically as the programme progressed and the quality of questions asked reflected the fact that the ideas of socialism were well received. Copies of the DSM paper Socialist Democracy, the DSM pamphlet Perennial Fuel Shortages and the DSM Publication Struggle and Socialism were sold at the venue and two students joined the OAU branch of DSM as immediate fruits of the programme.