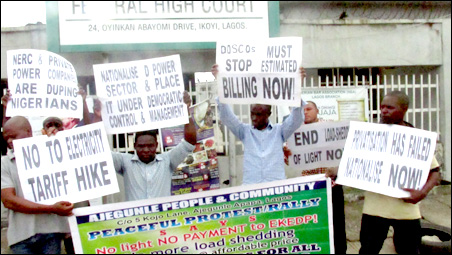 About 20 demonstrators, including members of the Democratic Socialist Movement (DSM) and activists from different communities in Lagos, held a protest action against the planned increase in electricity tariff on Thursday July 9, 2015.

The protest took place at the Federal High Court Ikoyi Lagos where the suit filed by a human rights lawyer, Toluwani Adebiyi, seeking to stop the planned hike in electricity tariff by the Nigerian Electricity Regulatory Commission (NERC) and the private electricity Distribution Companies (disco’s) came for hearing.

The protesters came from the Aboru-Akinola, Ago Palace, Ajegunle and Agege areas of Lagos. 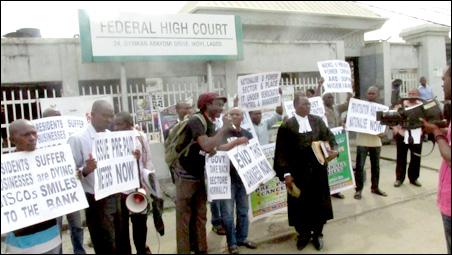 Since May 28, 2015, Mr. Adebiyi has secured a court injunction through an ex-parte motion which stopped the NERC and DISCOs from going ahead to hike electricity tariff which had been planned to take effect from June 1 2015. With this injunction, which has been reaffirmed twice at the subsequent court sittings on June 11 and July 9, the NERC cannot hike electricity tariff until the substantive suit is decided.

The matter has been further adjourned to July 21. Members of DSM and other activists have planned to return to the court premises with the protest action at the next adjourned date.

The members of the DSM have joined other activists in the campaigns against exploitation and poor service by the private electricity firms since the struggles first broke out in many communities in Lagos.