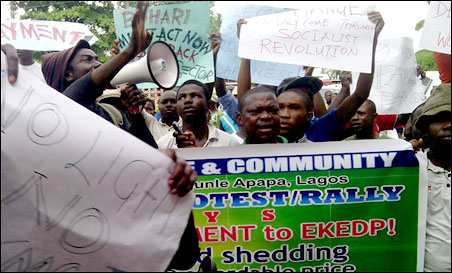 June 4th saw residents of Aiyetoro community in Ajegunle, Lagos, under the aegis of Ajegunle People and Community Movement, stage a protest rally to the EKEDP (Eko Electricity Distribution Company) office, Zeek Plaza, Apapa, against poor electricity supply and rapacious exploitation of consumers through estimated/crazy billing by the distribution company.

The rally took-off from NUD Primary School, Arumoh Street, with protesters carrying placards of various inscriptions, and moved through Layinka, Barra Street, Bale-Aiyetoro, Okoya, to Bale Road where it stopped at the EKEDP marketing unit to register the frustration of the community. 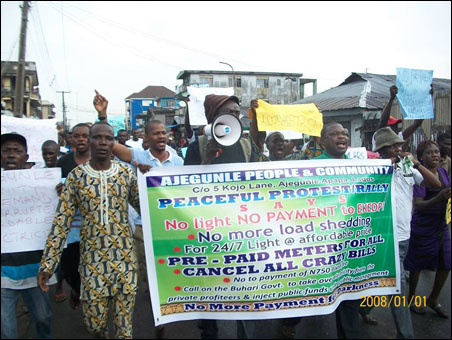 Protesers on the march – photo DSM

From there it moved to the local government secretariat and next to the Police Station adjacent to it, before moving to Boundary Roundabout, from where it headed straight to the distribution company (disco) district office at Apapa that oversees Aiyetoro.

About 100 people including youths, men and women participated at the protest march. Dagga Tolar, a leading member of the Democratic Socialist Movement (DSM), was the main speaker at the protest/rally.

The protest was staged due to the anger felt by the residents for being made to pay exorbitant bills despite epileptic electricity supply to the community. This is not different from the situation in other parts of the country. This much was corroborated by the head of EKEDP Apapa distribution unit, Adeola M. J, who said that there was nothing the disco could do about the situation given the failure of the government and the generation companies to generate enough megawatts of electricity. 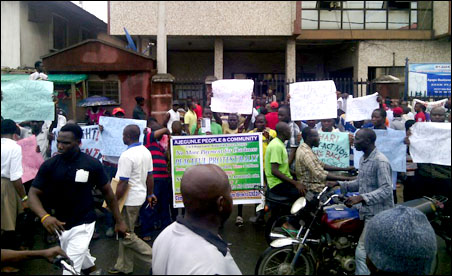 What then is the rationale behind the increment in electricity tariff, which has been hiked three times since the privatization, and the heavy bills consumers have been paying for service not enjoyed?

This informed the slogan and chanting on the lips of protesters: “NO light, No payment!’ and “No payment, No disconnection!” Some samples of last month (May) bills were collectively returned to the EKEDP by the community.

The members of DSM who played active role in organizing the protest circulated over one thousand copies of “NO light, No payment” campaign leaflet and sold two copies of the DSM’s paper Socialist Democracy.

The DSM argues in the leaflet for the need for “NO light, No payment” campaign to be linked with the demand for the return of the power sector to the public ownership under the democratic control of workers and consumers. This is what will ensure that huge funds the government has been spent on the power sector will guarantee stable and affordable electricity.