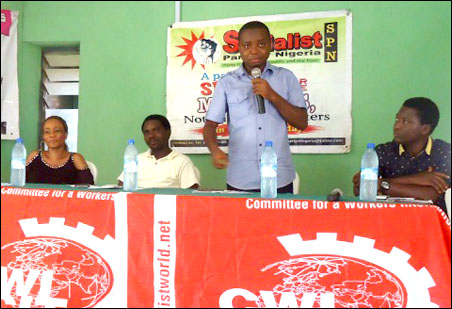 Various representatives of trade unions, civil society and artisan organizations mainly from Ibadan, the Oyo State capital, were drawn together on the 29th May, 2015 during a political symposium jointly organized by the members of the Oyo State Chapter of Campaign for Democratic and Workers Rights (CDWR) and Socialist Party of Nigeria (SPN). The theme of the symposium was “Mass misery in the midst of abundance and the task of the working people”.

This symposium which was held at NUJ Secretariat, Iyaganku, Ibadan, also had as its sub-themes as follows: Can civil servants form and belong to political parties of choice?; The plight of CRIN workers under Jonathan regime and the task before the new government; Non-payment of workers’ salaries and the way forward among others.

Leading the discussions were Comrade Kola Ibrahim, the Secretary of both CDWR and SPN, Osun State Chapter; Comrade Tessy Otunoye, the Chairperson, the CRIN branch of NASU and a member of CDWR, Oyo State Chapter and Barrister Ola Adeosun, a human right lawyer and an active supporter of SPN in Oyo State.

In his brief welcome address Comrade Abbey Trotsky, the Secretary of SPN and Coordinator CDWR in the state, explained that the symposium was actually organized to further create public awareness for SPN among workers, students/youths, artisans in the state. This was with a view to mobilise them to the party and deepen the campaign against the illegal refusal of the Independent National Electoral Commission (INEC) to registrar SPN despite having fulfilled all constitutional and legal requirements for the registration of a political party.

Abbey called on the participants to join SPN and CDWR in the struggle against neo-liberal capitalist attacks and assault on democratic rights as well as for formation of a working people political alternative with socialist program. This was after he had decried all the existing pro-establishment political parties in the country and their neo-liberal philosophy of privatization, deregulation, commercialization of social services which he described as the cause of the mass misery and squalor despite huge wealth of the country,

Shortly after the welcome address was the presentation by Comrade Kola Ibrahim who spoke analytically on the theme of the symposium. He started by commenting on some of the post-election statements credited to Muhammadu Buhari. These are appeals to the working people to bear with him which are indications that the regime can hardly implement its campaign promises. A reference was made to the Buhari’s statements that he “is coming into the Presidency at a very wrong time”, thus warned Nigerians not to see him as a Miracle worker! 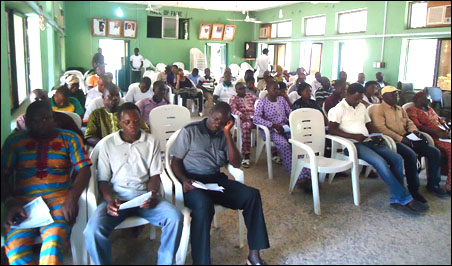 A cross section of the participants at the symposium – photo DSM

Kola stated that the perceived change in attitude of Muhammadu Buhari is not unexpected considering the anti-poor character and disposition of all governments formed by All Progressive Congress (APC) like their counterpart in People Democratic Party (PDP) in the states where they are in power. The pains and pang of the working people in Osun State under Rauf Aregbesola-led government in the state were highlighted.

The various schemes and projects like Opon-Imon (computer tablets), O-meal and free School uniform project implemented by the Aregbesola government were designed as means to defraud the working people in the state. The contributory pension scheme in the state was also described as one of the other several ways through which the state government robbed the poor to pay the rich.

Comrade Kola also spoke about the enormous failure of the Jonathan government at the Federal level which he acknowledged it cannot be separated from the eight years of the Olusegun Obasanjo regime of monumental failure and wastage of public resources.

He also stressed that given the neo-liberal capitalist policies that it will implement, the new Buhari government cannot achieve the change he has promised. It will require socialist transformation for the real change the working people and the poor are yearning for to be guaranteed.

He also spoke about the perennial fuel scarcity and fuel price hike that nearly crippled the country recently. The fuel crisis can only be curbed permanently by nationalizing the commanding height of the economy particularly the oil sector and placed same under the democratic control and management of the elected representatives of workers, consumers and the government. He further stressed that SPN members will continue to oppose to any increase in fuel price under the pretense of fuel subsidy removal.

He said the labour movement should demand that all the marketers indicted in the oil subsidy scandal must be arrested and prosecuted. This must be with a view of retrieving looted subsidy fund. Kola held that if the billions of naira of subsidy fund that had been looted by successive regime in the country is retrieved and genuinely invested, is enough to guarantee the total turn-around of all the local refineries such that the price of petrol can be as low as N40 per liter.

He however submitted that it is socialist government that is capable of favoring this kind of radical measures.

Next to speak after Comrade Kola Ibrahim submission was Barrister Ola Adeosun who spoke on the right of civil servants to form and belong to a political party. He cited different provisions of the Constitution of the Federal Republic of Nigeria to justify the rights of public sector workers to join and form a political party.

Comrade Tessy commended the role the DSM and CDWR had played since the sack of the 95 CRIN workers.. She informed the audience that despite the mass campaign against the mass sack of the CRIN workers, Prof Akoroda has not refrained from his despotic act of unleashing attacks on democratic rights workers of the institute but is getting more emboldened by day. Reference was made to the many queries she had been given from September 2014 till date.

She therefore appealed for more solidarity action from trade unions and civil society organizations within and outside Oyo state with a view to further deepen the campaign to save CRIN from a total collapse.

Following presentations by the speakers were contributions and questions from the audience. Notably among these was the suggestion that sacked CRIN workers should write both independent and collective letter to all trade unions, particularly NASU branches, in Oyo State calling for a solidarity mass action against the mass sack and attack on democratic rights in the Institute. All contributions that required clarification were responded to by the lead speakers.

At the event was also the inauguration of a four-person leadership committee of SPN in the state. The members of this committee are Comrade Babajide A O, Chairperson, Abbey Trotsky, Secretary, Michael Ogundele, Youth Organizer and Seun Oguniyi, Coordinator of women work.

At the end of this symposium a sum of N5, 780 was raised as struggle fund while 14 out of the 68 persons who signed the attendance register indicated interest to join SPN.