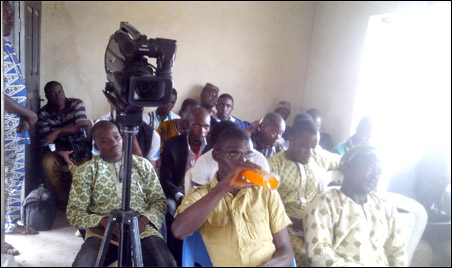 A cross-section of the participants – photo DSM

The Democratic Socialist Movement (DSM), Osun State Chapter, in continuation of its campaign for a mass movement against the wicked denial of Osun State workers their salaries for up to six months, organized a Public Symposium to mobilise workers to the arena of struggle and pile pressure on labour leaders to act. The symposium, which was held on Saturday, 23 May, 2015 at the DSM State Secretariat along Station Road Osogbo, had as its theme, Non-Payment of Salaries and Pensions: What is the Way Forward? Also there was a sub-theme, JUSUN Strike: For Total Autonomy for the Judiciary. The sub-theme was aimed at initiating discussion on the almost five-month-old strike of judiciary workers in Osun State. 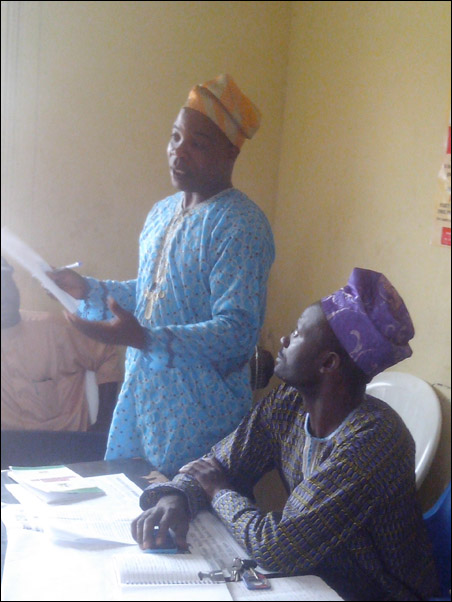 Leading the debate, Adeniji, through a prepared speech of the chairman of JUSUN, highlighted the core essence of the strike by JUSUN, which has to do with ensuring full financial autonomy for the judiciary. While he bemoaned the lack of autonomy for the judiciary, he did not state how they plan to take the strike, already in its fifth month, to the next level. Neither did the speech make any categorical condemnation of the nonchalant attitude of the Aregbesola government to the strike, which has paralyzed the judicial arm of government. The speech was also mute on the role of JUSUN in the struggle of Osun State workers for the immediate payment of their withheld salaries.

It took questions from the audience and a journalist to make the JUSUN representative expatiate on the level of the strike. Alfred Adegoke, who is a legal practitioner, further gave insight into the nature of the strike, which he argued has to do with ensuring constitutionally guaranteed financial autonomy of the judiciary. However, Kola Ibrahim, in his intervention, admonished the striking judiciary workers to see that judiciary cannot be isolated from the whole society. He maintained that until the society is transformed in the interests of the majority working people, justice will continue to favour the rich, while the working and poor people will have little or no access to the justice. He challenged the judiciary workers’ union not to limit their struggle to sit-at-home strike, but to organize mass actions, and mobilise other sections of the working class for their struggle. He also called on them to play active role in the campaign of the DSM for mass actions like strike, rallies, protests and pickets, by labour movement in the state to end the lingering mass suffering of workers over unpaid salaries and pensions.

Alfred Adegoke, in his contribution, gave graphic details of the suffering workers in the state are going through. He highlighted that the pensioners’ union revealed that 39 of its members died over unpaid pensions, while workers are already dying of curable diseases. He placed the blame at the doorstep of the Aregbesola government which, he said, had defrauded the state. More than this, he gave the socio-economic background to the problems facing workers, which he situated within the unjust capitalist system, the most backward form of which we are witnessing in Nigeria. He highlighted the fact that only a revolutionary movement of workers and the poor to end the rule of capital and enthrone a just socialist order can bring permanent end to the suffering of the working and poor people.

Kola Ibrahim, in his contribution, gave graphic details of how the Aregbesola government has wrecked the state finances and mortgaged the economy of the state in the interests of the contractors, political patrons and fronts. He analyzed how billions of naira have been diverted and misused through such projects as Free School Uniforms, “Opon Imo” project, O’School projects, road constructions etc., and through jumbo salaries for politicians. He asked why the Aregbesola government that claimed to be prudent would be handing out billion-naira worth of contracts for road and school construction to private contractors, when Ministry of Works that could handle those projects at cheaper rates, was made redundant. He challenged Osun workers not be hoodwinked by the lies of the government that the state could not pay salaries and pension because of dwindling federal revenues.

While agreeing that drop in federal allocation, occasioned by the backward economic arrangement of the capitalist class, has affected Osun State, he said this was only being used as alibi by the Aregbesola government to cover its financial mismanagement. He called on workers to challenge their union leaders to call congresses and declare mass actions, as the only way to pull the rug off the feet of Aregbesola government and force it to concede to workers’ demands. He also called on workers to rebuild their unions on democratic basis. He called on all change seeking workers to join the DSM, and its campaign for a working people’s party, with clear socialist programmes.

The high point of the symposium was the speech by Abbey Trotsky, who asked judiciary union not to limit their struggle to financial autonomy for judiciary alone, which actually will favour the undemocratically appointed judges than judiciary workers. Rather, they should ensure that workers also demand for their welfare entitlements and right of democratic management of the funds going to the judiciary. He also rubbished the excuse of the governors on why they could not pay salaries. He posited that the same state governors, who were demanding fiscal federalism i.e. each state managing its resources, are already insolvent just within few months of reduced allocations. He viewed the planned strike by Osun and Oyo labour leaders with suspect, asking why the same labour leaders had kept mute for months until now. He called on workers to take the initiative away from the hands of labour leaders by organizing mass actions like rallies, protests and pickets. He also called on national leadership of the labour movement, i.e. the NLC and TUC, to declare a national strike, rather than asking state labour leaderships who could declare strikes to do so. By this, they are isolating and localizing the struggle that was already national.

However, the contribution of Olusegun Lana, who came late as a result of the biting fuel scarcity, was instructive and analytical. In his contribution, Lana commended the DSM and ERC for supporting the struggle of the academic staff unions in the tertiary institutions, and promised that CASUOSTI and COEASU will continue to work with DSM. He also went into details on how the Aregbesola government has wrecked workers in the state, especially as regards the pension system, which the government has completely messed up. He bemoaned the fact that workers, especially their members can no longer be guaranteed of pensions after their retirement, because the government has refused to remit workers’ contributions while also failing to put its counterpart contributions. He stated that CASUOSTI’s position is that the Contributory Pension Scheme should be abolished, a demand the DSM has maintained since the beginning of the fraudulent Contributory Pension Scheme. He also announced the preparedness of CASUOSTI to declare total strike with mass actions in the coming weeks. This is a welcome development, as the DSM has for a long time been canvassing the union to take the road of mass action as the only way to force the recalcitrant Aregbesola government to yield to the genuine demands of the union.

Kola Ibrahim, in his response, promised the unalloyed and continued support of the DSM, ERC and SPN for the union in its struggle. Questions and contributions were raised by members of the audience. Over N2, 200 was raised in fighting fund, while three copies of the Socialist Democracy, the paper of the DSM were sold. The programme ended around 5.10 p.m.

The programme was inspiring, in spite of the biting economic situation vis-Å•-vis fuel scarcity and unpaid salaries. Definitely, many more workers and youths would have attended the programme if not for the economic dislocation caused by governments’ deliberate economic emasculation of the working and poor people, in the interest of the rich few; and the adverse weather conditions.