Neither the PDP nor APC Can Vow to Implement Chapter 2 of the Constitution!

On Thursday 6th February, 2015, the Academic Staff Union of Universities (ASUU) organised a public symposium on the issues facing the country at the ETF building of the University of Abuja, FCT, Abuja. The symposium was organised as a forum to engage representatives of political parties contesting in the 2015 elections about their manifestoes. 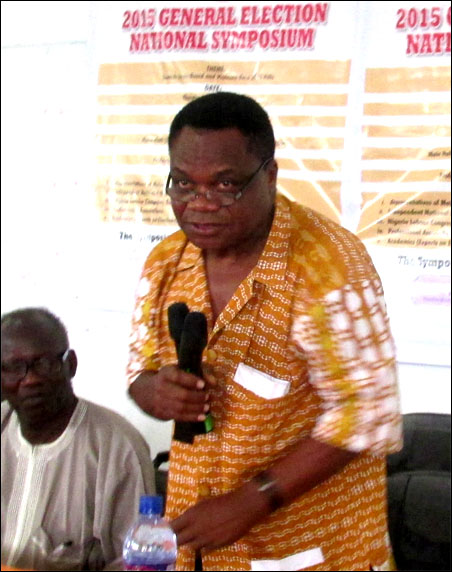 Of particular importance to the symposium was the need to assess the performance of the parties wherever they have had opportunity to govern as well as to challenge them to implement Chapter 2 of the 1999 constitution of the Federal Republic of Nigeria which prescribes the fundamental objectives of state policy. As speaker after speaker made clear, the provisions of Chapter 2 of the constitution contain several objectives and policy direction that, if implemented genuinely, can begin to make Nigeria work for the vast majority. For instance, the chapter contains provision that prescribes free education as a fundamental objective of state policy. Also there is a provision against privatisation. Unfortunately since 1999, all ruling political parties have repeatedly violated these and other provisions of the constitution.

Out of all the political parties, only the Peoples Democratic Party (PDP), the All Progressive Congress (APC) and the National Conscience Party (NCP) sent representatives. Interestingly when asked at the symposium, none of the main contenders for power (APC and PDP) could openly promise to adhere to the provisions of Chapter 2 of the 1999 constitution.

The symposium started around 11:30am with a welcome address by Prof. Assisi Asobie, former ASUU President, who is the coordinator of the national symposium. He said the symposium was convened specifically to discuss the 2015 general elections in Nigeria. He quoted section 14 of the 1999 Constitution of the Federal Republic of Nigeria which says that the Federal Republic of Nigeria shall be a state based on the “the principle of democracy and social justice”. Firstly, sovereignty belongs to the people of Nigeria from who government, through the Constitution, derives all its powers and authority. Secondly, the security and welfare of the people shall be the primary purpose of government. And third, the participation of the people in their government shall be ensured in accordance with the provisions in this constitution.

He said electoral system can be classified into three: Pseudo Democracy, Electoral Democracy; and Dictatorship. But Nigeria was classified as “Pseudo Democracy”. This means that Nigeria is seen globally as “a country which on paper, has a democratic system, but in which an authoritarian government does not allow free and fair elections and does not grant the chance to change the rulers by the people“. He further emphasized that the 2015 general election is to take place in the face of methodically but brutally executed insurgency, which is not just an affront to the Nigerian state but also a denunciation and rejection of liberal democracy and its election. Secondly, it presages the chance or possibility of either an election â€“mediated transition from rule of one political party to the rule of another at the center probably for first time in the political history of Nigeria, or a consolidation of the ruling party for a continuous period of twenty years again for the first time in the political history of Nigeria. Third the environment in which the electoral process is taking place is poisoned by violence and threats of violence, not just against individuals and groups but, ominously, against the state itself. It was against this background that the Academic Staff Union of Universities (ASUU) decided to organize and hold a symposium on the 2015 General Elections in Nigeria.

After this, the three party representatives were called upon to address the gathering. Yinusa Tanko, the National Chairman of National Conscience Party (NCP), who also doubles as the chairman of the Inter-Party Advisory Committee (IPAC), spoke on the motto of NCP: “Abolition of poverty” and went on to present the manifesto especially the Ten-Care programs of the party. However, despite these progressive policies, the NCP today is a pale shadow of the force it used to be, especially in Lagos, and has no clear strategy of how it could play a part in building a working peoples’ alternative. 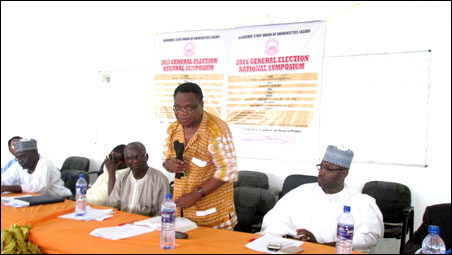 The PDP representative gave details of the party manifesto and what the party still has in plan. Interestingly, he could not successfully defend the government privatization policies or why the PDP-led Federal government could not end the Boko Haram insurgency and also give free, functional and quality education at all levels. In the last four (4) years, under incumbent President Jonathan, the wholesale transfer of social wealth from the State to private individuals, dubbed privatisation, went much farther than past regimes.

Interestingly, aside promises of social security programs like N10, 000 monthly unemployment allowance and a purported plan to deal with corruption, the policy of the APC did not sound much different from the PDP’s. The promised social program of the APC are expected to be bankrolled by a free market economy which is currently in dire straits as a result of decline in crude oil price.

While the debate lasted, one could deduce from the speeches of the representatives of the two major parties that they both support privatization and all the profit-driven policies of capitalism. For instance while the representative of the PDP could not convince the audience while fuel price could not be reduced below N87 and while free education cannot be provided, the APC representative also failed to explain the anti-workers policies of the APC governors. In Osun state for instance, workers’ salaries have not been paid since October 2014 while pensioners in the same state have not collected their pension since September 2014. Also at the Lagos State University (LASU) last year, it took mass struggles by students, Joint Action Front (JAF), Education Rights Campaign (ERC) and LASU chapters of ASUU and SSANU before the high fees were reversed.

Former ASUU president, Dr Dipo Fashina, while intervening in the debate read out chapter 2 of the Nigerian Constitution to the audience. Quoting Chapter 2, section 18, sub-section 1 to 3 of the constitution which in Subsection 1 states that Government shall direct its policy towards ensuring that there are equal and adequate educational opportunities at all levels. 2, Government shall promote science and technology. 3, Government shall strive to eradicate illiteracy; and to this end Government shall as and when practicable provide (a) Free, compulsory and universal primary education. (b) Free secondary education; (c) free university education; and (d) free adult literacy programme. He said this is what the constitution of the Federal Republic of Nigeria says but it is difficult for all ruling political parties in Nigeria to adhere this as they subscribe to anti-poor neo-liberal capitalist program. He further lampooned the mismanagement of the economy by Jonathan government in spite of oil windfall until recently. He stressed the need for a party that will place commanding heights of the economy under the democratic control of the people and not selling out major key sectors of the economy to a few individuals.

In his contribution the President of ASUU, Dr Nasir Fagge, said that even while some of the political parties inscribe in their manifestoes, programs that correspond to some aspects of the chapter 2 of the constitution like free education etc, it appears that this is merely to satisfy requirement for registration because none of the ruling parties have ever implemented anything close to this. This is because they all subscribe to the doctrine of IMF and World Bank polices of cut in social services.

The Secretary of Joint Action Front (JAF), Abiodun Aremu, in his contribution made it known that an attempt to postpone election is a means to disenfranchise Nigerians by the ruling class and therefore, there is the need to build a pan-Nigeria movement from all groups, tribe, religion and region to fight for an end this system of looters. He also refers to the intervention by the imperialist west in Nigeria’s election as an opportunity to recolonize Nigeria.

Hassan Taiwo Soweto, the National Coordinator of Education Rights Campaign (ERC), in his contribution said one does not need to go far before knowing that both PDP and AOC are not fundamentally different. A clear example is the LASU school fee hike last year which required united action by students, JAF, ERC and staff unions before the fees were reduced. Another example is that in all APC controlled states, just as in PDP States, workers are not paid the 18,000 naira minimum wage up till now.

He reminded ASUU of its declaration last year for “A Socialist Welfare State” and urged the union that striving to actualise this is the best way to safeguard the interests of the Nigerian working masses, youth and poor. Whatever illusions in either Buhari or Jonathan would be short lived as either of them would implement austerity measures once in power. He called on the ASUU leadership to try to take practical steps in convening a conference of trade unions, activists, socialists and civil societies to discuss the formation of a worker’s party that will help to build a clear working people’s political alternative.

The program was thought-provoking and DSM/ERC members made a successful intervention. Five participants signed up to join the DSM while 50 copies of the DSM special publication on 2015 general elections were sold. We also sold 5 copies of the DSM book titled “DSM AND THE STRUGGLE FOR WORKING PEOPLE’S ALTERNATIVE” and 23 copies of December/January edition of our newspaper Socialist Democracy.