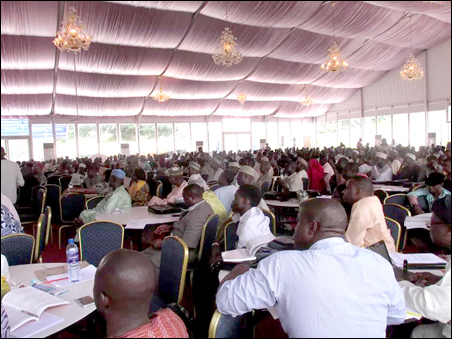 A cross section of participants at the ASUU Education Summit 2014

The summit which had no fewer than 700 participants for each day provided an opportunity to discuss, deliberate and suggest solutions to crises bedeviling Nigeria’s public education sector. This was done by sizeable numbers of academics, non-academics/ technologists and leaders of civil society organisations during various paper presentations that suggested how to reverse the backward nature of Nigeria’s public education sector.

Tuesday 28th, October, 2014 (the second day of the summit) was a special session given to civil society organisations for their presentations. This was the session where the ERC, a campaign platform of the Democratic Socialist Movement (DSM), made its own paper presentation by its national co-ordinator, Comrade H.T Soweto. 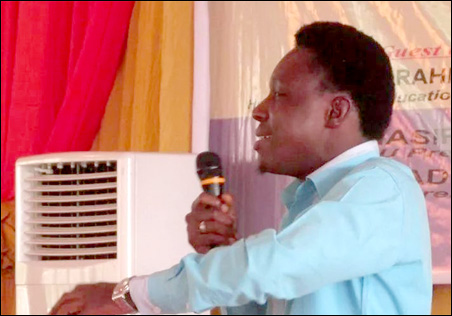 Soweto, in his presentation, commended the effort of the universities’ workers unions particularly the ASUU for showing good examples to the wider labour movement in the country through their age-long struggles against attacks on the Nigeria’s university system. He called for a drastic cut in the excessive pay and emolument of all political office holders such that money freed from these excesses can be added to the funds needed to rejuvenate the collapsed public education sector. He also pointed out that ASUU, other workers’ union in education sector and the wider trade and labour union movement in the country must practically begin to mobilise the country’s populace for a radical change in the education sector and in the formation of a working class political alternative.

There was also a special students session on the fifth day of the summit. This was independently anchored by student representatives present at the summit. At this session, students strongly frowned at the rate of collapse of the Nigeria public education sector, from primary to tertiary institutions, and thereby resolved that government at all levels must adequately fund the public education sector to at least 26% of the annual budgetary allocation to education with capital allocation taking nothing less than 60% of this. The students’ representatives also supported the declaration of free education at all levels while proposing that government must adopt as a state policy for all political office holders to enroll their children in public schools in the country.

Other recommendations include: democratisation of the decision making organs of the university system to include ASUU, NASU, NAAT, SSANU representatives and two student representatives each at both undergraduate and postgraduate level; cancellation of all fees including the total rejection of the fraudulent acceptance fees imposed on Nigeria students in tertiary institutions. There was also a proposal for the formation of a “federation of radical students’ unions” which will involve all radical students’ unions across campuses

Shortly after the students’ session, there was a press conference in which the communiquÃ© of the summit was read by the Chairman of the organising committee Dr Dipo Fashina. 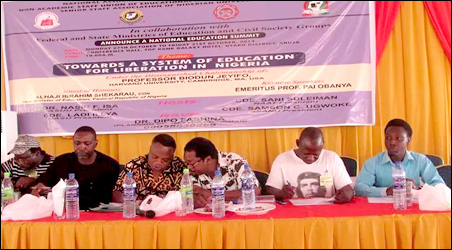 The summit agreed that the most fundamental problem bedeviling the education sector in Nigeria is that it is located within a philosophical and political economic system which emphasises personal self- enrichment and individual aggrandizement instead of emphasizing knowledge acquisition geared toward public good and national development. The ASUU and the three other workers” unions seriously emphasised that the current philosophy on education does not address the realities, identities, values, customs and aspirations of the Nigerian people.

In the same manner, it was therefore agreed that the resolutions of the summit will produce a charter on liberating education that will reflect the aspirations, culture, values and realities of the Nigerian people within the context of a dynamic world. Going further, the summit emphasized that the charter will be based on a philosophy of education geared towards public good, national development, and equity in place of the existing policy which promotes self- enrichment and personal aggrandisement. The summit, in the same spirit of all participating workers’ unions, grossly rejected the on-going systematic privatisation of education.

An important highlight of the summit was the discussion among participants that if a few unions in the public university system could convene a national education summit fully funded by themselves and independent of government, there is no reason why the labour movement cannot convene an independent political summit that can bring together genuine representatives of the working class, youths and oppressed masses to discuss how to fight to rid the country of the capitalist-induced crisis of poverty amidst plenty.

By and large, the summit in a way has shown the latent power of the labour movement, albeit just its section in the University system, in Nigeria. One can only imagine how the struggle to liberate society can be hastened if the entire labour movement were to take a cue from the efforts of the University unions.

As the ERC argued and the summit agreed, the proposals for a liberating education cannot simply be submitted to a capitalist government for implementation, they must be turned into a charter to mobilise for struggles. The first step in this direction is for the four unions to call a strike and joint nationwide mass protests in the New Year as part of a comprehensive action plan to step up the campaign to save public education. A consistent struggle against education attacks if linked to a plan to build an alternative working class political party that can fight to end capitalism and put in its place a democratic socialist system is the only way to guarantee that public education is properly funded.