SPN Challenges INEC’s Rejection of its Application in Court 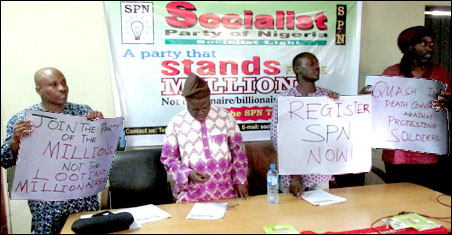 The Socialist Party of Nigeria (SPN) held a press conference yesterday, September 16, 2014, in Lagos at the International Press Centre (IPC) to make public the rejection of the party’s application for registration by the Independent National Electoral Commission (INEC) despite fulfilling all constitutional provisions on party registration as well as the requirements set by the electoral body. The conference was also used to announce the filling of a case at the Federal High Court Abuja by the party to challenge the unconstitutional action of the INEC.

The members of the SPN are prepared to support the legal process that has been commenced with a series of political actions to force the INEC to reverse its unconstitutional action and register the party.

Below is the text read by Segun Sango at the press conference:

QUEST FOR THE REGISTRATION OF THE SOCIALIST PARTY OF NIGERIA (SPN)

We have invited you here today to explain why the Socialist Party of Nigeria has begun legal action against INEC and to protest at its refusal to issue our certificate of registration in mid-July 2014 and its subsequent decision, communicated to us on August 12, that the SPN’s “registration is terminated”.

On 20 July, 1998, General Abdulsalam unfolded the political agenda that formed the basis of the current civilian dispensation which started on 29 May, 1999. The Democratic Socialist Movement (DSM), the initiators of the Socialist Party of Nigeria (SPN), released a public statement carried in its organ “Socialist Democracy” published in 1998. Esteemed media practitioners, permit us to make a few quotations from the above cited statement. “Contrary to the false claims being made by most capitalist commentators, military apologists, men and women of fickle memories, General Abubakar’s political agenda unfolded in his nation-wide broadcast of 20 July, 1998 in which he shifted the handing-over date of the military from 1st October, 1998 to 29 May, 1999 does not in any positive sense represent a way towards genuine and lasting democracy, especially for the working people of Nigeria.

“The Abubakar junta’s transition programme, like those of its predecessors, can never give birth to genuine democracy, unity and stability.

“Socialists know very well that the prevailing mass misery in the land, in the presence of inexhaustible resources, is not due to the fact that Nigeria is made up of people with different tongues and cultures but primarily a by-product of the imperialist capitalist economic relations. Under this arrangement, the economy and people of Nigeria are held in bondage by multinational corporations just to satisfy the whims and caprices of the capitalist elements in USA, UK, France, Germany, Japan, etc. All what the local capitalist elites (both civilian and military) are concerned about is how they can individually and collectively make the best for themselves from the capitalist induced misery. They are never and will never bother about the real development of the economy and genuine unity amongst the diverse tribes that make up Nigeria. Only a socialist government of the working people and the poor in general can put in place necessary economic and political policies which can fundamentally unite and cement the various ties of relationship amongst the various ethnic groups that make up Nigeria”. 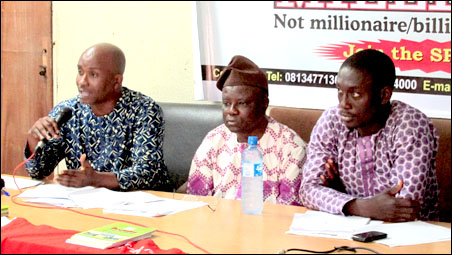 Sixteen years after the return to civil rule all of the above prognosis has been frightfully confirmed. Yes, since the political and legal struggle inspired by late Chief Gani Fawehinmi and the NCP in the case of Balarabe Musa & Others Vs INEC which liberalized the political space, many parties have been registered. Sadly to note however, the existence and proliferations of these parties in no any sense offer genuine socio economic and political opportunities for the vast majority of the working masses and the poor because severally and collectively, all of these parties are committed to pro-rich capitalist viewpoints.

Today, just as before the current civil rule dispensation, only a minority layers of the working people have access to decent living, education, healthcare, job opportunities, etc. The socio-economic and infrastructural conditions of the country still largely remain in pitiable conditions. For a country with stupendous natural and human resources, the vast bulk of Nigerian people, especially the working and poor sections, do not deserve the prevailing level of unmitigated mass misery and the prevailing political inequities and instability. This was the central political consideration that informed the decision of members of the Democratic Socialist Movement (DSM) in May 2012 to openly proclaim and call on socialist activists within the working class movement and the poor across the country to work towards the registration of a genuine pan-Nigerian socialist party for the defence and permanent actualization of the working peoples socio-economic needs and political aspirations.

The rejection by INEC of the SPN application for registration as a political party, (after the Association has fully met the conditions for such purpose in the 1999 Constitution as amended and 2010 Electoral Act as amended) represents a serious political throw back to 2002, i.e. before the Supreme Court made its pronouncement on the rules and protocol for the transformation of political associations to political parties.

Unfortunately, the INEC under Prof. Attahiru Jega’s leadership still appears trapped in the capitalist ruling elites’ quest to undemocratically shut out the working masses and the poor from genuine political participation.

On 9 January, 2014, the Socialist Party of Nigeria (SPN) as a political association wrote to INEC to demand the conditions that the association has to meet to transform into political under the 1999 constitutions as amended. The cited letter was sent by DHL courier. Two weeks after, when we did not get any response from INEC, we also wrote another letter delivered by hand by an SPN member based in Abuja. On January 27, INEC eventually responded to our letter dated January 9, 2014 with a terse response that only after the payment of a sum of N1m (One million naira) called processing fee can our association receive the requested conditions and information.

Consequently, members of the SPN raised a public fund raising campaigns from members and supporters across the country to meet the financial demand of INEC. Eventually, the SPN purchased a First Bank cheque in the name of INEC for the requested purpose. When our member went to submit the photocopies of the documents with which we effected payment of the said sum of N1million, INEC officials insisted that unless the original bank vouchers used for the said payment is produced, the requested forms by SPN cannot be supplied. In a letter dated 24 March, 2014, the SPN complied with the requirement of the INEC officials mentioned above. However, INEC only obliged us with the requested forms through a letter dated 14 April, 2014 and as usual by calling SPN officials on phone to send someone to come and collect the said forms. This was notwithstanding the fact that we had already paid one million naira as processing fees.

On 12 June, 2014, the SPN officially submitted an application for registration in response to INEC letter dated 14 April, 2014. The INEC official, one P.A Enuke, who received the application refused to issue a proper acknowledgment as specified in Section 78 (2) of the Electoral Act as amended under a very bogus and untenable excuse. The SPN wrote a protest letter through the INEC chairman dated 16 June, 2014 on the improper acknowledgement of the SPN application by an INEC official.

Instead of obliging the SPN request, INEC in a letter dated 31 July 2014 now wrote a letter to the SPN with an information that it is sending a verification team to visit the proposed headquarters of our association on 4 August 2014 to confirm the existence of the national headquarters of the association as well as the national executive committee reflecting federal character as required by the constitution. 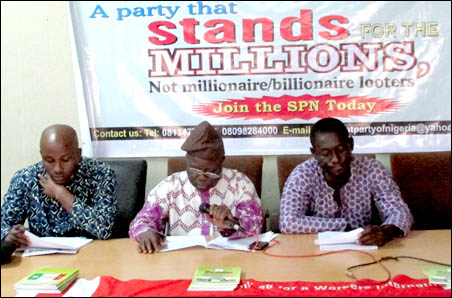 The cited letter was delivered on the evening of August 1 2014 which was a Friday, while the visitation was fixed for the next working day which was Monday 4 August, 2014. The SPN in a letter dated 4 August, 2014 replied INEC letter dated 31 July 2014 stating that the period for processing of SPN application has elapsed but that the National Chairperson and National Secretary can make themselves available if need be for any clarification on SPN application for registration. On the 4 August, 2014, five INEC officials led by P.A. Enuke visited the SPN secretariat in Abuja and during the visit took copious photographs of the entire premises within the office. However, on 12 August 2014, INEC wrote SPN informing that its “registration is terminated” on the basis of the purported refusal of our association to allow for the verification of the claims in form PA1. In a letter dated 22 August, 2014, the SPN wrote INEC to debunk the commission’s erroneous claims in its letter of 12 August, 2014.

When a member of the SPN in Abuja took the letter for submission to the INEC office, it was rejected on the ground that INEC had stopped entertaining any issue bordering on party registration until after the 2015 general elections. Eventually, we had to send the said letter through a DHL courier.

Under Section 79 of the Electoral Act 2010 as amended, a political association seeking to transform into a political party under the 1999 constitution must seek legal redress in court within 30 days if dissatisfied with the decision by the INEC to reject its application. Consequently, the SPN on the 10 September, 2014 filed an action against INEC rejection of its application to be registered as a political party. Attached to this press statement is a photocopy of the processes filed at the Federal High Court of Nigeria in the Abuja Judicial Division in suit no: FCH/ABJ/CS/630/2014.

Finally, members and officers of the SPN hereby pledge to doggedly continue to utilise all legal, democratic and political means to agitate for the registration of SPN and ultimately the socialist transformation of Nigeria that would enable Nigeria’s abundant natural economic and human resources to be of primary benefit to the vast bulk of Nigerians.

Thank you for listening.