ERC 2014 EDITION OF FREE HOLIDAY COACHING HAS BEGUN IN AJGEUNLE.

ERC 2014 EDITION OF FREE HOLIDAY COACHING HAS BEGUN IN AJGEUNLE.


ERC 2014 EDITION OF FREE HOLIDAY COACHING HAS BEGUN IN AJGEUNLE.

By Moshood Oshunfurewa and Benjamin Osigwe 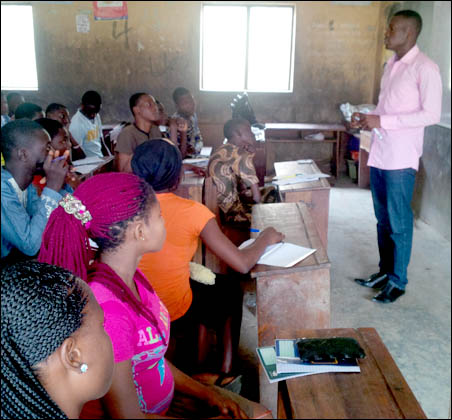 A teaching session at the ERC holiday coaching, photo by DSM

This selfless service of ERC and socialist students/youth members of the Democratic Socialist Movement (DSM) was initiated in Lagos State in 2004 to support children of the downtrodden working class in the slum of Ajegunle, Nigeria.

This year free coaching started on the 4th of August, 2014 with turnout of 79 students on the opening day. This includes 21 students in SS1, 19 in SS2 and 39 in SS3 including some students that will be taking West Africa Examination (WAEC)-private. 17 volunteer teachers were also in attendance.

This coaching is part of the campaign of the ERC to demonstrate to Nigeria’s capitalist government that free and quality education from primary level to tertiary level is possible. If Nigeria’s stupendous natural and human resources are adequately used, democratically managed and controlled by the working people, free education will not only be possible at the primary level but up to the tertiary level as well.

Today, public education in Nigeria is chronically underfunded and mismanaged – a consequence of the brutal neo-liberal capitalist policies. This has made the education sector a ground of incessant industrial action with attendant spiral negative effects.

The ERC campaigns for the provision of free, functional and democratically-managed public education at all levels. We support all struggles of students and education workers for improvement in working conditions, better pay, against fee hike and commercialisation and for an end to infringement on democratic rights on campuses. In communities such as Ajegunle, we work actively among school students and teachers to campaign for the renovation of school buildings, stoppage of illegal charges and improvement in the teaching and learning facilities. The free holiday coaching while it provides opportunity for indigent students to attend coaching classes during the long-term holiday also helps to highlight the abandoning of public education especially in poor communities like Ajegunle and puts a search light on the activities of the authorities in charge of the schools. 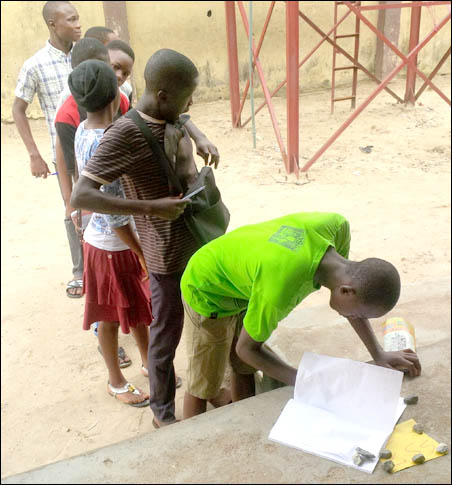 Students registering for the coaching – ERC 2014, photo by DSM

On the first day of the coaching, three classes for each of the three senior classes (SS1, SS2 and SS3), was taken for the day. It commenced exactly 9am to 1:20 pm.

The coaching had been preceded by intensive mobilization with active involvement of comrades at the branch level of DSM. Some students that attended the coaching in previous years also took part in the mobilization exercise which covered both public and private schools in Ajeromi, Ifelodun, Apapa, Mile 2, Orile, Badia and Wilmer.

Each of these subjects has three to four volunteer teachers. The success story about this year’s exercise is that three of our previous students in the past years that are in the university are now currently participating as volunteer teachers.

During the break time, all students at the opening day were addressed on the purpose of organizing the free holiday coaching while the Education Rights Campaign’s anthem was sang by all.