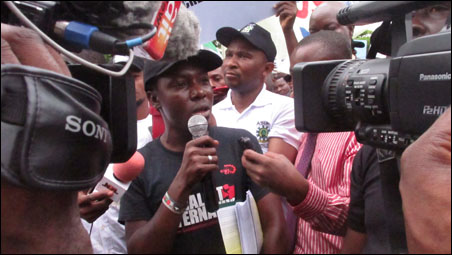 The aim of the rally was to protest against the Federal government’s attitude to the demands for the revitalization of the Polytechnics and Colleges of Education sub-sector which led to both ASUP and COEASU embarking on strikes. While the strike of the ASUP has lasted for ten months, that of COEASU has lasted for three months. 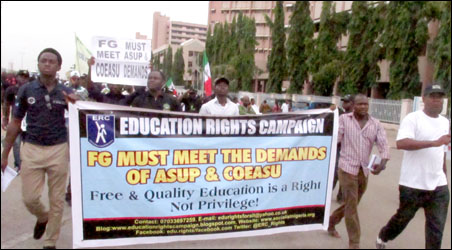 ERC banner in the protest, photo by DSM

The protest became inevitable because the Federal government has turned deaf ear to the demands of both unions. We in the Education Rights Campaign (ERC) have severally called on both unions to commence nationwide mass protests and demonstrations to compel the government to meet their demands so that schools can be re-opened for students to resume their studies. To us in the ERC the rogue capitalist ruling class in power do not care about how many months a staff union goes on strike and also no matter how terrible the education sector is they do not care because their own children and families are not directly affected.

We in the ERC applaud this kind of joint action by both ASUP and COEASU in the education sector. We participated with our banner, leaflets, placards and comrades of the Democratic Socialist Movement (DSM) had their paper Socialist Democracy. The protest rally commenced at 9am from the Federal Secretariat car park with different placards bearing inscriptions like “Wike must go”, “Fund education with our resources”, “We will continue to protest until our demands are met”, “FG must meet demands of ASUP and COEASU”, “No to disparity between HND and Bachelor Degree”, “Trade unions must build a mass workers party for the masses”, “26% budgetary allocation to education”. 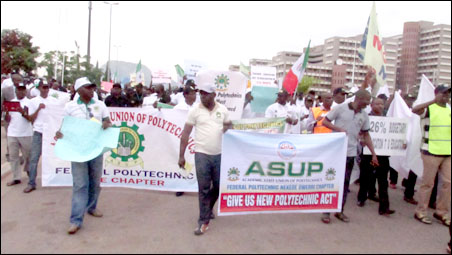 However, hardly had the protesters, numbering over 500, moved out from the Federal Secretariat Car Park when the police tried to block and halt the protest. It took the brave insistence of the protests for the rally to get to the Federal Ministry of Education where the leadership of both unions addressed the public and the members that were present. The workers’ leaders in their speeches condemned the supervising Minister of education Nyesom Wike for spreading falsehood about the ongoing industrial actions saying his lies were aimed at turning Nigerians against the unions.

The National President of ASUP, Mr. Chibuzor Asomugha, said the purpose of the rally is to protest against the way the federal government is dealing with the lecturers in the polytechnics. According to him, ASUP initially had a 13-point demands which covered issues of funding, facilities and teaching infrastructures, workers welfare and conditions, establishment of a National Polytechnic Commission, setting up of a Needs Assessment Committee and the ending of the disparity between HND and BSC. These were later pruned down to four after some eminent Nigerians intervened. However despite the magnanimity of the union, the Federal government is doing nothing to meet these four demands. He also openly called for an end to the discrimination against Polytechnic graduates. Polytechnic students spend five years while many University students spend four years yet there are discrimination against Polytechnic students and their certificates. According to him “the government stopped our salaries; they think this will force us to go back to work but we are not deterred by the threat, the strike will continue until our demands are met”.

The National President of COEASU, Mr. Emmanuel Nkoro, in his own speech said the government is not sincere with stakeholders in the sector. He highlighted the demands of the union which include the settlement of teaching practice entitlements, review of the laws establishing the National Commission for Colleges of Education and payment of monetization arrears to staff of colleges of education. He also called for special attention to teacher education by the government.

The National Coordinator of ERC Comrade Hassan Taiwo Soweto in his own solidarity speech said the ERC supports the strike of the both unions and shall continue to unite with them until the government meets their demands. As far as the ERC is concerned, the demands of the unions are what government can meet in few days but the government is an anti-poor capitalist government that does not care about public education. He called on the staff unions to remain steadfast and resilient. He said it is only social revolution that can ensure that public education is well funded and placed under democratic management. Other representatives of organizations and professional bodies like the National Association of Technologist in Engineering (NATE) as well as the representative of the Nigeria Labour Congress (NLC) also gave solidarity speeches at the rally.

From here the protesters moved on to the National Assembly but were stopped by armed police who had set up a barricade and were firing tear gas and water cannon. A few protesters were wounded as a result. Despite the ferocity of the repression, the protesters did not disperse. This eventually forced the police to allow the leadership of both unions to proceed alone to the National Assembly to submit the petition highlighting their demands. After the arrival of the union leaders, we marched to the Nigeria Labour Congress (NLC) Secretariat where the rally was ended and discussion on the next actions was held.

The ERC in the later in the day issued a press statement to condemn the repression by the police and also called for more actions until the striking unions’ demands are met.

We sold copies of Socialist Democracy were sold and also circulated thousands of ERC leaflet produced in support of the strikes of both unions. Members of DSM and ERC from five different branches participated in the protest.