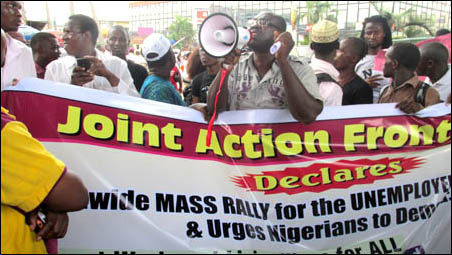 On Thursday March 27 no fewer than one hundred people including unemployed youths and activists gathered at the Nigerian Civil Service Union Secretariat at Alausa â€“ Ikeja, Lagos, to protest the death of about twenty young people during the Nigerian Immigration Service (NIS) recruitment exercise on March 15. Scores of applicants were also injured at the exercise.

The Joint Action Front (JAF) organized the protest to underline the fact that the crisis of unemployment is the root cause of the sad incident of March 15 and to demand decent jobs and payment of unemployment benefits.

Reflecting the dire unemployment crisis, over half a million Nigerians trooped out in different parts of the country to write examination for 4,500 job openings at the Immigration Service. 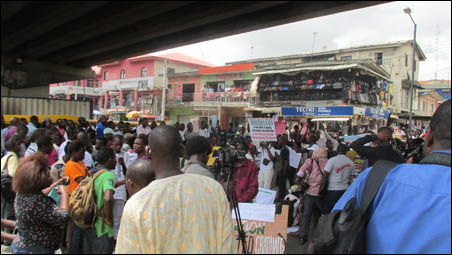 Protesters at Ikeja where march was ended, photo by DSM

Declaring the protest open, the JAF Secretary Abiodun Aremu said that it was expected to be the beginning of mass actions against the monumental unemployment. He stated that the governments, at all levels irrespective of political parties, are culpable of the failure to create decent jobs opportunities despite huge resources at their disposal. This is because all the parties in political power subscribe to the same anti-poor neo-liberal capitalist policies.

Speaking after him, the JAF deputy chair Achike Chude read the JAF statement to the media and the general public present at the venue. He highlighted the demands of the protest which include the compensation to the families of all dead and injured applicants decent work and living wage for all, unemployment benefits for all unemployed, reversal of IMF and World Bank policies and public ownership and democratic control of the of the key sectors of the economy

A representative of the National Association of Unemployed Graduates (NAUG) also addressed the gathering before the march took off. The unemployed youths came with placards with different inscriptions. These include: “FG should create job”, “We need decent jobs”, “Stop killing us before we get job”, “Pay us back our 1000 Naira”, “Job creation is not rocket science”. 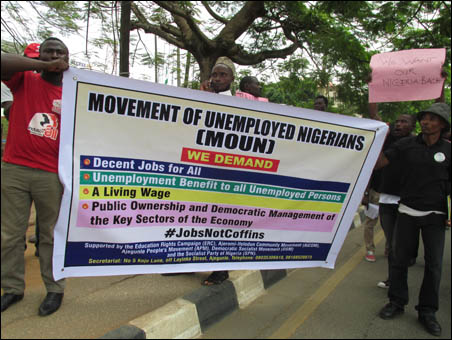 The protesters marched from the Nigeria Civil Service Union Secretariat through Alausa-Ikeja road and ended at the Ikeja under-bridge. Here the leadership of JAF spoke to a bigger crowd that immediately gathered on sighting the protesters. The protest lasted for about three hours. The success of the protest cannot be over-emphasized as many onlookers saluted and expressed their support for the demands of the protest.

Members of the Democratic Socialist Movement (DSM) participated in the protest with our Socialist Democracy (SD) and our new publication. The DSM branch in Ajegunle had together with other groups earlier organized a protest to the Ajeromi Ifelodun local government secretariat on March 20 under the platform Movement of Unemployed Nigerians (MOUN),which was also represented at the JAF protest.

MOUN is an initiative of the DSM, Education Rights Campaign (ERC), Ajeromi Ifelodun Community Movement (AICOM) and Ajegunle Peoples Movement (APM). The next stage now is to see how to develop activities for the new platform so that it becomes an active campaign that can articulate the demands of youths for decent jobs and a real future much as the ERC does for students and education workers. 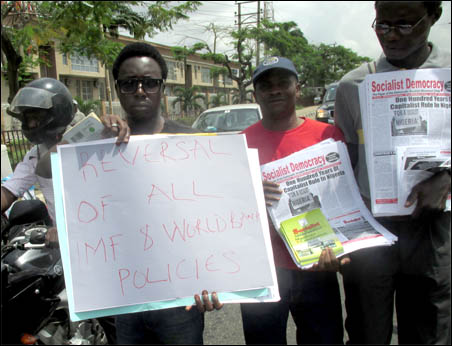 DSM members at the protest march, photo by DSM

The crisis of unemployment will remain an explosive issue for as long as capitalism (a system that prioritizes profit over peoples’ needs) exists. It is not as if there are no jobs. As the Education-For-All Global Monitoring Report recently revealed, over 212,000 more teachers are needed in the primary and secondary schools to bridge the yawning teacher:student ratio. But this will require that government now invests the resources that are daily looted in recruiting more teachers, paying salaries, building more schools and repairing school buildings. This the capitalist ruling elite baulk at doing because it would reduce the amount of money available for looting. 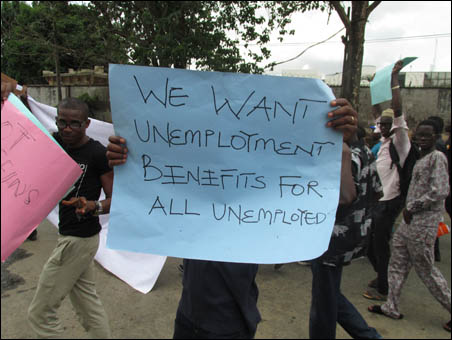 Unemployment benefits for all unemployed, photo by DSM

We have to fight to end capitalism and replace it with a democratic socialist system. Under a socialist system, Nigeria’s economy will be publicly owned and democratically managed by the working people themselves in such a way that resources are channeled towards funding education, healthcare, providing jobs and a decent future for everyone.

Members of the DSM were present at the protest, and we sold 13 copies of March/April edition of Socialist Democracy and 3 copies of the Manifesto of the Socialist Party of Nigeria (SPN).