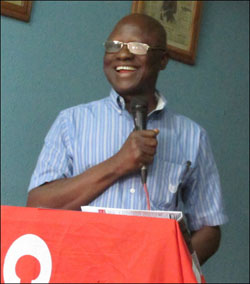 It is “a book of history, a book of ideology, a book of contentions, a book of struggles and potentially a working peoples’ manifesto”- Dr. Taiwo Oloruntoba Oju

On March 22 members of Democratic Socialist Movement (DSM) and invited guests gathered at the International Press Centre, Ogba, Lagos for the launch its new book titled “DSM and the struggles for Working Peoples’ Political Alternative” which was published in December 2013.

The book is a compilation of selected articles that articulate the imperative of building a working peoples’ political party on socialist programme in Nigeria. This also includes a selection taken from our agitation and struggles on this demand since the formal inception of the organisation in 1986. However, though a volume of 434 pages with a small font size, the book accounts for just a part of the DSM intervention in the daily struggle of the working people and youths as well as agitations and efforts towards socialist change in Nigeria. This underscores the enormous work of the organisation since its foundation.

While declaring the launch open, Dagga Tolar who was the moderator of the programme, gave a brief history of the organisation and our support for the struggle of the working people and youth against the successive rotten capitalist regimes. He asserted that only a working peoples’ government can guarantee development and unity in Nigeria. He said the sad events of Saturday May 15 when about 19 applicants died at the immigration service examination exercise which was thronged by millions of Nigerian youths further exposed the monumental failure of successive capitalist governments. 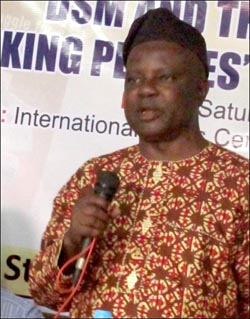 In his brief introduction Segun Sango, the General Secretary of DSM, who also doubles as the editor of the book, said that the major reason for the publication of the book is to arm the working people in the struggle for political alternative on socialist programme. He said Nigeria is so rich both naturally and in human resources but the capitalist system has meant suffering and deprivation is the lot of the vast majority of the population. He recalled the half-hearted attempt by the Labour leadership to form and register the Nigerian Labour Party in 1989 which did not scale Ibrahim Babangida’s hurdle. This was however without the Labour leadership raising a finger against the military dictatorship who, in October 1989, themselves decreed two parties into existence: Social Democratic Party (SDP) and National Republican Congress (NRC). He recalled that the June 12 struggle and mass efforts to kick out the military showed the readiness of Nigerians to fight for a better society. 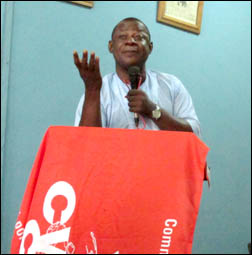 Sango reasoned that the lamentation of Nigerians on many radio phone-in programmes on the utter failure of the government in every area underlines the need for a working people government with a socialist program. However the current Labour Party, formed by the NLC in 2002, has been abandoned to political merchants who have made it a trashcan of anti-poor politicians cannot usher in a working peoples’ government. This also means that the working people do not have a party, both inside and outside the governments, that represents their interests. This, he explained, is why the DSM and like-minds are making efforts to register the Socialist Party of Nigeria (SPN) so that the poor and working people can have their own fighting political party. He informed the gathering of the efforts to surmount the obstacles set on the path of the registration of the party by the capitalist ruling elite and Independent National Electoral Commission (INEC). To the delight of all at the event was the information that the SPN had raised and paid to INEC the one million Naira as the non-refundable administrative fee it demands from new parties. Having fulfilled this requirement we are expecting the INEC to furnish us with all necessary forms and documents to file our formal application for registration. This money was raised from members and collaborators of the party.

The reviewer of the book Dr Taiwo Oloruntoba-Oju, Chairman of the Academic Staff Union of University (ASUU) University of Ilorin (Unilorin) Chapter and leader of the famous UNILORIN 49, commended the DSM for its leading roles in the struggles for social justice and socialist change in Nigeria. He especially appreciated the solidarity of the organization during the struggle for the reinstatement of the 49 lecturers sacked in 2001 by the Unilorin authorities with the endorsement of the then Obasanjo government. He highlighted the crucial role the DSM’s paper, Socialist Democracy, played in the struggle. He said his acceptance to review the book and the presence at the launch was one of the ways of repaying the debt of gratitude to DSM. 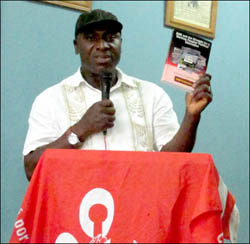 It should be recalled that the struggle of UNILORIN 49 lasted for over 8 years and was fought up till the Supreme Court which in 2009 ordered the unconditional reinstatement of the lecturers.

Dr Oju started the review proper with a content audit which, according to him, helps to showcase the dimensions of a book beyond what is immediately apparent in the book’s preliminary pages. This, he said, is particularly important as the list of contents provided in the book more or less conceals the vast resources contained in the book. He then highlighted some key items and areas in the book in this respect.

In the characterization of the book, “within the context of popular struggles in the country” he said the book is “a book of history, a book of ideology, a book of contentions, a book of struggles and potentially a working peoples’ manifesto”.

According to Oju, it is a book of history because it chronicles the history of workers struggles against oppression and injustice in the country from the military era to the current civilian dispensations. It also chronicles the role of Labour leadership and of individual national Labour leaders like Ali Ciroma, Hassan Sunmonu, Paschal Bafyau, Adams Oshiomhole and Abdul Wahab Omar. Not limited to Labour leaders, the book also mentions “the role of some of the national heroes of workers and popular struggles (especially late Gani Fawehinmi, Beko Ransome-Kuti), and younger icons, Lanre Arogundade who braved odds to stand for elective positions in Lagos”. He however clarified the point that he did not claim that the book captures every element of the history of working class struggles in Nigeria but its coverage is vast.

Dr Oju’s reference to Lanre Arogundade, a leading member of DSM, was apparently in relation to the contest for Lagos West Senatorial election in 2003 on the platform of National Conscience Party (NCP) where against the monumental riggings and manipulations by the AD state government (the forerunners of the APC) he came third and recorded over 77,000 votes. The members of DSM left the NCP in 2007 after the party had been taken over and liquidated by some right wing elements following the resignation of Gani Fawehinmi as the National Chair. All this is captured in the chapter on NCP in the book.

On why the book is that of ideology, Oju said, “every part of the book proclaims allegiance to Marxism as a fit ideology for the emancipation of the workers and poor persons in the country and socialism as goal”. According to him the fact that the book is of workers’ struggles is evident in the detailed attention to the various struggles that workers have embarked upon in this country. He further stated, “the fact that the book attempts to represent a workers’ manifesto is prominent from the cover to the back page of the book.”

He ended the characterization of the book by saying that if the book were to have another motto or slogan; it would have been something like: “On socialism we stand”.

He did not conclude without pointing out some missing areas that would have made the book better. This includes the absence of index which he said, “robs the reader of a rapid access to the wealth of names of historical individuals, institutions and events that are locked in hundreds of pages”. He also observed that the book does not capture the role of women in the struggle of workers and the general struggle for liberation. He however commended the resilience of the DSM in the struggle of the working people and re-emphasized the historical importance of the book for workers and youths.

While presenting the book, Lanre Arogundade described it as a documentation of various narratives of the endeavor of the DSM in the past and highlighted the importance of the book. First, according to him, the book puts the organisation history in perspective. Secondly, it documents how various political and socio-economic realities or developments have borne out the correctness of our socialist and Marxist ideas. Thirdly, the book also serves as educational and mobilization documents for advanced layers of youths and workers. Fourthly, it also serves the purpose of clarifying our ideas especially this period of contention of ideas on different issues. Finally for the present younger generation it narrates the work of the organisation in the past and further serves as an invaluable tool in the task in effecting a socialist revolution in Nigeria in place of capitalist rot. 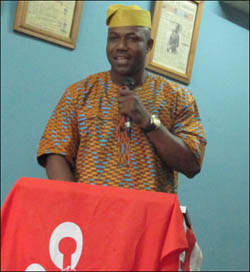 The chairperson of the occasion Dele Hunsu, President of the National Union of Textile Garment & Tailoring Workers of Nigeria (Textile Labour Union), commended the steadfastness of DSM in the struggle against the oppression and for working class political alternative starting from the military dictatorship till today. He appreciated the roles of Joint Action Front (JAF) and DSM in goading Labour into action against anti-poor policies of the government. He especially cited the roles of JAF and DSM in the January 2012 struggle against fuel hike under guise of removal of the so-called subsidy.

Other speakers at the event were Abiodun Aremu, JAF Secretary and Sylvester Odion, a member of the editorial board of the Guardian, both who commented on the roles of imperialism in Nigeria and the imperative of working class alternative.