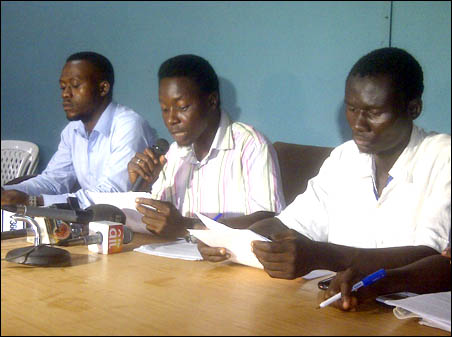 The press conference was organized for the purposes of introducing the #SaveLASU Campaign and to shed light on the recent crisis that has bedeviled the Lagos State University as well as to discuss and bring to the fore the root cause of the crisis.

It would be recalled that the Education Rights Campaign initiated the #SAVE LASU Campaign alongside the Students’ Union Executive-Elect of the Lagos State University, the leadership of National Union of Lagos State Students (NULASS), radical and progressive groups in LASU. This was a product of two public meetings on the crisis rocking the Lagos State University organized by the Education Rights Campaign (ERC) on the February 2nd and February 8th 2014. The public meetings drew together students of LASU, who are embittered with the obnoxious fee regime in the university and the arbitrary administration of the university, which led to the spontaneous protests upon which the university was closed. 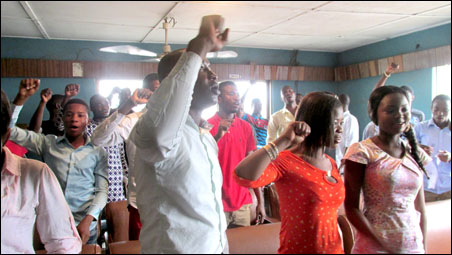 Students at the Press Conference, photo by DSM

Keye Ewebiyi, former General Secretary of the Students’ Union of the Lagos State University and member of the ERC, who moderated the press conference challenged the media to break the silence over the underlying root of the crisis in LASU and support the #SAVE LASU campaign in achieving its demand for the reversal of the fee increment.

ERC National Coordinator, Hassan Taiwo Soweto, thereafter read the press text which was started with the introduction #SaveLASU and its commitment to struggle to ensure that the outrageous regime of fees which has endangered the university with rapid decline in student enrolment and looming sack of workers is reversed. He gave various statistics that reveal very scary situation of things at the university.

According to Soweto “the APC’s megacity agenda is a mega fraud to create a Lagos for the rich only. Megacity means Mega fees in LASU, it means Mega profit for the rich and Mega suffering for the rest of us. We in the ERC and the #SaveLASU movement have also decided to give them mega protest and mega resistance until our demands are met!” 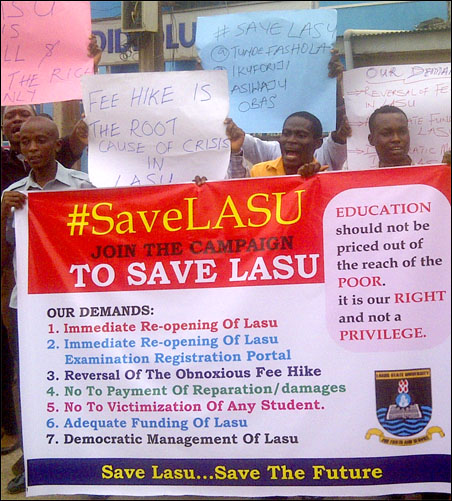 He concluded that the #SaveLASU movement has decided to peacefully march to the Lagos State House of Assembly on Tuesday 18 February 2014 to submit a petition demanding the immediate reopening of LASU and opening of registration portal for students to write examinations, reversal of the fee hike, adequate funding of the university, democratic management of the university, non-payment of reparation and non-victimization of any of the students.

Macaulay Jamiu, the Speaker of the Communications Students’ Association (COSA) spoke next and underlined the fact that Ogun State, which generates a lower Internally Generated Revenue (IGR) maintain three state Universities while the Lagos state government has been unable to maintain its single state university. Fatoyinbo Ibrahim, the President of Communications Students’ Association raised the fact that the proper funding of the university is not beyond the capacity of the Lagos State Government and the reversal of the fee hike is non-negotiable. 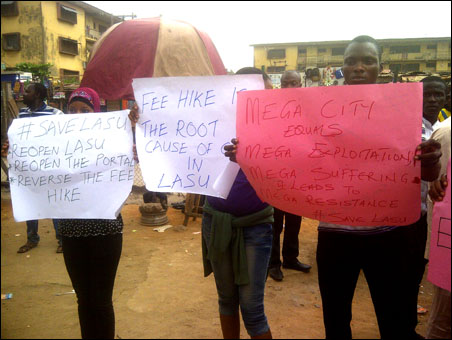 Twenty three media organisations (print and electronic) attended the press conference. Members of the press who commented expressed their deep support for the #SAVE LASU Campaign and urged them to step up mass mobilization. This expression of support from the press shows the widespread sympathy among the broad layers of the working masses that the campaign enjoys.

This was further demonstrated during the course of the mass sensitization rally embarked upon around Ogba area by the #SAVE LASU campaign where okada riders, bus drivers and traders commended the students and encouraged them to keep up the struggle. The student leaders also took time to address the mass of people around the market and the parks on why they were embarking on the protest rally. The rally ended on the note of renewed commitment to mobilise for the protest march to the Lagos State House of Assembly on the 18th of February, 2014. 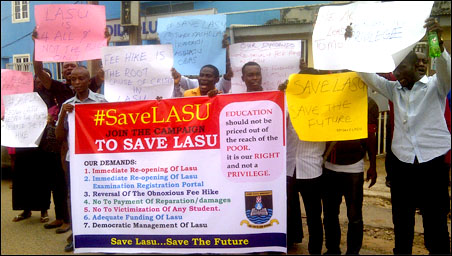 A mass meeting has been fixed for Saturday 15 February 2014 at the ERC Secretariat at No 162, Ipaja Road, Agbotikuyo Bus Stop, Agege Lagos by 10am to finalise preparation and mobilisation for the protest. All those interested in helping to build a powerful movement against fee hike and other anti-poor education policies of the Lagos State Government are encouraged to attend this meeting.